Another Bombshell Report: 150,000 Have Died From The COVID-19 KILL SHOTS, And Corporations Planning For 50% Replacement Of Personnel!

Yes, after yesterday's daily report on the REAL situation of the scam-demic here in Manitoba, I decided to once again take the rest of the day off just to relax and clear my mind.... This entire fraud, which is indeed the GREATEST HOAX in human history has taken its toll on yours truly, especially in terms of being a massive brain drain and I am finding myself having to take time away from blogging just to maintain my own sanity.....

But I am so stubbornly persistent, and I will NOT give up on trying to reach people out there, almost begging them at times, to not take the KILL SHOTS into their bodies.... I am a fighter, and I am not giving up on this fight, period!

Well, I was sent a BITCHUTE video link earlier this morning, and I did indeed want to post up my own article about its shocking findings... But as great minds think alike, my fellow Canadian real truth seeker, Greencrow, who hails from the wilderness of southern British Columbia and writes the excellent blog 'Greencrow As The Crow Flies'  has written an article ALREADY this morning to cover this bombshell report (link here) and I absolutely want to present Greencrow's own assessment of this video and its findings right here for everyone to read for themselves.... I have my own thoughts and comments to follow:

RAH Exclusive: Blockbuster video! 150,000 have died from the Covid-19 Vaccines...Major Corporations are going to have to replace 50% of their personnel 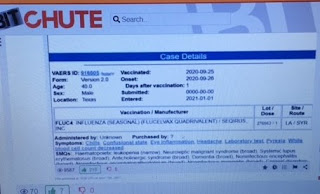 RAH's CoronaGate Channel has posted a new
Exclusive Report on the vaccine genocide -
Give them a "thumbs up" and share!
VAERS Hides Thousand Of Deaths & Job Recruiter Anticipates Massive Casualty Rate For Vaxxed Workers (bitchute.com)

Greencrow says:  Folks.  RAH has "stumbled across" some blockbuster news about the so-called "vaccines".

First, the VAERS US government reporting system is being surreptitiously tampered with.  Certain "adverse events" have been systematically scrubbed from the VAERS reports--and have been replaced with other events where the person has not died "yet".

Secondly, a corporate personnel recruiter/whistleblower reports that she has crunched the numbers and has determined that Massive Gas and Oil Corporations, as well as other Industries such as airlines....are now realizing that they're going to have to replace "roughly half of their personnel" over the next THREE years due to employee deaths from the so-called "vaccines"!  Executives are becoming very alarmed at this catastrophic prospect.

These employees are highly skilled personnel.  RAH correctly comments that this is a looming disaster.

NTS Notes: I again want to thank Greencrow for 'beating me to the punch' on this one... But it does show how great minds do think alike and I am glad that she is a great ally of mine in this war!.

I have periodically read some of the material from 'RAH' and I am glad that he and Greencrow have formed a great rapport on this and other subjects..

But to me, even this '150000' is WAY TOO LOW.... My own estimates, considering the fact that the VAERS data, and both the European and Canadian equivalents, are actually only about 5-10% of the REAL figure... And there is still the African, Asian, Australian, and heck even the South American data that is also not being shown, I honestly see this figure as somewhere in the ONE MILLION range and growing for the entire planet!

Either way, these figures are DEVASTATING, and shows the clear evidence that these KILL SHOTS are a program of mass genocide world wide...

And yes, I too am troubled about the reports that major 'corporations' are now 'getting ready' for the 'possibility' that upwards of '50%' of their entire work force will be destroyed by these lethal injections... That alone should be raising even more 'red flags' everywhere and should be front page news especially all over the alternative media... Basically that action is obviously being done because those 'corporations' are in the loop about this entire fraud and are preparing for the time to come shortly when so many start dying due to these lethal injections...

Honestly, if you are still considering taking these KILL SHOTS into your body, then good luck to that one.   I and others can only show the evidence and the proof that these shots are indeed lethal injections, but everyone still has freedom of choice... If you choose to die, that is indeed your choice.

Posted by Northerntruthseeker at 9:41 AM

I can see the 'murder without consequence' continues unabated. Must be a real relief for these sickos to be able to get away with this planned genocide.

YES "Karmellis!" You are correct! A new
word is needed! The scamdemic is several
orders of magnitude above the "holocaust!"