Must Read: Self-Spreading Vaccines Are NO MYTH - It Is Hard Science; Johns Hopkins University Confirmed Them - COVID-19 Genocide Is Here

This afternoon, I was sent an alert from another of my great and very astute readers to this blog... He said to me that the article, from the link he sent me, was absolutely DYNAMITE, and was a must post at my blog for EVERYONE to see and pass around to others..

I took the time to look the article over, and yes this one is very revealing and shows the TRUTH that the rumours about 'self spreading vaccines' are NOT a myth, and may be the case when we hear so much about people who have been stupid enough to take the KILL SHOTS into their bodies, are indeed being turned into horrific BIO-WEAPONS that are 'shedding' components of the 'vaccine' to others!

I have that article, that comes from Jeff Rense's website at www.rense.com, that is entitled: "Self-Spreading Vaccines Are No Myth... It's Hard Science.  Johns Hopkins Confirmed Them - COVID Genocide Is Here", right here for everyone to view for themselves... I do as usual have my own thoughts and comments to follow:

Self spreading vaccines are no myth. Johns Hopkins University confirms it. See attached page down below. I have their original document.

You'll get the vaccine whether you like it or not.

Self propagating vaccines were conceived by Australian Nobel Virologist Sir Macfarlane Burnet. You know about him. As you know, my interest arose when I bought his former house in 2013 and strange things happened. I looked into his life. I was so shocked, I proposed getting a priest in to do an exorcism the house. No joke.

Burnet with his protégé Sir Gustav Nossal, and the CSIRO, developed the Myxomatosis virus. First used in Australia on rabbit plagues. It was the world's first self-propagating virus that recognized - self, and acted as a vaccine which caused immune suppression. AIDS for rabbits!

Australia is ground zero for the unfolding Covid genocide.

Burnet and William Gates were friends.

William Gates started the William Gates foundation, later renamed the Bill & Melinda Gates Foundation. Burnet's protégé, Gustav Nossal went on to work for the foundation and WHO after Burnet died in 1985. He carried forth the Burnet-Gates Senior plan for genocide.

Gates, Sr. and Burnet conceived and financed the genocidal message on the Georgia Guide stones. Think about that.

The two were friends with the eugenists William Shockley who engaged a friend Dr Herman Kermet to undertake the works incognito. I trust you watched the doco, Dark Clouds over Elberton.

The US bio weapons lab at Fort Detrick commissioned Burnet who proposed unleashing an Influenza Carona Virus on China in 1947. The technology of the time couldn't guarantee no virus blowback, so it was shelved. He was also working for the British equivalent. Burnet was seriously connected

In the late 1970s, the Australian government CSIRO developed CRISPR gene editing for Myrtleford, Victoria tobacco farmers. They originally called it Gene Shears. The science minister of the time, Barry Jones, stated the technology would change the world. It has. We've seen none of the full horrors yet of chimera humans and ethic DNA targets bioweapons which was Burnet's dream.

The CRISPR biotech is being used for the Covid Myxoma self-spreading 'vaccine' bioweapon.

Melbourne, Australia is ground zero for Covid technology and the Gates family plan. It was also ground zero for curfews, lockdowns, freedom of movement denial and mask wearing. The techniques spread around the globe.

Both Burnet and Gates were eugenists connected to the London Eugenics society (rebranded the Gaulton institute to drop the term 'eugenics'). Bill Gates has been marinated in this stuff from his childhood. He is executing the plans of his father and the maniacal Sir Macfarlane Burnet.

In 1967, Burnet wrote 'Endurance of Life' (1978). It received a critical reception for his eugenicist and sociobiological views. It provoked great controversy. Those views included, capital punishment to rid society of undesirables and mentally unfit, abortion for population selection and euthanasia for the unworthy. This particularly included killing the disabled and elderly when they were no longer productive. This is despite he, himself, being 79 when he wrote that book. Burnet's other 13 books he wrote in retirement include almost word for word what we read on the Georgia Guidestones. He wrote the Guidestones tenets with lawyer pal William Gates, who was a close friend of David Rockefeller - see attached photo.

Do you get the picture, Jeff? We are watching a genocidal transgenerational plan unfolding. Bill Gates is executing it on behalf of dead men and others who shared their goals.

This is diabolical. Satanic. Civilization in facing a hugely clear and present danger. 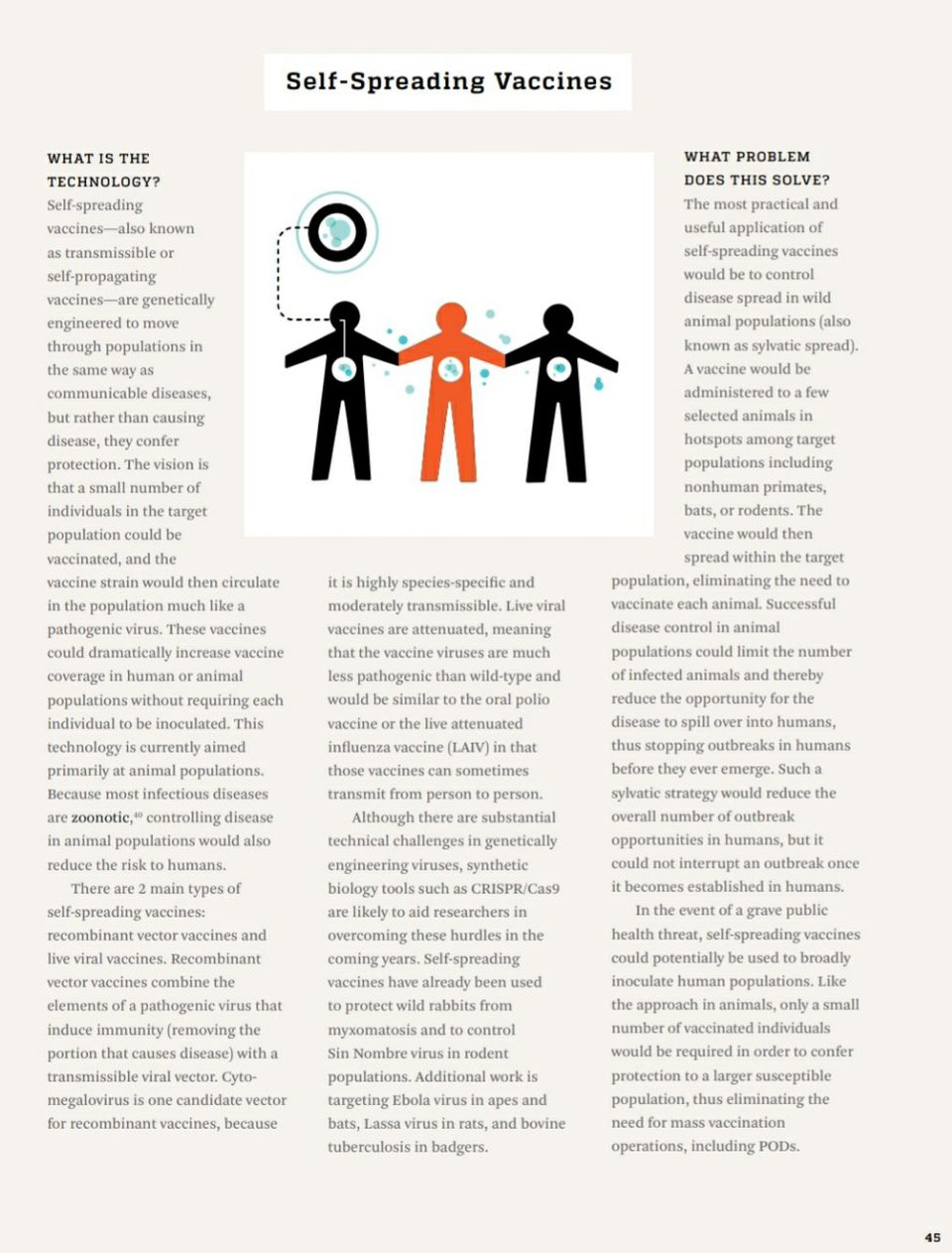 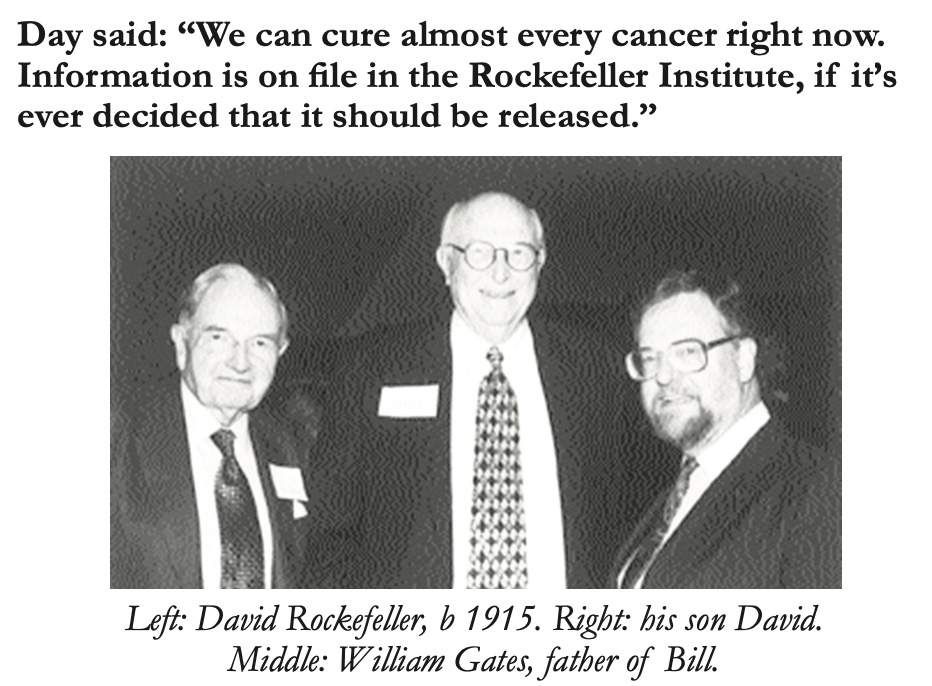 NTS Notes: I had to read this several times over just to get the gist of what this implies, and this is so diabolical indeed..

OK, IF this does 'pan out' and all indications are that this may be very true from what we are seeing as so many women have become very sick in close proximity with the ones who have stupidly taken the 'kill shots', then we are ALL in deep trouble...

And what this implies is that these monsters actually do NOT have to have everyone 'vaccinated' with their kill shots at all, but just a small percentage and then have these idiots, now turned into bio-weapons, do the damage for them by 'vaccinating' everyone else around them!

As Vince states, if this is true then it is Satanic, and diabolical...And to me could spell an Extinction Level Event in the making that could doom all of mankind...  We are indeed dealing therefore with horrible genocidal monsters that care not about humanity.

I will absolutely be doing a lot more research on this one... I have already claimed, like so many others, that idiots that have taken these KILL SHOTS are indeed 'shedding' and spreading their horrendous spike proteins to others... I actually never thought that it could even be conceivable that they could be 'vaccinating' everyone around them as well....

I also do want to hear from readers on this one... Your thoughts are always appreciated in my comment section... And please take this material, like so much else at this blog and FREELY spread it around to alert everyone about this horrible clear and present danger that we all face..

Posted by Northerntruthseeker at 7:19 PM

A hard scientific, data and math based approach to all this covid crap!

Required reading for all!

...and I have already had one of the "vaccinated"
in my house on a service call for a tech issue.
This person insisted I stay away by a distance
of at least six feet. I took a tape measure and
carefully measured the distance. Now, I was only
glad to accommodate. I just hope I gave the SOB
enough distance!

Anything John Hopkins touches is crap. Now I'm wondering about this shedding business.

Never forget. John Hopkins hosted Event 201. They are what I call PerpZ.

the timing of this coming out and making the rounds is suspicious, will this make people think they should take the kill shots since they are going to catch it from the people who took it anyway?

The essence of the most advanced form of warfare is the ability to defeat an opponent, or a population, without having to fight at all. Instead, the master tactician seeks to influence his opponent to surrender without fighting, or, to influence his opponent to destroy himself. This is accomplished primarily through propaganda, subversion, asymmetric warfare (terrorism and insurgency) and most importantly, co-option.
Brandon Smith

I agree that Johns Hopkins tends to stay in line with the criminals.. But they do pride themselves on some accurate data including the graph shown about what is happening in India..

Even the liars do sometimes show a bit of truth, and it is at those times that I like to pounce all over them..

National Vanguard is still dragging their feet on the kill
shots. The narrative now is "if you want one, then get one.
If you don't want one, then don't get one." They are slow.
However, there are signs that they are slowly coming around.

I heard that Bill is divorcing Melinda.

Strange timing. A wife cannot testify against her husband!

Maybe she was so naive that she thought this pedo monster was actually the Saint Francis of Assisi of the modern world.

Of course he's a front for the powers that be. No one would have a geek like him in charge of anything. He was chosen for his total lack of compassion or kindness.

I was at my beer store and some little shit of a manager came up to confront me about my nose being exposed. He want's to impress his female subordinates. Rubber gloved, two masks on and I sent him reeling backward. I regret it but he just set me off. I've been bullied my whole life and it just isn't happening anymore.

I always go out in full mountain regalia. I have my feathered Qiviut cap and my hiking pants with my Android Jones shirt on. I've done mountain peaks that men half my age can't do and will never do.

The MRNA jab has a frequency and that means the vaccinated are transmitting this frequency to the unvaccinated: