I went for my nightly walk to enjoy the waning SUNSHINE just to increase my natural Vitamin D intake  on this a bit colder day here in central Canada.... And just a short while ago I ran into my neighbour's wife and we had a long talk about how both her and her husband went out late last week to get their 'vaccines' aka KILL SHOTS injected into both of them... She stated that she was feeling "OK", but her husband was having some 'issues' since the death jab including how she says he has turned 'moody', a bit 'uneasy',  and all of a sudden quicker tempered... She claims it could just be the 'change in season' but from the reports that I have seen lately about how these KILL SHOTS could indeed be altering the mental state of those stupid enough to take them, I know better than to dismiss it as just a 'change in season' excuse!

OK, I came across the following important report from the Global Research website, at www.globalresearch.ca, thanks to my colleague Greencrow out of southern British Columbia, and I want to share this one with all of my readers here, for the fact that it takes another shot at the absolutely horrendous AstraZeneca KILL SHOTS, as well as the "Johnson And Johnson" KILL SHOTS, that both have indeed been causing horrendous and horrible blood clotting problems in a lot of those out there that have taken these jabs... This article is entitled: "Latest Vaccine Flip-flop Gives the Vaccine Game Away" and is a must read by everyone... I have it right here and of course my own thoughts and comments to follow: 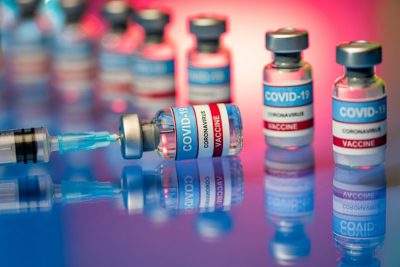 The Astra-Zeneca “cheap and easy to store” “workhorse” vaccine causes blood clots in general, and in particular clots in the venous sinuses of the brain, which have killed or wounded a number of people, especially women under 55.

The European Medicines Agency, the European Union’s regulator, said it is investigating at least 44 cases of the rare brain clots and at least 14 deaths among about 9.2 million vaccinations in 30 European countries...

As of March 29, Germany’s regulator has reported 31 cases of the unusual blood clots in 2.7 million people vaccinated with the AstraZeneca vaccine, nine of whom have died.

The J and J vaccine was associated with blood clots in its clinical trial data presented to FDA.  Both vaccines use an adenovirus vector to deliver DS DNA that codes for spike protein, and human cellular machinery produces this protein, for an uncertain period of time in uncertain quantities. So blood clotting may be due to the adenovirus vector, or to the spike protein, or to something entirely different.

The mRNA vaccines use mRNA to code for the spike, using cellular machinery to produce the spike protein.  The end result of all 4 vaccines is similar, and again, we do not know for how long the body makes this protein.

If the spike itself induces clotting, which is a reasonable hypothesis scientists have put forth, but is unproven, then all 4 vaccines would be thrombogenic (induce clotting). Dr. Patrick Whelan tried to warn the FDA about this possibility, but was ignored.  He wrote:

Meinhardt et al. (Nature Neuroscience 2020, in press) show that the spike protein in brain endothelial cells is associated with formation of microthrombi (clots), and like Magro et al. do not find viral RNA in brain endothelium. In other words, viral proteins appear to cause tissue damage without actively replicating virus.

Is it possible the spike protein itself causes the tissue damage associated with Covid-19? Nuovo et al (in press) have shown that in 13/13 brains from patients with fatal COVID-19, pseudovirions (spike, envelope, and membrane proteins) without viral RNA are present in the endothelia of cerebral microvessels.

This is frightening information, providing a strong hint of the spike protein’s potential toxicity.

How did 20 countries deal with the clotting issue?

First they halted the vaccinations until they could review all the available data and get their narratives aligned. They then decided the A-Z vaccine did cause clots.  But you cannot waste Covid vaccine (unless you are Emergent BioSolutions) so it had to be used.  But in whom?  In poorer countries of course.  But what about the supplies already purchased by western Europe?

The public health leaders came up with a great idea.  Restrict it, just for the elderly.  If they die, there is almost always a preexisting condition to blame. But apparently that wasn’t enough.  So they have started testing this vaccine in children.

France, Germany, Sweden and Canada are among those restricting its use in younger people, while Denmark and Norway have maintained a complete pause.

Can you imagine what the informed consent says?  “We are testing a vaccine known to cause lethal blood clots in children, who almost never get severe Covid–therefore the benefits won’t exceed the risks of the vaccine in this demographic.  Your child is at greater risk of dying from the vaccine than the disease.”  How many parents would sign?  Obviously, there must be lies on the consent form.  Here is a legal case for you British barristers.

As I was writing this, the news appeared that the clinical trials of the A-Z vaccine in children were finally paused, just today. Which is 2-3 weeks after the blood clotting issue surfaced.

How well does the Astra-Zeneca vaccine work in the elderly?  Only two months ago the leaders of France and Germany told us:

Officials in Germany claim the Astra-Zeneca vaccine  is only 8% effective in those over 65. French President Macron has complained to Agence France Press that the A-Z vaccine was only “quasi-ineffective for people over 65.”

So, in order to use up the supply, or perhaps for other purposes, Germany will now use the vaccine only in those over 60, and France will use it only in those over 55 — which are the age groups in whom they claimed it didn’t work.

In case it is not yet clear, this latest flip-flop from Macron and Merkel reveals the truth.  The purpose of the vaccines is obviously not to protect us. The vaccines enrich Pharma. The vaccine passports enable much greater control over the citizenry. There may be additional agendas.  But this is clearly not about our health.

Featured image is from Collective Evolution

NTS Notes: Honestly, I am not surprised by what this report states...But the fact remains that countries such as my own, Canada, are STILL out there shooting up gullible people with these death jabs knowing full well that everyone that receives them are at risk of getting and even dying form these blood clots as well as the long list of other terrible adverse effects!

And yes the revelation that these "vaccines", which are NOT 'vaccines' at all,  are NOT to protect anyone at all is not new news to myself... I have stated for a long time that those who take these shots of death are NOT being protected at all from this 'deadly virus' that simply does not even exist at all but are risking their own lives in what is the greatest mass experimentation on human beings in history...

So again, I have to ask why in the HELL would anyone be stupid enough to put this crap into their bodies knowing that it will result in certain death?   Well, apparently the brainwashing effect from the lying whore media is now so overpowering that people are indeed still falling all over themselves to rush out and have these KILL SHOTS injected into them as soon as they can!   Did I mention that in spite of everything we can do to try to convince people otherwise, you simply cannot fix stupid no matter how hard you try?

And about my neighbour... I will be watching closely and report here at this blog as to what happens with him... I honestly do not want to see him take a turn for the worse, but it was his own choice to have that KILL SHOT injected into his body and we cannot turn back time and stop it from taking place now.... I can only cross my fingers and hope for the best....

Posted by Northerntruthseeker at 10:38 PM

Looks to me like standard practice for the (((monsters))) behind all this.

First, get rid of the older people, Kissinger's "useless eaters". Next, attack the young.

Our own children are brainwashed into believing they're something other than male or female, and offered "medical procedures" that guarantee they'll never have children of their own.

Now (((they're))) injecting poisons into everyone, and especially the very young.

It all fits. Get them while they're young. The precise method doesn't matter. Kill them, sterilise them, turn them queer or "tranny". It's all about preventing those with the capability to depose the tyrant from ever being born.

(Apologies for scrappy writing. In a rush today.)