Mask Meltdowns Show How Crazed The Media Has Made Americans - From Screeching About People Not Wearing Masks To Arresting Those That Refuse, The World Has Apparently Gone Mad

I was out and about earlier today, and once again I was in a local supermarket that demanded  all patrons to wear a face diaper on their faces.... I had to oblige but just out of necessity to get a few food items.. But once again the experience was a bit unnerving...
I was walking down one of the aisles minding my business when I suddenly got a nose itch, which I commonly get from wearing those damn bacteria laden face diapers even after a short time of wearing them, and decided to pull the mask down just a bit to scratch my nose.... Well, the moment I did that a 'KAREN' who I do not know at all came right up to me and with a wild eyed look in her eyes started screaming that I should not be doing that, for I could 'spread the virus to others' (!).... I just turned away from that foul creature and walked away thinking that even after all this time and with the evidence so clear that the face diapers were both useless and were promoting disease, the  power of the lying whore media is still this INTENSE... Honestly,  even though this is sad to say, I did hope that this idiotic 'KAREN' will be one of the first to take the fatal KILL SHOTS and die just to get her out of society.
Well, I was sent the link to the following article earlier today, and it shows the sheer stupidity of the people out there in regards to this face diaper bullshit, and I do want to share it with my own readers at this site... This one comes from the All News Pipeline website, at www.allnewspipeline.com, and discusses how the 'MASK MELTDOWNS' that we see happening is indeed not only caused by the lying whore media, but how the world has gone completely insane thanks to  this entire face diaper stupidity..Here in fact is that article for everyone to see for themselves, and I have my own thoughts and comments to follow:
April 10, 2021

Mask Meltdowns Show How Crazed The Media Has Made Americans - From Screeching About People Not Wearing Masks To Arresting Those That Refuse, The World Has Apparently Gone Mad 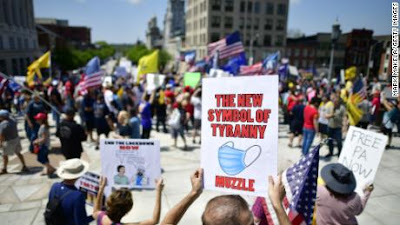 By Susan Duclos - All News PipeLine

Over the past year we have seen some major mask meltdowns, whether from high-on-their-horse liberals screeching about others not wearing masks, to those refusing to wear masks being tackled and arrested for not following the states leaders violating constitutional rights with their arbitrary mask mandates.

The difference as I see the examples shown below is one is howling because people are not allowing people like her to force others to  take an action, such as wearing a mask, and those having a conniption fit in places of businesses because they refuse to let others force them to wear a mask indefinitely.

Liberals love to call those refusing to be forced to continue to comply to mask mandates "Karen's," but a "Karen" is a woman that complains constantly about every little thing, not a woman or man that is standing up and fighting for their freedom to not be forced to take an action that has been decreed by a state tyrannical leader.

Sometimes a million words cannot properly describe the insanity we are witnessing, because it simply has to be seen to be believed.

So, below we will see examples of how crazed people have become, whether freaking out because the media/liberals have them terrified of anyone without a mask, and those willing to refuse to do business, and/or decide to take a very public stand by letting the world see the dictatorial actions of businesses, police, politicians and the media, by trying to force compliance by using fear as a weapon. 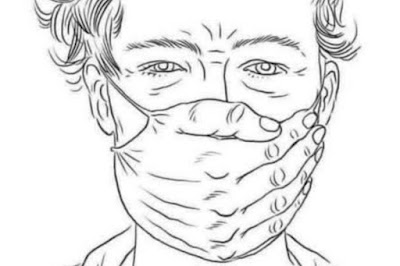 MASK NAZIS OUT OF CONTROL

This less-than-a-minute video below is the most recent found (H/T Stefan for sending it to me), and is a great representation of the insanity we have been witnessing this past year and seems to be getting worse.

Language Alert on all videos.

(ANP EMERGENCY FUNDRAISER: Donations and ad revenue are all that keep ANP online, so please consider donating to ANP to help keep us in this fight for America's future at this critical time in US history. With 'slow-Joe' Biden occupying the White House, and at a time of systematic, 'big tech' censorship and widespread Democrat corruption, truthful media and alternative views are crucial.)


I cannot make up my mind as to whether her attitude or her voice is the most offensive.

This is what the media and liberal state leaders have done to people. They have them petrified, without any rational thought: If they are wearing a mask and believe masks are effective in protecting them, then why should they care if anyone else is? If they do not think wearing a mask is enough protection, then what sense does it make to scream at others to wear one?

These are questions the screaming Mimi's do not bother to ask themselves, because the media has terrified them so badly they are incapable of rational thought.

More examples provided in the short compilation video below of mask Nazi's attacking, berating, lecturing and forcing people to leave their establishments, all because they have been crazed by the media into thinking everyone will die (despite the death rate for COVID being VERY low), if some refuse to allow themselves to be forced to wear masks.

Next up, a man on a plane, originally wearing a face "shield," as the woman that shot the video later says, attacked and forcefully removed from the plane, and arrested, for not wearing a mask along with the shield.

The next one absolutely has to be seen to be believed. Woman in an elevator has a cow because a delivery person in the elevator with her, was wearing a mask, but not properly."

There are so many examples we cannot begin to cover them all, but these are representative of the insanity we are witnessing.

LIBERALS/MEDIA DRIVING US ALL CRAZY

While I will always side with the position of freedom, to decide for ourselves what is best for us and our families, without government or corporate Naziism and tyranny, it is still noteworthy to highlight how this whole mask craze on the part of liberals and pushed by the media, is also driving some conservatives and anti-maskers just as insane.

People are so sick and tired of being forced to wear a mask, still a year after the pandemic began, that they are fighting back, taking a stand, and in some cases, absolutely having their own type of meltdown.

The lady below, pushed to wear a mask while grocery shopping decided to start throwing the items in her cart all over the place while telling the mask tyrants what she thinks of them.

This next one is also an anti-mask woman tearing up the mask section of the local Target, and after she is done, she waits outside and starts saying "baaaaaahhhh," as in calling those wearing masks, sheep.

What is interesting here is that she is also wearing a mask when inside. I guess that was the only way she could get in.

My issue with her, is she is doing exactly what she and others that are sick and tired of mask mandates, complain about, by trying to insist others do what she wants.

Apparently people on both sides of the issue are losing their minds.

Thanks MSM. Thanks Democrats. You people have just caused a significant portion of the population to go nuts.

People should decide for themselves whether or not they should wear a mask when out in public.

If someone is high risk, they may decide to wear it as may their family members, not because of a mandate but because it is THEIR CHOICE.

On the flip side, those that do not wish to wear a mask, does so because, again, it is THEIR CHOICE.

The media/liberals have driven people on both sides of the issue, crazy.

NTS Notes: I have indeed watched many of these videos already, but having them here in this compilation does indeed drive home the fact that the world has indeed gone absolutely stark raving mad thanks to this criminality and brainwashing of this entire scam-demic..
I honestly can not figure out people any more.. .Most are fully aware that something is terribly wrong with this entire scam-demic, and yet they blindly and ignorantly follow the  bullshit 'rules' that the criminals in charge have ILLEGALLY and IMMORALLY forced on all of us...
And I was alerted to some startling news  just the other day where as the criminals in the WHO and other driving this entire scam-demic are indeed wanting to see the wearing of health destroying face diapers made PERMANENT!  This means that unless we do finally force the issue and try to stop wearing these face diapers immediately, then we are going to see the permanent enslavement of us all symbolized by the forced wearing of these useless face coverings...
I for one will continue to resist this wearing of face diapers every chance I can, and hopefully readers to this blog will do as well.... Resistance to tyranny is not futile and we can put a stop to this enforcement of wearing face diapers if we all stand firm and have courage to do so..
More to come
NTS
Posted by Northerntruthseeker at 10:26 PM

Corporate Zionism and tyranny at work.
Khazarian Mafia,the large International Organized Crime Syndicate, getting ready to genocide the White Race.
** 95% of all videos on jewtube are Fabricated reality.
*** "Those whom the gods wish to destroy they first make mad"