THIS Is Diabolical: COVID-19 Detainment Facilities Go From "Conspiracy Theory " To Official Government Policy In 3 Months Here In Canada!

I do have a LOT of American readers, friends, and fellow patriots, that have constantly been telling me that I and others up here in the frozen Great White North aka "Canada" have it 'so lucky' as they claim that we as Canadians do not have the same type of horror show that is happening right now in the formerly free nation called the "United States" thanks to the COMMUNIST take over of America under that heinous SOB pedophile psychopath known as 'President' Joseph Biden...

My answer to my American colleagues is 'Are you kidding??', for the fact that Canada is as bad as the US right now and in some ways much much worse under the criminal and diabolical Justin Trudeau regime in Ottawa that is destroying this nation and destroying what is left of Canadians' rights and freedoms....

And as proof that living in this formerly free nation called 'Canada' is becoming a nightmare, I want to present the following very important report from the "Humans Are Free" website at www.humansarefree.com, that states "COVID Detainment Facilities Go From "Conspiracy Theory" To Official Government Policy In 3 Months"... This is a most important read, especially to my fellow Canadians, and I do have it right here in its entirety for everyone to see for themselves that Canada has turned into a tyrannical state in just a short amount of time... Here is the article, and I have my own thoughts and comments to follow:

“I ask this government if people should prepare for internment camps,” Ontario provincial member of parliament (MPP) Randy Hillier asked the central Canadian province’s legislature during Question Period on October 7, 2020.

During his inquiry over the country’s policy to detain citizens, Hillier’s microphone was cut and he was silenced and told to sit down.

His words would not go unnoticed, however, and the internet picked up on it and the memes began to flow on how Canada was about to start involuntarily detaining COVID-19 patients in government facilities.


It is important to note that Hillier’s claims were blown out of proportion online with disinformation flowing freely about children being taken from parents to people being held in these facilities “for the rest of their lives.” None of this is true.

Predictably, the “Fact-Checkers” picked up on the obviously false claims and came out in full force referring to Hillier’s statements and the memes that followed as a “Conspiracy Theory” that is “Totally False.”

Yes, many of the claims were totally false, however, government-run quarantine facilities are allowed in Canada under the Quarantine Act, passed in 2005 under prime minister Paul Martin.

In June 2020, the federal government issued its third order requiring every person entering Canada to quarantine for 14 days.

The pushback against the online “conspiracy theories” were that these quarantine sites were “voluntary” for Canadian citizens.

The federal government has announced funding for voluntary quarantine sites for some of the country’s homeless and has made plans to expand self-isolation capacity for returning international travelers without suitable places to go, but Canadians will not be compelled to leave their homes for so-called COVID “camps,” a spokesperson for Health Minister Patty Hajdu told CBC News in October to dispel the conspiracy theories.


In October, Prime Minister Justin Trudeau even responded, saying that the claims of mandatory COVID-19 detainments were “harmful misinformation.”

“Unfortunately there is a tremendous amount of noise and harmful misinformation about [the pandemic] on the Internet,” Trudeau said.

“The answer is no, we’re not building containment or internment camps,” the Health Minister spokesperson said in a statement.

That was in October and over the months, the government has moved the goal post on how travelers are treated.

Now, even travelers with negative tests will be forced to quarantine at their home under government surveillance.

While this is only for those engaging in international travel, as we’ve seen, the goal post moves.

“Those with negative test results will then be able to quarantine at home under significantly increased surveillance and enforcement,” Trudeau said in a press conference last week.

In regards to the “increased surveillance,” this will include home visits from private covid security personnel.

“There will be increased security contractors that will do more, I would say, ‘door knocking’, to check on people who are in quarantine,” said Dr. Theresa Tam, Canada’s chief public health officer, on Friday, adding that the contractors would start in 35 Canadian cities and would expand farther in the coming weeks.

But it gets worse for those who test positive. Remember, three months ago, a positive test would mean a “voluntary” quarantine at a government facility. “Mandatory” confinement was a “conspiracy theory.” But it is not anymore.

“Those with positive tests will be immediately required to quarantine in designated government facilities to make sure they’re not carrying variants of potential concern,” Trudeau said of the new measures.

“Immediately required” does not mean “voluntarily.” It means that citizens will be forced into these facilities. Calling them “mandatory government facilities” instead of “internment camps” is a matter of semantics.

Internment is defined as the state of being confined as a prisoner, especially for political or military reasons. Does that not sound like what Trudeau said in the statement above?

See the shift in policy happen in the video below: 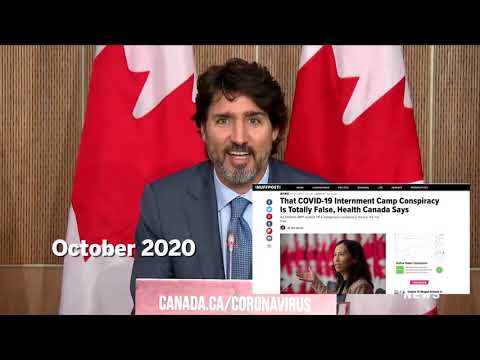 Indeed, according to the government’s own website, violators will be imprisoned.

Violating any instructions provided to you when you entered Canada is an offence under the Quarantine Act and could lead to up to:
6 months in prison and/or
$750,000 in fines

If you break your mandatory quarantine or isolation requirements and you cause the death or serious bodily harm to another person, you could face:
a fine of up to $1,000,000 or
imprisonment of up to 3 years or
both

This is and has been the nature of the state since the beginning of the pandemic. The police state measures are being incrementally rolled out.

Had they attempted all of this back in March, rest assured that there would be massive resistance with bipartisan support. Now, however, team doom is cheering it on.

“It’s excellent. It’s a shame it’s this late. This is something they could have done ages ago,” said Dr. Andrew Morris, a professor of infectious diseases at the University of Toronto and the medical director of the Antimicrobial Stewardship Program at Sinai-University Health Network.

“This is definitely a step in the right direction.”

Those who remember history, however, would disagree.

Now, this conspiracy theory from three months ago is being used in reality today.

“I was escorted by police to a shuttle bus and taken to this hotel, which is fenced off from the public,” a man told the Toronto Sun after the Public Health Agency of Canada didn’t accept his results from a rapid test — which was negative — and ordered him detained until the results of their own test were known.

“It definitely has a detention centre feel to it,” the Sun reported. “There is a barrier preventing anybody from coming and going and a security detail checks every vehicle entering the property.”

“You will have to forgive Steve Duesing for not believing there are no COVID-19 internment centres in Canada…. I’m in one,” the 34-year-old Scarborough man, named Steve, told the Toronto Sun on Tuesday after becoming one of the detained.

“I was told when I arrived (at Pearson International Airport) Sunday night from Charlotte that it was either three days quarantine or go to jail.”

So he was escorted on a shuttle bus from Pearson to the nearby Radisson Hotel on Dixon Rd. But this is no normal hotel stay.

“I am not allowed to leave the room,” he said. “There is a guard at the end of the hall.”

Just like a prisoner, he gets water sent up and a ham sandwich.

Steve is not an isolated incident. On his flight alone, he says eight other people were hauled off as well.

“Some cried and said they would lose their jobs or didn’t have babysitters,” he said.

“There was no leniency. They were no longer free. They were ordered into government custody,” the Sun writes, and they are correct.

If you think that this will not happen here in the United States, think again.

NTS Notes: Well, readers, there you have it... Living in Canada has now turned into a living hell thanks to the criminality of the Justin Trudeau regime and his insane 'policies' based upon a 'deadly virus' that simply DOES NOT EVEN EXIST!!

To me, much of these 'detainment facilities' had to have been planned a long time in advance and I will bet anything that these were indeed on the 'table' long before this BULLSHIT scam-demic even began...

And yes, Ontario MLA Randy Hillier was ABSOLUTELY RIGHT when he presented to the Ontario Legislature over 3 months back his findings into the building of detainment camps across Canada, and at that time tried his best to warn Canadians that the diabolical Trudeau regime was indeed proceeding forward with the placement of those 'camps' right across Canada...  He caught Trudeau and his demonic sick freak minions in the lie then, and he has been proven so right all along!

And yes, this is just one of the many steps towards the ending of personal rights and freedoms in this nation of mine, the formerly 'free' country called 'Canada'.... I can guarantee that these pricks in charge will not let a good 'scam-demic' go to waste and that they are planning even more diabolical 'laws' and 'rules' against the Canadian public INCLUDING MANDATORY inoculations of their deadly EXPERIMENTAL genetic modifying concoctions (Please, no more insults by calling this garbage 'vaccines' for they are NOT!) for everyone.....

And as the article closes, if anyone living in the also formerly free nation called the United States does not think that this type of diabolical destruction of personal rights and freedoms could not happen to them, they had better think again....

Posted by Northerntruthseeker at 11:06 AM