Could THIS Spell The Beginning Of The End To Illegal Lockdowns Over This Non-Existent Deadly Virus?: The Netherlands Government Has Been Ordered To Lift Illegal Pandemic Curfews By The Hague Court!

It has nearly been a year now with these non-stop and incessant 'restrictions' and "lockdown measures' here in what used to be the free nation called 'Canada'.... Everywhere you look these days, businesses have either gone bankrupt or are on the precipice of going under thanks to the heinous and ludicrous "lockdown orders" because of a ' health scare' due to a 'deadly virus' that simply does not exist... It is to me insanity, as people everywhere I look have simply had enough of this stupidity and do want their lives to actually return to NORMAL rather than this horrible 'new normal' that our governments want to impose on everyone permanently...

But there is some good news elsewhere on planet Earth, as apparently the Dutch government in Amsterdam Netherlands has been ordered by a top court in The Hague south of Amsterdam, to immediately lift the lockdown of the Dutch people that has been in place now for nearly a month in the form of draconian 'curfews' imposed on them since January 23rd of this year.... .

Here in fact is details on this very important action in The Netherlands, thanks to an article from Tyler Durden over at the Zero Hedge website, at www.zerohedge.com... This article is entitled: "Far-Reaching Violation": Dutch Govt Ordered To Lift 'Illegitimate' Pandemic Curfew By Hague Court" and I have it right here for everyone to see for themselves... I do have further thoughts and comments to follow:

A top court in The Hague issued a "shock" ruling that curbs the power of civic authorities to impose sweeping coronavirus-related curfews which should have significant reverberations legally for similar scenarios in other countries.

"The curfew must be lifted immediately," the court said in a statement, underscoring that the Dutch government is abusing its powers by violating freedom of movement and assembly in particular. The pandemic curfew must be reversed immediately, the government has been told, which comes after weeks of fierce protests by an angry population which seems to have rejected it in unison. 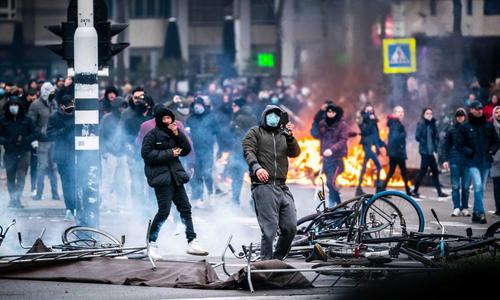 In the official court statement, the Hague deemed the invocation of the Extraordinary Powers of Civil Authority Act to impose a national curfew is not justified on the basis of the COVID-19 emergency. The law allows the government to circumvent normal legislative channels to impose curfew in "very urgent and exceptional circumstance".

"The Preliminary Relief Judge ruled that the introduction of the curfew did not involve the special urgency required to be able to make use of the [act]," the Hague said. One key issue cited is that the government had plenty of time to discuss and consider such a curfew through the normal legislative process, thus "the use of this law to impose curfew is not legitimate," according to the ruling.

The Netherlands' curfew had been among the most draconian in Europe and the world. While early in the pandemic during the first wave of lockdowns a number of countries had imposed such curfews, since January 23 Dutch citizens wereordered to remain home between the hours of 9pm and 4:30am, which would result in steep fines if violated. It was to be in effect until March 2.

While there were "exceptions" in cases of medical emergencies or work deemed "essential", Dutch citizens by and large were outrage, expressing their frustrations through multiple nights of protests and rioting, which resulted in hundreds of arrests.

The Hague ruling was triggered by the Virus Truth Foundation filing a lawsuit which sought to get the curfew overturned as a violation of civil rights and the national Constitution.

Meanwhile, in a sign of a continuing legal fight to come... because "science":

Virus Truth Foundation noted on its website, "We fight for the preservation of a democratic constitutional state in which our children still have the opportunity to develop themselves in freedom and to live a life with their own beliefs and opinions." It's hailing the ruling as a major victory.

Crucially this had been the first such curfew imposed on The Netherlands since World War II, which is in part why it was greeted with such hostility among the public. Demonstrators noted it was neither wartime, nor is the country under threat of invasion.

NTS Notes: I also see that my great Canadian fellow real truth seeker, Greencrow, who hails from the wilderness and probably much warmer parts of southern British Columbia, has picked up on this important situation in The Netherlands and has posted an article about it at her website...Here is the link to Greencrow's article here:

And honestly I am not shocked at all as I have been wading through the lying whore media outlets over the last while to see if ANY of them have picked up on this most important situation happening right now in The Netherlands... And no shock to me at all that there are NONE!!!

And the implications from what has just happened in The Netherlands could and should be felt across the planet... For if The Netherlands criminal government is forced to stop their madness of destroying the lives of the Dutch people, then people elsewhere should and WILL take notice and possibly take their own governments to court and force their governments to stop the madness against their own citizens as well...

It is time for  everyone to take notice of this most important action that just took place in The Netherlands.... If we ever are going to stop these criminal fuckers from destroying what is left of our countries and our very lives, then similar action to what just happened in The Netherlands must happen NOW!

Posted by Northerntruthseeker at 6:27 PM