The COVID-19 Bullshit: Canadian Federal And Provincial Leaders Prove That Mask Wearing Is A Complete Scam!

I just do not get it with the people around me.... I am watching as more and more of the most stupid people imaginable right here in central Canada are surrendering to the BULLSHIT put out by the criminals in the Jewish controlled media and are now donning those fucking ugly and ludicrous "face masks" everywhere I go these days....

I continue to try to hammer into their thick skulls the FACT that those 'face masks' ABSOLUTLEY DO NOTHING to stop ANY 'viral infections' at all, and in fact are the worse thing imaginable that they can put on their faces for the fact that they restrict proper Oxygen supplies to their bodies and are nothing but cesspools for every type of bacteria and other infectious organisms out there to fester and infect their bodies.... It has gotten to the point now that these idiots simply do not give a damn, and have fallen permanently under the criminal spell of brainwashing.... These idiots will of course be the first ones to gleefully line up like the dumb ass sheep they truly are to be injected with the 'vaccines' that are definitely coming!

Well... Today I came across a most startling report from the criminals that run the Canadian Broadcasting Corporation here in Canada, and I do want to share its important contents with my own readers here... This article, from the CBC website at www.cbc.ca, states that apparently Canadian Conservative Party leader, Andrew Scheer, was caught just the other day sitting in Pearson International Airport in Toronto Ontario, with none other than Manitoba Premier Brian Pallister, in the terminal awaiting their flights out of Toronto, and BOTH were NOT wearing "face masks" at all!   Here is that article, and I do have a lot more to say afterwards:

"Andrew Scheer spotted without a mask at Toronto's Pearson Airport

Conservative Leader Andrew Scheer was seen at a departure gate at Toronto's Pearson Airport today without a mask on — an apparent contravention of the rules that apply to all travellers passing through the terminal.
The airport's website stipulates that "all passengers and airport employees" must wear a mask or a face covering "at all times." The mandatory mask rule has been in place since June 1 to stop the spread of COVID-19 among the travelling public.
"This includes the pre- and post-security screening areas of the terminals, parking facilities, people mover train, sidewalks/curbs outside the terminals and other outdoor public areas," the airport rules say.
There are exceptions for people under the age of two, travellers who are unable to remove a face covering without assistance and for people who have trouble breathing. Masks are not required for travellers dining at food and beverage locations.
A number of pictures surfaced on social media Tuesday of Scheer speaking to Manitoba Premier Brian Pallister and others while waiting to board a flight. Pallister also appears to have his mask off while speaking to Scheer in the terminal.
A spokesperson for Scheer confirmed to CBC News that the pictures of Scheer were taken today.
"Mr. Scheer wore a face mask while travelling to Ottawa today. He removed it to make a phone call. This picture must have been taken before he put it back on," said Kelsie Chiasson, acting director of communications for Scheer.
The pictures do not appear to show Scheer talking on the phone. 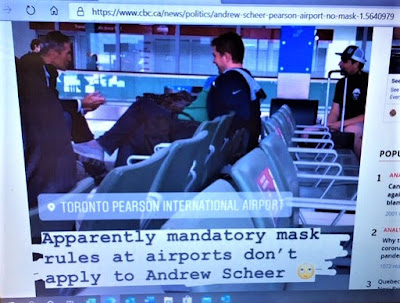 Screenshot of Andrew Scheer NOT wearing
a Mask at the Airport

Premier Pallister told CBC News his maskless moment was a lapse in judgment.
"I lifted my mask to join some friends in conversation at the Toronto airport this afternoon," he said in an email statement. "It was an error on my part, it won't happen again."
Social media users asked Pearson's Twitter account if masks were still required after the Scheer pictures surfaced.
"They are! All travelers and employees inside the terminal must wear a mask or face covering," the airport's account said in response."

NTS Notes: WHY am I not in the least bit shocked by this report?

The reality is that I can guarantee that ALL of Canada's so called politicians and criminals in charge are fully well aware that the enforcement of "face mask wearing" on the gullible Canadian public is a complete sham and an absolute LIE!

And for that gawd damn criminal, Brian Pallister, to say to the CBC that his "lapse of judgment" is another bold faced lie.. For that fucker is fully aware as well of this entire scam, and that face masks are the most idiotic things imaginable.... But he is part of the criminal push for us all to be vaccinated, and therefore had to cover his tracks with that 'statement'...

And I am not alone in seeing this "in your face" proof that the entire face mask push is a scam.. For Greencrow herself has a most excellent article covering this mockery, and I have the link to her article here for all to see for themselves:


I must agree with Greencrow on this one.. This is nothing but a complete joke and nothing than pure buffoonery...

The sad part is that this is being inflicted on the Canadian people, and they have been so heavily indoctrinated now by the liars in the Jewish controlled media that they are beyond hope of ever waking the fuck up now!

I do hope that others see the clear message here... We are being royally screwed by our own sicko government officials and especially by the consummate liars in the Jewish controlled media at a horrific pace.... People here in Canada do desperately need to wake the fuck up now!


Posted by Northerntruthseeker at 11:26 AM