While We Have Been Distracted By COVID-19 Bullshit: I Knew It! Palestinians Will Have NO Rights When Israel Illegally Annexes West Bank!

I once again want to turn to some  REAL important news that is happening right now while we have been purposely distracted by COVID-19 bullshit......

I have been stating in my last few Sunday weekend rants that the psychotic state of Israel is about to proceed forward with their evil and sinister plans to annex ALL of the occupied West Bank while everyone is being purposely distracted by the pandemic bullshit.... And I stated that under these plans for annexation, the 3 MILLION Palestinians that are right now living in the occupied West Bank will have NO rights as citizens under the evil "Greater Israel" project as the psychotic Jews in Israel are the ONLY ONES who have any "rights" in that twisted and sick state....

I had a few emails about that statement claiming that I was wrong and that the Palestinians would actually be "incorporated" into "Greater Israel" and would have some form of both autonomy and rights.... I said to those people to watch and see, for we shall soon find out how truly evil the Israelis are in their treatment of Palestinians and how they would treat them once they get all of the West Bank incorporated into their twisted state....

Well, lo and behold, but I was ABSOLUTELY RIGHT in my claims that the Palestinians would have NO chances for "citizenship" in the psycho state of Israel..... For according to the following report that comes from the Global Research group at www.globalresearch.ca, apparently that most evil and sinister criminal on planet Earth, Benyamin Miliekowsky aka "Netanyahu" let it slip in a recent statement that the Palestinians would be labeled as "subjects" and NOT citizens at all... Here is that article for everyone to see the bitter truth for themselves, and I have my own thoughts and comments to follow:

Israel’s Netanyahu Says the Quiet Part Out Loud: Palestinians to be “Subjects,” Not Citizens in Apartheid Annexation 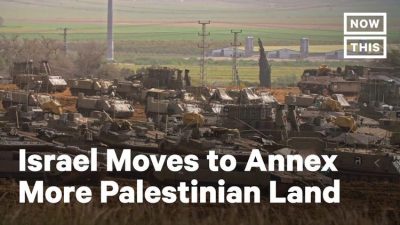 In an interview with corrupt casino mogul Sheldon Adelson’s free newspaper, Israel ha-Yom, Israeli prime minister Binyamin Netanyahusaid the quiet parts out loud.
Although he did not use the word, he described an Apartheid regime in the Israeli-controlled Palestinian West Bank.
He openly referred to the stateless Palestinians as “subjects.”
Netanyahu will annex the Jordan Valley formally to Israel, where 60,000 Palestinians live and which is one of the areas Israel had pledged to relinquish to the Palestine Authority in the 1993 Oslo Accords. He will also annex the land on which Israeli squatters established settlements in Palestinian territory.
Israel ha-Yom asked, “Q: Nevertheless, several thousand Palestinians live in the Jordan Valley. Does that mean they will receive Israeli citizenship?”
Netanyahu replied:

“No. They will remain a Palestinian enclave. You’re not annexing Jericho. There’s a cluster or two. You don’t need to apply sovereignty over them, they will remain Palestinian subjects if you will. But security control also applies to these places.”

How about if we won’t?
I have long argued that the crux of the Israeli conflict with the Palestinians is the denial to Palestinians of citizenship in a state. In calling the Palestinians “subjects,” Netanyahu is acknowledging that they are not citizens. In Hannah Arendt’s phrase, citizenship is the right to have rights. Palestinians have no citizenship in a state. They do not have a right to have rights.
They are subjects, they way medieval people living under an absolute monarchy were subjects. Only democratic states really have citizens.
The Israeli right wing is afraid that Netanyahu, in leaving un-annexed the rest of the Palestinian West Bank, is acceding to the demand for a Palestinian state. These fears are exacerbated by Netanyahu’s championing of the Kushner plan for the Mideast, which does contain language about a Palestinian state, although as described it isn’t actually a state.
It is what was called in Apartheid South Africa a Bantustan.
Netanyahu admitted as much, saying of the Palestinian leadership:

“They need to acknowledge that we control security in all areas. If they consent to all this, then they will have an entity of their own that President Trump defines as a state. There are those who claim and – an American statesman told me: ‘But Bibi, it won’t be a state.’ I told him, call it what you want.”

I said at my Hisham B. Sharabi Memorial Lecture:

“Statelessness means the complete lack of citizenship in a recognized state. It means you don’t have a passport; you have a laissez-passé. That means a lot of countries won’t accept the laissez-passé. It means you can’t travel freely, you don’t have constitutional protections, you often can’t get a work permit, your property is not secure because people can take it away from you and you don’t have access to national courts that could adjudicate those disputes . . . what does a state do? It controls land, water, air. If a North Korean MiG flew over San Diego, all hell would break loose . . . If an Israeli plane flies over the West Bank, eh? Not a state. If substantial water resources, a river or something, were expropriated by Canada, there would be trouble because that’s America’s water, it’s owned by the federal government. But if 85 percent of the water on the West Bank is diverted to Israeli settlers, that’s all right because there is no Palestinian state. The water doesn’t belong to anybody. It’s a no-man’s land. States control immigration. But the Palestinians would deport somebody, how? There are lots of [Israeli] undocumented people on the West Bank, but their state is behind them.”

As for the notion of a “Bantustan,” here is what the Wikipedia article says:

“Under the Bantu Homelands Citizenship Act of 1970, the Government stripped black South Africans of their citizenship, which deprived them of their few remaining political and civil rights in South Africa, and declared them to be citizens of these homelands . . . he process of creating the legal framework for this plan was completed by the Black Homelands Citizenship Act of 1970, which formally designated all black South Africans as citizens of the homelands, even if they lived in “white South Africa”, and cancelled their South African citizenship… Bantustans within the borders of South Africa were classified as “self-governing” or “independent”. In theory, self-governing Bantustans had control over many aspects of their internal functioning but were not yet sovereign nations. Independent Bantustans (Transkei, Bophuthatswana, Venda and Ciskei; also known as the TBVC states) were intended to be fully sovereign. In reality, they had little economic infrastructure worth mentioning and, with few exceptions, encompassed swaths of disconnected territory. This meant that the Bantustans were little more than puppet states controlled by South Africa. Throughout the existence of the “independent” Bantustans, South Africa remained the only country to recognise their independence.”

Palestinians in the Jordan Valley are about to be made like the Black South Africans who lived in South Africa but were declared aliens in their own country and assigned to a toothless, puppet-like “Bantustan” for their citizenship. That is what Netanyahu means when he calls them “Palestinian subjects.” Bantustan subjects.
In those areas that the Israelis are not (so far) annexing, Palestinians are still under the security control of the Occupying Israeli military. But, again, they have no citizenship in a state. Israel makes policies for them, but they cannot vote on those policies. They are stateless. As for the Palestine “Authority,” “call it what you will.” It is not a state. It will not be allowed to undertake the functions of a state.
I said in 2013 that you can’t keep 5 million people stateless forever, that this is monstrous. but apparently you can do so for many decades, maybe a century or more.
Shame.
*
Note to readers: please click the share buttons above or below. Forward this article to your email lists. Crosspost on your blog site, internet forums. etc.
Featured image is from Informed Comment
The original source of this article is Informed Comment
Copyright © Juan Cole, Informed Comment, 2020

NTS Notes:  I really do  hate being right about this one, for the lives of 3 Mllion innocent people are at stake and will have ZERO futures at all when the sickos in Israel annex their territory!

And lets be honest here... The term "subject" is actually 'SLAVE', and that is exactly what the sickos in Israel see as the future of the Palestinians... No rights, no freedoms, is absolutely much the same as being nothing more than SLAVES!

Readers have hated it for years when I have been telling them that the Palestinians can have NO future as long as the state of Israel exists in its present context and its treatment of the Palestinian people... The "Zionist" movement has been one of pure evil intention for over a century and has been  hell bent on the sick and racist policies of seeing the sick and twisted state of Israel not only formed out of lands that belong to the Palestinians but has always clearly wanted to expand that territory as well.....  And in that sick and twisted concept, there is NO room at all for other people as those people will either be forced to flee for their lives and live in exile or to be made "non citizens" and nothing more than SLAVES......  Under those conditions there has been absolutely NO real option for the Palestinian people, for the choices are either to fight for their rights, or to choose between being destroyed OR as what is clearly shown above which is to be slaves for eternity!   And people wonder why I say the Palestinians MUST fight back against such evil and fight back as hard as they can..... It is either fight or be destroyed and given those choices I know which one I would choose in a heartbeat!

I dare anyone to see this any differently... The Palestinian people will have NO future as long as the evil and twisted leadership in Israel exists...


Posted by Northerntruthseeker at 7:20 PM

And while America is being torn apart look at what congress just passed..