The COVID-19 Bullshit: New Report From Russia Today Shows Suicide Rates Are Skyrocketing, And So Called Health Officials Knew It Would Happen And Allowed It To Happen!

I did go over to the Manitoba Legislature this afternoon, but decided just to drive by at around 1345hrs this afternoon just to see if there was anyone gathered today for a possible lockdown protest rally... There were in fact a few people milling around, but no action today... And the fucking police and the GOONS that were there last week were there once again to obviously try to disrupt anyone that wanted to practice their rights under the Canadian Charter of Rights to peacefully assemble...I passed by and just slowed without stopping and then went on my way in disgust.... This is what has happened to freedom and democracy here in this province of Manitoba, and overall I am indeed deeply disappointed...

Anyways.... I want to attack once again the fuckers in our governments and those bastards in the Jew spew media that have been bombarding everyone with their bullshit propaganda about this 'virus' that most definitely is a massive fraud.... The most gullible out there that swallow what is said on the idiot boxes aka "talmudvisions" are the weak minded in our societies and obviously they have been the primary target of those freaks that want this "pandemic" in place until they come up with their fucking vaccines that they want to jab those stupid people with....And sadly, their criminal efforts have worked, and with horrible consequences...

Once again, my great colleague, Greencrow, has been attacking this fucking fraud pandemic head on and yesterday she showed clear evidence that this fraud has caused a skyrocketing rise in suicide rates...I posted my own article earlier that showed Greencrow's material and the original link to the report from Zero Hedge about how appalling that had become....

Now, I do want to follow up that report about skyrocketing suicide rates thanks to the fuckers running this pandemic scam, with another report... This time from Russia Today at www.rt.com..... This one shows how medics are now sounding the alarm that the suicide rates in the United States (and Canada as well..) have been skyrocketing and that the idiot health officials have ALLOWED THIS TRAVESTY TO HAPPEN!!!  Here in fact is that Russia Today report right here in its entirety, and I have further thoughts and comments to follow:

Deadlier than Covid? Medics sound alarm as lockdown suicides SOAR in US – and health officials knew it would happen

After two months of devastating lockdown, doctors at one California clinic say they’ve seen more suicides than Covid-19 deaths – and they’re not alone. But warning signs were there since day one. Why have they been ignored?
“We’ve seen a year’s worth of suicide attempts in the last four weeks,” Dr Mike deBoisblanc, lead trauma surgeon at the John Muir Medical Center in Walnut Creek, California, told local media on Thursday, confirming the center had seen more deaths from suicide over the two-month lockdown period than deaths from coronavirus.
Not only are the numbers of attempts “unprecedented” but so is their seriousness, according to a trauma nurse at the clinic. “I have never seen so much intentional injury,” nurse Kacey Hansen attested, adding the deaths are mostly young adults who are clearly not making “cry for help” suicidal gestures. “They intend to die.”
ALSO ON RT.COMLockdown-inspired suicides on course to DWARF coronavirus deaths in Australia & in time, even in US – studies

That’s just one clinic, of course, and it might be dismissed as an anomaly if not for the fact that doctors across the country are sounding the alarms, warning Americans’ health – mental and physical – is deteriorating rapidly under lockdown, and not because of Covid-19. Over 500 physicians signed a letter to President Donald Trump earlier this week pleading with him to end the economic shutdown, which they called a “mass casualty incident.”
The signatories warned that as every last medical resource is devoted to the pandemic, not only are cancerous tumors going undetected and risk factors for heart disease and stroke multiplying, but suicide hotline call volume is up a shocking 600 percent. With these factors plus economic depression and stress feeding on each other, hundreds of millions of Americans are in very real danger of losing their lives over the next several months. This secondary pandemic unfolding in the long shadow of the Covid-19 shutdowns will be significantly more deadly than the virus itself.
This shouldn’t be news for the public health officials who crafted the lockdown policy. The warning signs were there from the very beginning. Suicide hotlines were already being flooded with calls just two weeks into the shutdown. In one 48-hour span in March, Knox County, Tennessee, saw nine suicides – more than the entire number of virus deaths in the entire state at that point. Portland, Oregon police said suicide threats and attempts had jumped 41 percent from the previous year, while one national suicide hotline reported a 300 percent increase in calls – again, in the first two weeks of lockdown. Trump himself warned back in March that the lockdown would cause “suicide by the thousands,” only to be pooh-poohed by his own CDC and mocked by the media. And even the World Economic Forum was sounding the alarm back in early April about a coming mental health epidemic, deeming the massive global lockdowns the “world’s biggest psychological experiment.”
ALSO ON RT.COMAs someone battling depression, I know how much the mentally ill are suffering during the Covid-19 lockdown

Instead of heeding these red flags, public health officials pushed along with their draconian plans, doing their best to maintain toxic levels of fear and stress. While they predicted millions (and later hundreds of thousands) of deaths, tens of millions of Americans lost their jobs and livelihoods, while being told – in a turn of phrase that seemed almost designed to encourage suicidal thoughts – that they were “non-essential.” Kept from their friends and families by the same policies that robbed them of their income, it’s no surprise that so many turned to self-destructive behaviors.
The US suicide rate has already been on the rise, soaring 40 percent since 1999 among people of working age. But that rise has been especially pronounced in areas where the “social fabric” has unraveled, leaving people mired in a toxic psychological brew of poverty, unemployment and alienation. Sound familiar? Meanwhile, a January report from the CDC notes that workers in industries like mining, construction, agriculture, arts, and entertainment were among the worst-affected by suicide plague. Workers in these industries were largely sent home once Covid-19 showed up.
Prolonged isolation is profoundly unhealthy in and of itself. A study published on Thursday found isolation increases all-cause mortality by 50 percent, with an additional cardiovascular risk caused by lack of financial support – and that’s saying nothing of the mental health risk, which has long been known to scientists. Many countries have banned solitary confinement as too cruel and inhumane even for their worst prisoners. Interviewing inmates in solitary confinement at Pelican Bay Prison in 2018, Dr Craig Haney found they were 50 percent more likely to suffer from chronic depression than maximum-security prisoners. Suicides among solitary inmates in Texas are five times as common as in general population. Imposing the civilian equivalent of such a mentally and physically destructive punishment on an entire country as a protective measure is like setting one’s house on fire to protect it from termites.
ALSO ON RT.COMAnti-social distancing: The darker side of a remote world, from execution orders to digital governance

For the architects of the US’ lockdown policy to ignore their own data showing the country was already up to its waist in a suicide epidemic killing 48,000 annually even before coronavirus and the accompanying shutdowns was negligent at best. For them to compound that suffering by discounting decades of solid scientific data warning of the dangers posed to mental and physical health by prolonged isolation is, quite frankly, criminal.

PROTECT & SERVE: Aerial footage shows NYPD officers scaling the Brooklyn Bridge before successfully rescuing a despondent man threatening to jump, with the bridge closed in both directions as a line of police spoke to him. https://7ny.tv/2WUvhZV 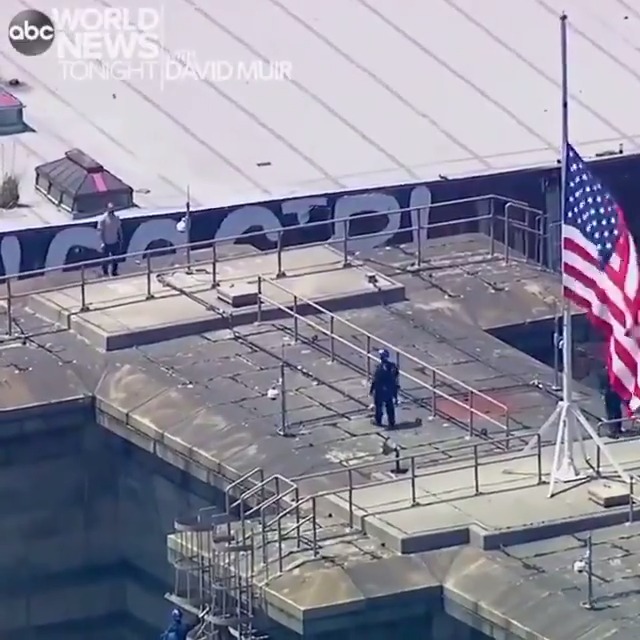 
183 people are talking about this
Social media cheered on Friday when, after a tense hour or two, New York City police rescued a man who’d climbed to the top of the Brooklyn Bridge with the intention of jumping off. They may have saved his life that day, but his problems haven’t gone anywhere, and the city remains under lockdown with no end in sight. More importantly, there are millions more where he came from.
NTS Notes:  I look at this report from Russia Today, and rather than despair I am FUCKING ANGRY!!!

Now, once again Greencrow (www.greencrowasthecrowflies.blogspot.com) has tackled this horrific issue with a great article of her own... I have the link to her report on this abomination right here:

OK, Readers, Is it not time to do something about this??? No more sitting in isolation and waiting for the fuckers in charge to "lift" the bullshit lockdowns and "'restrictions"... This fraud pandemic has turned deadly by killing innocent people through their incessant 24/7 propaganda via the Jew spew media!

And Greencrow is so right that even up here in Canada, the fuckers in charge have allowed this to happen!   And I would bet anything that they ALL knew full well that this would be a deadly consequence to their criminal actions!

As far as I am concerned, EVERY SINGLE Suicide that we find out happened due to this fraud pandemic has to have criminal charges laid against our governments and the liars in the Jew spew media for allowing them to happen thanks to their fraud 'pandemic'.... They are all responsible for this real crime and knew full well that this travesty would happen...

Greencrow mentions about the rising suicide rates in British Columbia, but those would be minuscule to what is happening in Ontario or even Quebec.... And right here in Manitoba, I will GUARANTEE that the number of suicides thanks to this fucking fraud scam-demic are multiple times larger than the "7 deaths from COVID-19" bullshit that the fuckers are reporting!

Again, I cannot emphasize enough here that this is the real tragedy and people are really dying here.... The scam must end, and people must get HELP to stop further suicides from happening.... The best way to end the rate of suicides is simple, and that is to END THIS PANDEMIC FRAUD IMMEDIATELY!


Posted by Northerntruthseeker at 5:30 PM

The kikes will be out with some bullshit shortly.
"No No No goyeem ,the Covid19 looks exactly like suicide"
Seriously I'm not joking , these fucks have already tossed an unknown number of suicides into the covid19
Tally. The real number of suicides is startling when you think of just how many have been deliberately hidden. Oh and the children that lose a parent? Parents that lose children? Beyond words.

Of course they knew. And they still know there's increasing pressure for more by the day.