Christchurch Mosque Shooting Massacre: Why I Am Looking At This One As Another False Flag

I am like everyone else... I woke up this morning to the horrific news that some 49 innocent people were murdered while attending Friday prayers at a mosque in Christchurch New Zealand..... I watched the Jew spew media just go absolutely insane this morning with reports about this latest "shooting" with their usual numbed skulls trying to pin the cause of this latest shooting on everything from "radical white terrorists" and other so called "right wing" groups, until later they zeroed in on this one being done by a "lone gunman nut job" who "supposedly" loved US President Donald Drumpf..... As the story line progressed and was changing, I could not help but to think that this was once again one of the criminal Elite Jewish pricks' patented "false flag" operation!   And my hunch that we are dealing with an operation who's goal was indeed to shock the people of New Zealand into accepting "gun control legislation" blindly was in motion here.....

First, I will state that this one was a real shooting, with real dead bodies.... I must point out the FACT that a "false flag" operation of this type does include from time to time real victims and real dead people..... I am NOT convinced in the bullshit that the Jew spew media is trying to sell right now that this one was done by a "lone gunman", for the initial reports stated that there were "multiple gunman" at that mosque shooting at the victims.... And of course the notion that ONE MAN could have done all of this in that mosque by himself within the time frame of this shooting borders on lunacy.....

Well, apparently a few other real truth seekers have also looked at this very closely, and they too have their own questions and thoughts on this latest shooting.... First, I do want to turn to my fellow Canadian, Greencrow, who of course hails from the wild unknowns of southern British Columbia.... She has been all over this latest false flag apparently and has a great new article covering some of the real facts behind this latest shooting.... Here in fact is her article, from her website at www. greencrowasthecrowflies.blogspot.ca, for everyone to see right here.... I do have some of my own comments on her material to follow:

Christchurch - Where is Joe Vialls when we need him? 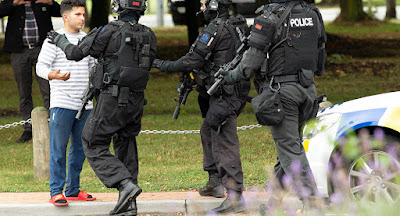 Another False Flag Friday on Planet Earth and I'm wondering... Where is the late, great Joe Vialls when we need him?  If Joe hadn't been killed years ago by a "fast acting fatal disease" (TM) he would be hard on solving the latest Christchurch, New Zealand mosque mass shooting atrocity case that occurred this morning.  HERE is a link to Joe's great investigation of the Port Arthur Massacre...an event which has some amazing similarities to the event in Christchurch today.

Joe was the one who first got me into Conspiracy Theory speculation.  He had his own blog way back in the days before blogging became commonplace.  He was a former policeman and honed his superb investigatory skills examining all the very first False Flags...back in the late 90's and early 2000's. Joe blogged from Australia and specialized in conspiracies that took place "Down Under". This was back when most of us accepted the various official stories we were fed.  But not Joe.  He was like a Pitbull when he got hold of a stinky story.  Stinky...like the way this most recent incident in Christchurch stinks.  Aanirfan said it first.

Hey, it's very early days to state definitively that it is a False Flag...BUT it has all the usual pungencies:

- It happened in one of the NATO/Five Eyes vassal states....funny how these incidents almost never happen elsewhere

- It started off with multiple shooters then ended up with only one arrest...of a "lone nut"(TM) young white guy

- New Zealand and Tasmania are "Plan B" spots selected by the 'usual suspects' who hate that one of the major cities is called "Christ"church.  Christchurch has been the victim of several previous unusual catastrophes--including a rare earthquake and a previous massacre in nearby Tasmania.

But, most significantly, today's "senseless" atrocity coincides with several newzstories that are putting governments and leaders of the globalist demonic Deep State in uncomfortable positions.  It is bound to provide a distraction from ongoing embarrassments like the Brexit fiasco in the UK, the election in Israel where Netanyahu is facing corruption charges...the latest Israeli attacks on Gaza, coinciding with the election...and the stalled/failing USregime change efforts in Venezuela, just to mention four. So, while distraction is an important motivator of the False Flag perps, the main purpose of False Flags/False Flag hoaxes is to maintain and ratchet up fear and terror in the targeted populations.

NOTE:  It is important to re-state that calling an event a "False Flag" DOES NOT mean that there was no violence and/or deaths.  There are False Flags...and then there are False Flag hoaxes.  The Christchurch event might well be a False Flag.  We know the Mossad is very active in that part of the world, including an alleged assassination attempt on the former Prime Minister of New Zealand.

Like I say...where is Joe Vialls when you need him? 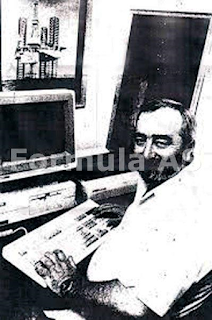 NTS Notes:  Greencrow brought forward the interesting fact about how Joe Vialls was one of the first reporters to rip apart the official reports on the Port Arthur "massacre" on the island of Tasmania over in Australia almost 2 decades ago, that resulted in the nation of Australia to impose their bullshit "gun control" legislation on the helpless Aussies and thus keeping the proud people of Australia without the ability to oppose their own decrepit government and their criminal actions....  And I too have long wondered about the death of Joe Vialls, for apparently the authorities absolutely wanted to shut him up permanently and end his investigation into that supposed "massacre" that more and more through real research has been exposed as a false flag operation.

And again, a lot of the 'facts' that we are being inundated by the Jew spew media just do not add up... I again am NOT sold on this "lone gunman" ploy, for we have seen before where these "lone gunman" reports have always been proven false and that more than one shooter was always involved...

And of course this latest shooting has indeed happened on a Friday, which seems to be more and more the day of the week as the first choice for these operations, as Greencrow does correctly point out it leaves people with the thought about this "shooting" in their heads over the weekend..... Propaganda and brainwashing exercise at its best....

The one thing that I will NOT promote here is the "video" that was supposedly released by this supposed "lone gunman" as he proceeded with his shooting of innocent victims at that mosque.... I do wonder if that video was intentionally put out there to mesmerize the world with the usual criminal shock and awe routine as part of their brainwashing scheme....

I was also wondering where the New Zealand government in Wellington would go with this operation?  For this has all the earmarks of a planned operation to incite the people of New Zealand to blindly accept "gun control legislation" much like their neighbours in Australia so blindly did over a decade ago... And sure enough we have this report here where the Kiwi government will indeed use this shooting to push gun control down the throats of the good people of New Zealand!  Here is the link to that report here:

Yes, now the New Zealand government in Wellington will use this shooting to their advantage to ram gun control legislation down the throats of the people of New Zealand.... This alone should have a lot of people wondering about this entire "shooting" and whether it was indeed an operation to bring in "laws" in New Zealand to strip its citizens of their last line of defence against the criminality of their government.... This is why this entire shooting now "stinks to high heaven" and there is more going on here than what we have been told so far...

I will state it right here that I am not looking at this in any way shape or form to dishonour the victims of this atrocity..... But everyone needs the truth, and what we are being told is far from that!

Posted by Northerntruthseeker at 7:39 PM

Thanks for the link. The first link in my post, embedded in the words "False Flag Friday" is one to Seemorerocks blog run by Robin Westenra. He has viewed the videos involved and shows some stills. Amazingly, there is NO blood in all but one of the photos. And that blood is weirdly placed. Since seeing those photos of piles of apparently dead "shot" bodies, and absolutely NO blood...I am more convinced than I was earlier that this is a False Flag for sure...and perhaps even a False Flag hoax. Although, how they could pull that one off I have no idea. Oh, and I listened to a few witnesses on TV and they struck me as actors.

Thank you and Greencrow for your healthy skepticism. Do keep us informed on this.