Why Is This Not Theft? US Army Transfering 50 Tons Of Gold From US Run ISIS-Daesh Held Areas In Syria And Iraq Back To The US, Reports

In my last report about the so called "surrender" of the US fraud ISIS forces in that "pocket of resistance" along the Euphrates River south of the key city of Deir ez-Zor, I commented on the fact that these fraud "terrorists" held a large quantity of Gold Bullion that was rightfully the property of both the Syrian nation and neighboring Iraq as well.... That Gold was indeed stolen from the Syrian and Iraqi governments and rightfully those governments had every right to demand that once that Gold was seized by the US 'conquering forces' and their SDF allies, that it should be returned to the people of both Syria and Iraq.....

Well, just like what we saw when the criminal forces of the US and NATO went marching into Libya back in 2011 and basically stole Libya's Gold reserves, history apparently is repeating itself once again...For according to the following article from the Global Research website, at www.globalresearch.ca, the US Army is "transferring" (stealing) some 50 tons of Gold that was seized by their fraud "ISIS" and "Daesh" forces in both Syria and Iraq and is whisking it away to the US itself.... Here is that report for all to see for themselves and i do have my own thoughts and comments to follow:

US Army Transferring 50 Tons of Gold from ISIS-Daesh Held Areas in Syria and Iraq back to the US. Reports 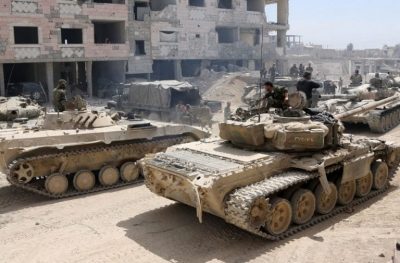 The U.S. Army is transferring tons of gold from Daesh-held areas in Syria to the U.S., multiple reports said.
According to a source who spoke to Kurdish Bas News Agency, the U.S. forces transferred about 50 tons of gold from areas seized from Daesh terrorists in eastern Syria’s Deir el-Zour region and gave a portion of the remaining gold to the PKK’s Syrian offshoot People’s Protection Units (YPG).
The gold was reportedly transported from the U.S. military base in Kobani.
Meanwhile, 40 tons of gold bullions stolen by Daesh terrorists from Iraq’s Mosul province was also taken by the U.S. forces.
Local sources who spoke to regime-run SANA news agency claimed that the troops relocated large boxes containing Daesh’s gold treasure from al-Dashisheh region in southern Hasakah.
Daesh terrorist leaders nabbed by U.S. troops reportedly provided information on the whereabouts of the gold, the report said.
The claim coincides with a report by the U.K.-based Syrian Observatory of Human Rights, which said that the U.S.-backed YPG was after 40 tons of gold left behind by Daesh terrorists in Deir el-Zour.

“The U.S.-led coalition forces and the Syrian Democratic Forces (SDF) deliberately do not target the areas under the control of the ISIL terrorists and commanders in Eastern Euphrates in Deir el-Zour as they are trying to locate this treasure by forcing the ISIL militants to speak about its location after surrendering,” the SOHR said, referring to Daesh using another acronym.

Though Daesh lost many strongholds in Iraq and Syria, a controversial deal between Daesh militants and Syrian groups linked to the PKK, a major terrorist group that carries out attacks in Turkey, helped their safe evacuation from Raqqa, Syria.
The U.S. still has about 2,000 troops in Syria, many of whom are working in close cooperation with SDF.
Almost all the territory in the east of the Euphrates River comprising some one-third of the territory of Syria, except for the Assad regime-controlled area near Deir el-Zour and the Daesh-held area near the Iraqi border, is controlled by the SDF. The SDF also controls the districts of Manbij and Tabqah on the right bank of the river.
*
Note to readers: please click the share buttons below. Forward this article to your email lists. Crosspost on your blog site, internet forums. etc.
Featured image is from Liberty Nation


NTS Notes: I love the terminology that is used here... "Transferring"... Yeah, lets go with that one... Sounds a lot better than calling it exactly what it really is which is THEFT!!!

Yes, this seems to always be the first order of business when it comes to these bastards and their "conquering forces".... Take the Gold out first and foremost and NEVER return it to its rightful owners....

And why am I not surprised?  We not only have the case in Libya where the criminals in both NATO and the US steal Libya's Gold wealth, never to return it to the Libyan people... But we also have the case in Ukraine where Ukraine's Gold reserves were loaded into several US Cargo aircraft in the middle of the night shortly after the US puppet regime seized power in Kiev, and that Gold was whisked away back to the US never to be returned to Ukraine itself.... And some time after that regime change in Ukraine, the new government had the gall to "launch an investigation" as demanded by the Ukrainian people, into where their Gold went  when they knew all along that it was in the greedy hands of the US!  And they had the unmitigated gall to announce to the Ukrainian people that they do not know where their Gold is!!!!

Yes, this is THEFT, as that Gold does indeed belong to the people of both Syria and Iraq..... This again shows how criminal the US is and always has been when they invade other nations and push for "regime change"... Their first order of business seems to always go after that nation's Gold!

To my American readers:  Does this not make you a bit angry?  You should be, for your government is indeed nothing more than a bunch of thieves...

NTS
Posted by Northerntruthseeker at 7:42 AM

then you have the UK refusing to return Venezuela's gold
also theft and in collusion with the US..

North:
I responded to your comment at my place and wanted to share it here
You and I have a bit of a different idea of the 9/11 perps
though the false flag is obvious IMO

Including Mossad. And the ISI which is interbred with CIA/Mossad.

Clearly there was/had to have been cooperation within the American agencies...

Without that cooperation Mossad alone could not have engaged in a such spectacularly successful attacks.