Genoa Italy Bridge Collapse: Shocking Report States That Experts Were Well Aware Of Problems Years Ago, But Failed To Act Due To Outrageous Maintenance Costs!

Many who have read this blog for years know full well that I have had major concerns about our "infrastructure" right across North America and especially in the United States... There is right now literally tens of thousands of bridges and other major infrastructures that are in dire need of repair, and the vast majority have now fallen into neglect... Every single on of these are basically ticking time bombs and could possibly fail sometime in the near future causing serious casualties and loss of human life....

Now here we go with that major artery bridge collapse in Genoa, Italy where the Morandi Bridge linking two major Italian motorways collapsed yesterday during a peak traffic period, causing the destruction of the bridge itself and the deaths of some 39 people so far..... It has been a major tragedy for Italy, and at the moment the Italian government has called for a major investigation of this disaster....

Yes, there will be a LOT of finger pointing for this disaster.... And what I found today, thanks to Web News System website, at www.webnewsys.com, shows that some of the people responsible for the proper maintenance of that bridge were well aware for years now that it was in dire need of repair or replacement!  This report shows that this bridge was indeed a "ticking time bomb" and the disaster that we just witnessed the other day was definitely going to occur sooner or later.... Here is that report for all to see for themselves, and I do have my own thoughts and comments to follow:


Revealed: Experts warned two years ago that 50-year-old 'uneven' Genoa bridge should be demolished because no one would pay for its 'exorbitant' maintenance - as Transport Minister says those responsible for 35 deaths 'will have to pay'

The motorway bridge which collapsed in Genoa, Italy, killing at least 35 people had been the subject of a series of 'exorbitant' maintenance works and had been causing issues for decades, it has emerged.
Engineering experts had warned that it would have been more cost effective to knock the bridge down than to continue to repair the 'uneven' construction.
The Morandi Bridge, built in 1967, was a main thoroughfare connecting the A10 and A7 highways and had therefore been heavily trafficked for more than 50 years.
Tuesday morning was no different, and dozens of cars fell several hundred feet when a 260ft section of the concrete bridge collapsed shortly after 11.30am. 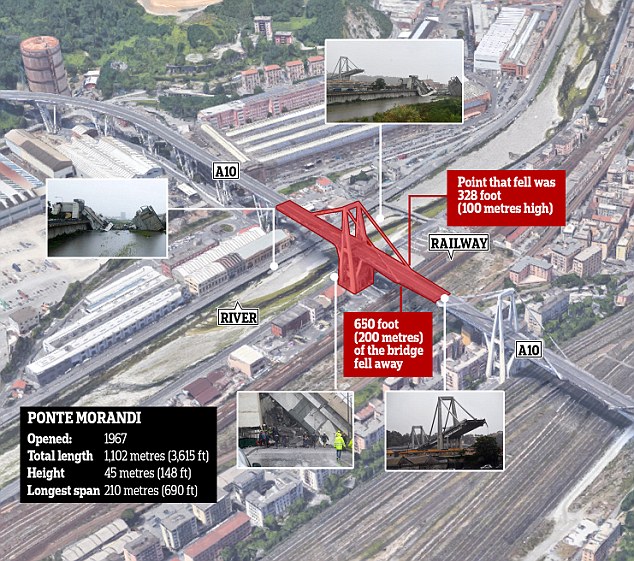 Tragedy: This graphic shows the part of the Morandi Bridge in Genoa which collapsed on Tuesday morning, killing at least 35 people
Transport and Infrastructure minister Danilo Toninelli called the incident 'an enormous tragedy', vowing that those responsible for the collapse would 'pay up'.
'The first information would seem to say that the maintenance had been carried out, but it can not be so. These tragedies can not happen in a civilized country like Italy.'
Despite its majestic design, the structure of the Morandi Bridge, using two types of reinforced concrete, had caused issues over the decades and required expensive maintenance.
In the early 1990s, the suspension cables along the bridge had to be replaced, and further restructuring work was carried out in 2016.
In 2016, Antonio Brencich, associate professor of civil engineering at the University of Genoa warned that the Morandi Bridge's maintenance costs 'are so exorbitant that it would be cheaper to build a new one'. 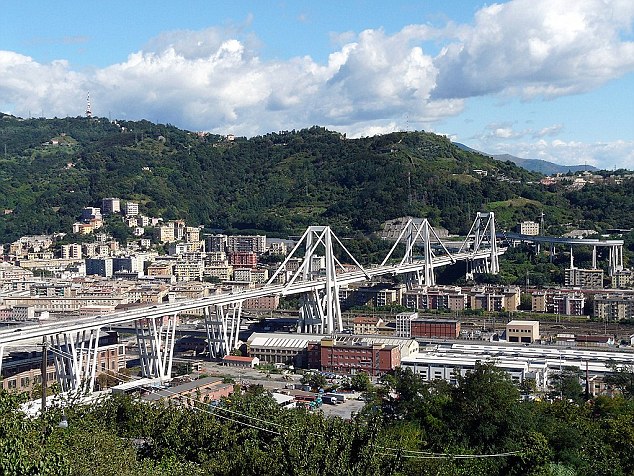 Before: The 3,615ft long Morandi Bridge, completed in 1967, had needed several rounds of maintenance work over the past decades 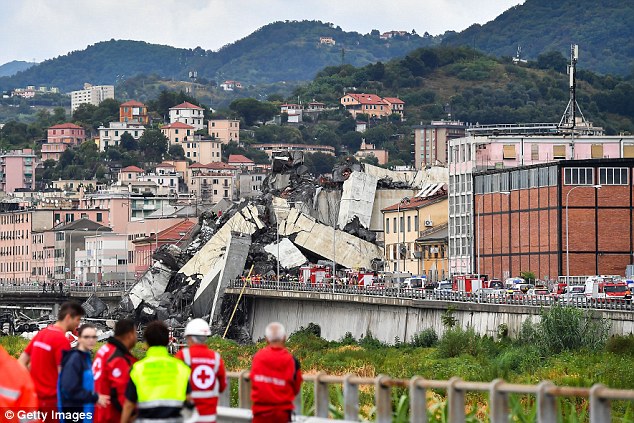 Shocking: The bridge collapsed on Tuesday morning as Transport Minister Danilo Toninelli vowing those responsible would 'pay up' 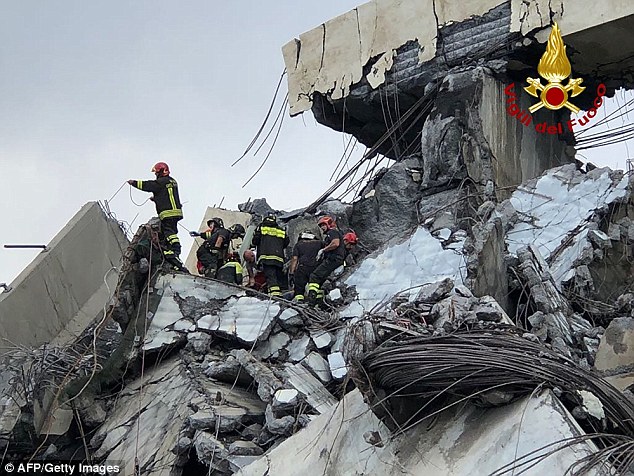 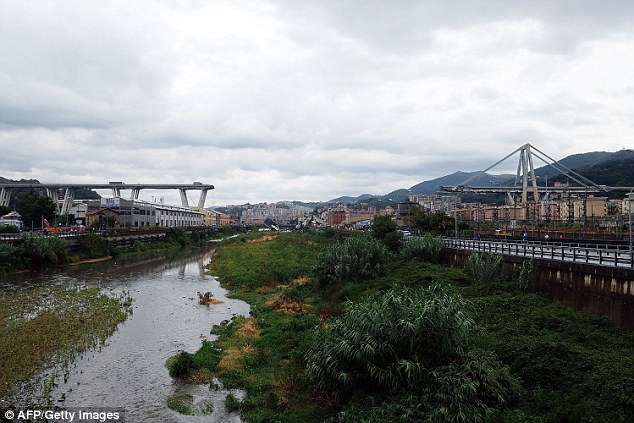 The collapse came two years after a professor of civil engineering warned that the Morandi Bridge's maintenance costs 'are so exorbitant that it would be cheaper to build a new one'
In the article, quoted by Il Tempo, Professor Brencich says issues with the bridge being uneven and 'semi-horizontal' had plagued the construction since the early 1980s.
In December 2016, Genoan newspaper Il Secolo XIX claimed maintenance of bridges in the area had been lacking funds because authorities 'preferred to allocate more funds to new works'.
The paper accused officials in the Liguria region of only making important restorations when issues with bridges had become obvious.
Ian Firth, a former president of The Institution of Structural Engineers said the Morandi Bridge's 'very unusual' design creates a 'stiff arrangement' between the supports which is not common in cable-stayed bridges.
Mr Firth added: 'It is too early to say what caused the tragic collapse, but as this reinforced and prestressed concrete bridge has been there for 50 years it is possible that corrosion of tendons or reinforcement may be a contributory factor.
'There are no obvious signs to say what specifically triggered the collapse at this time; the fact that there was reported to be a storm at the time may or may not be particularly relevant.'
The highway operator said today that work to shore up the foundation of the Morandi Bridge was being carried out at the time of the collapse, adding that the bridge was constantly monitored.
Tuesday's incident is the latest in a string of bridge collapses in Italy, a country prone to damage from seismic activity but where infrastructure generally is showing the effects of economic stagnation. 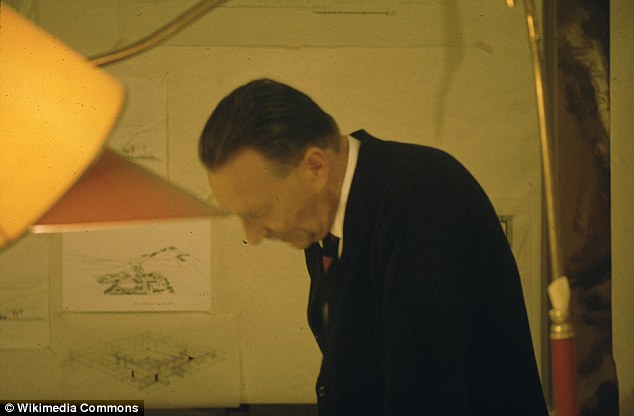 Designer: The Morandi Bridge was named after its designer, Italian engineer Riccardo Morandi 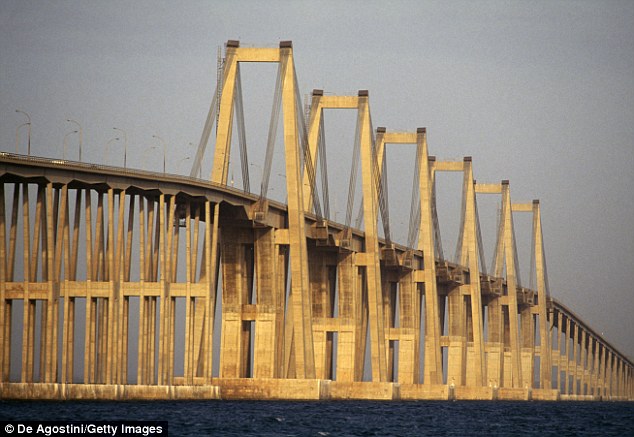 Same same, but different: The Morandi Bridge's sister bridge, the General Rafael Urdaneta Bridge in Venezuela, which partially collapsed in 1964
The Morandi Bridge, also known as the Polcevera viaduct, was named after the engineer who designed it - Riccardo Morandi.
Morandi, who died in 1989, specialised in working with reinforced and pre-stressed concrete to design a series of bridges in Italy, South America and Libya.
The bridge which carried his name took four years to complete and was opened to the public in 1967, with the then-President Giuseppe Saragat presiding over the inauguration ceremony.
The bridge over the Polcevera stream was 3,615ft long, 148ft high and its longest span stretched 690ft.
Another Morandi bridge in Venezuela, built to a similar design to the one in Genoa, partially collapsed in 1964 after being hit by an oil tanker, just two years after it finished.
The General Rafael Urdaneta Bridge, also known as the Lake Maracaibo Bridge, had been completed just two years earlier when a tanker steered into it - killing seven people.
The collapsed part of thee bridge was rebuilt eight months later and no major issues have been reported since. The CNR civil engineering society called for a 'Marshall Plan' to repair or replace tens of thousands of bridges in Italy that have surpassed their lifespans, having been built in the 1950s and 1960s with reinforced concrete.
The group said the bridges were built with the best-known technology of the time, but that their working lifespan is 50 years.
It added that in many cases, the cost to update and reinforce the bridges is more than it would cost to destroy and rebuild them.
The CNR called for a major program to replace most of the bridges with new ones that would have a lifespan of 100 years.
It cited previous collapses, including one in April 2017 in the northern province of Cuneo that crushed a carabinieri police car.
Fortunately, the officers and the driver they had pulled over in a traffic stop heard the creaking noise and got out of the way in time.
Another was an overpass in the northern city of Lecco that collapsed under exceptional weight, crushing a car and killing the driver.
Posted by free heip at 12:01


NTS Notes: WHY am I not in the least bit shocked by this report?  The facts are that this structure was absolutely in need of replacement due to the ridiculous maintenance costs that would have had to been paid just to keep it from falling... And basically because nobody wanted to foot the bill, it became a ticking time bomb and this collapse was definitely going to happen sooner or later..

Yes, this report also shows that many of the structures, and especially the bridges, right across Italy are in such dire state of disrepair that many are absolutely in need of replacement.. But who would foot the bill?  Italy has been in a state of near bankruptcy for the last decade with the criminal Jewish run IMF calling on the government in Rome to restructure their "debt" or face the same debt monetary crisis that both Greece and Spain face right now..... The bottom line here is that there is NO money for basic infrastructure needs and we see the result of that folly with this bridge collapse in Genoa...

AND again what has happened in Italy should be a wake up call for both my American and Canadian readers... The US government has been throwing away taxpayer money for decades now in illegal wars for Israel while putting almost ZERO dollars in for much needed infrastructure repairs or upkeeping... We see the results with so many bridges right across America as bad or WORSE than the one in Genoa.   It will only be a matter of time before we see the bridge collapse in Italy repeated right here in North America..

One update:  I got an email from a colleague that has read this article and he sent me the following picture that he said is also up at Jim Stone's website at www.jimstone.is... IF this is the picture of that elevated bridge structure of the part of this bridge that collapsed, then anyone with any common sense can see how it would have indeed collapsed... Here is that picture:

I am trying to verify if this is a picture of the underside of that bridge, and if so then we can see how the disintegration of the structure, due to age and neglect,  most definitely led to the collapse...
Posted by Northerntruthseeker at 11:14 AM