Yes, Baby it is indeed cold outside.... Up here in central Canada we have been "spared" the intense storms that are presently battering the American and Canadian east coasts.... These intensive storms have dumped snow as far south as northern Florida as well as many states along the American Gulf of Mexico coast... And even though the massive storm and dump of snow has now ended in those southern states, the storm has pulled in a massive cold front behind it and I have seen reports today that near record COLD temperatures are happening in many southern American cities that have people ill prepared..... AND considering that this is only the beginning of January, the worse may be yet to come..

I want people to understand that being "spared" does not mean we are somehow in better shape up here in the Canadian frozen tundra... Because up here the temperatures are still hovering around the -30C (Sigh, thats -22F for you American readers..) with wind chill factors hovering around the -40C (-40F) mark every night... There appears to be a slight "recovery" coming over the next few days where temperatures will rise to around the -5C (23F) mark for at least Sunday, before PLUNGING back to lower than the -20C mark by Wednesday...  Yes, it is indeed intensely cold here in the "Great White North" so again do not think for a moment that anyone here has been "spared" of what is happening down south... Not by a long shot...

I noticed something over the last while with all of this intense cold... Many of well over a HUNDRED articles that I have posted here about the sham of "Global Warming" are now being actually read by many readers for the first time!   I honestly have to say "What in the hell kept you all so long?  I did not put those articles up on a whim for I can see the truth." .... It is so nice to see people finally waking the fuck up to the reality that "Global Warming" is indeed a massive fraud and a swindle... And for now, I want to add at least one more article to that vast wealth of information here...

I came across the following report, that comes from a Dr. Sircus out of the US, who writes a most interesting blog at www.drsircus.com.... His newest report takes a shot at the "Global Warming" fraud, and is entitled: "Begging For Global Warming As Global Cooling Becomes Obvious"... I have it right here for all to see for themselves, and of course I have my own thoughts and comments to follow: 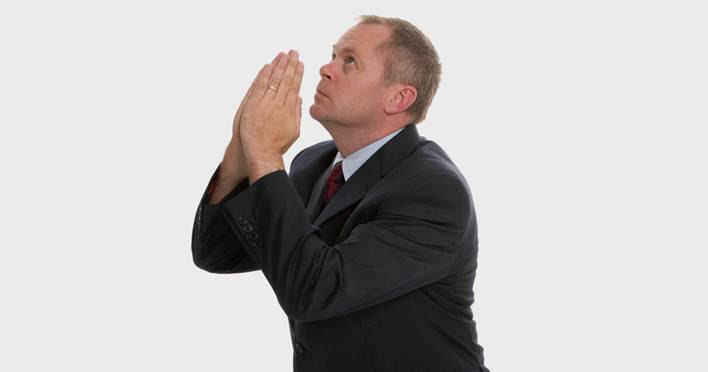 As each day passes the evidence climbs, as predicted by scientists (not politicians and Popes), that a steep drop of temperatures would ensue—first dropping temperatures to where they were in the very cold late 1800s and then going down from there to ice age conditions that will threaten a great part of the northern latitudes over the next 10 years.

We are not ready for any of this mentally or in any other way thanks to people like former president Obama, the Pope, and let’s never forget Al Gore. Some of the most unscrupulous people have been championing the cause of manmade global warming even though the science and actual conditions on the ground have been showing for ten years that there is no such thing as manmade warming.

It has been a big snow job, pure propaganda and now the gig is up as it starts snowing in Florida of all places. Now we have temperatures crashing, almost the entire continental United States frozen over, snow accumulating in record amounts and ice forming in the great lakes at breathtaking speed. It is not just record breaking cold but record breaking snow fall that is showing us just how difficult global cooling will be compared to global warming.

Winter is here but it’s not a regular winter as just about every American can feel if they step outside. Boston tied a 100-year-old record on Tuesday when it marked seven consecutive days of temperatures that did not top 20 degrees Fahrenheit (-6.7 degrees Celsius). New York’s airports have registered new lows and Chicago has enjoyed its coldest New Year’s Day ever.

In Nebraska, temperatures hit 15 below zero (-26 Celsius) before midnight Sunday in Omaha, breaking a record low dating to 1884, which is 134 years ago. The temperature in Indianapolis dropped to -12°F (-24C) on the 2nd, tying the previous record for the date set in 1887.

Forecasters warned people to be wary of hypothermia and frostbite from the arctic blast that’s gripping a large swath from the Midwest to the Northeast, where the temperature, without the wind chill factored in, dipped to minus 32 (minus 35 Celsius) Thursday morning in Watertown, New York. Temperatures rose to minus 7 (minus 22 Celsius) early Friday morning before the really cold air moved in for New Years. Officials are urging people to assist the homeless and elderly.

On the second of January the National Weather Service issued winter storm watches and warnings all the way from northern Florida to northern Maine, a distance of about 1,500 miles. By Friday morning, the fifth of January, wind chills could drop as low as minus 30F (-34.4C) from the Midwest to the Northeast. “This is about as intense cold as I can remember,” said Judah Cohen, director of seasonal forecasting for Atmospheric and Environmental Research.

The Face of Global Warming 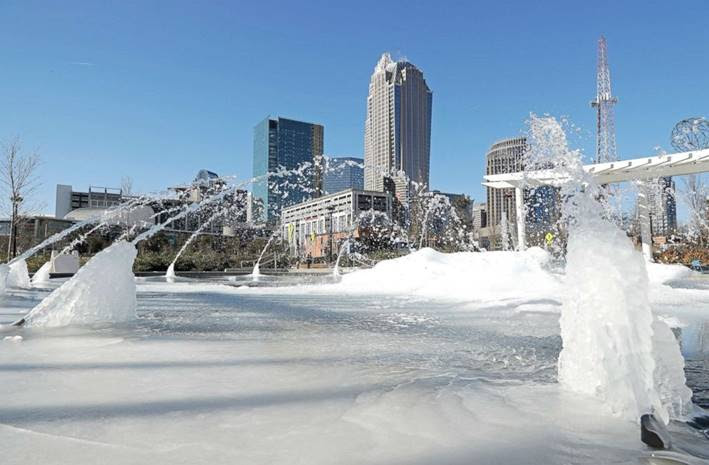 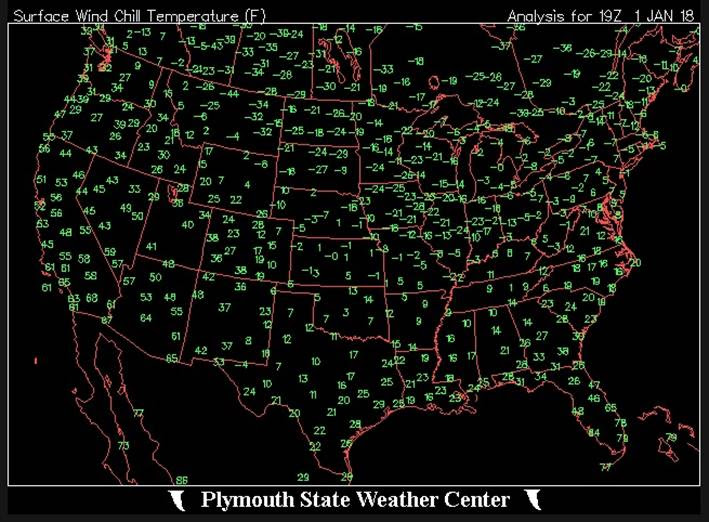 One wonders if Obama has one honest bone in his body. Let us see if he ever comes up with some truth about what is affecting hundreds of millions of Americans as the cold comes to stay. 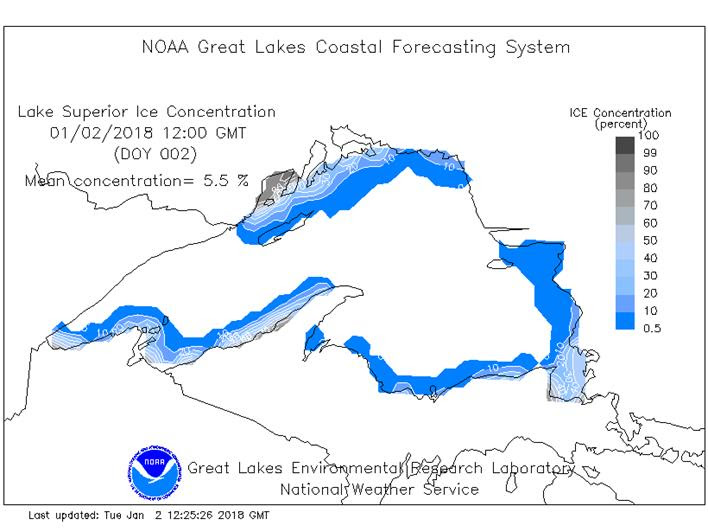 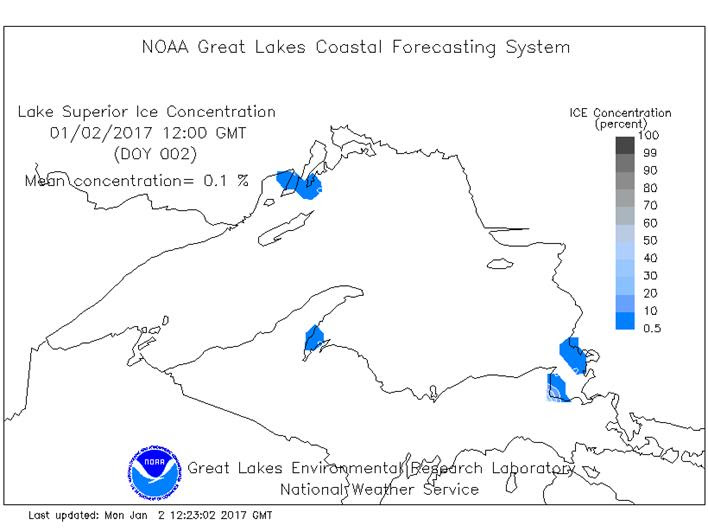 https://www.glerl.noaa.gov//res/glcfs/compare_years/compare_years_s.html
The decline in the energy output of the sun is extremely rapid at this point.  Satellite and NASA datasets show that rapid cooling is underway. The cooling we are seeing in the troposphere really is spectacular. What we are experiencing is the second largest cooling in 37+ years of satellite records.

This is not new news. We have had plenty of warnings through the last 10 years, which politicians have deliberately ignored. Scientists warn that the Earth is just 15 years away from experiencing a “mini ice age” — something that has not happened in 300 years. Solar scientists say that the latest model shows the Sun’s magnetic waves will become offset in Cycle 25, which peaks in 2022. Then, in Cycle 26, solar activity will fall by 60 per cent.

Special Note: If you still believe in manmade global warming understand you are suffering from a deliberately implanted mental disease. Like many mental disorders reality is left behind for something else, delusions, paranoia, aggressiveness and even violence. We have read in the last few years how global warming fanatics want to prosecute what they call climate change deniers. Also, global warming champions never talk about the sun. They are also incapable of doing any research that challenges their beliefs.


NTS Notes:  It is so nice to see other people take shots at that fraud, "Manbearpig" Al Gore and his criminal cohorts... These fools should all be in jail for the massive con job they are perpetrating on the entire world through this "Global Warming" scam...

BUT... I will make one thing perfectly clear.. The planet is NOT entering a full fledged "ice age" as many doom and bloomers are trying to perpetrate... What is happening is what I have been saying for years:  Sol, our Yellow Dwarf star "Sun" that drives our climate has gone quiet... It is going through one of its many cycles that has been going on for billions of years and its solar radiation output is down a bit... But that bit is considerable for even a minute drop in solar output can cause a drop of a few degrees celsius (C) on this planet... And yes, that is exactly what is happening right now to our good ol Earth..... But fear not, for this cycle is not going to lead to an "ice age" but instead will see planetary temperatures plummet for the next decade at least before Sol starts generating more energy output and we see a "warming trend" once again....

I am also really hoping that this planetary cooling will finally open up the eyes and minds of my fellow Canadians to the scam of "carbon taxation" that the criminal Justin Trudeau (Le Dauphin as Greencrow likes to call him!) is trying to ram through and basically fleece the gullible Canadian public out of their earnings... That money is NOT for any kind of "Global Warming" initiative but instead will just fill the coffers of the criminals in charge...And cost each Canadian hundreds if not thousands of dollars each year.... It is time for the Canadian knuckleheads out there to wake the fuck up and put that fraud taxation out of its misery...

I do feel so vindicated when I see more and more people wake up to the reality that this "Global Warming" is and always has been a sham and a massive lie.. Hopefully more people will finally get it and put clowns like "Manbearpig" Al Gore out of their misery..

NTS
Posted by Northerntruthseeker at 5:50 PM

Hey North: I'm going to be doing a post on this extreme cold later today- It's, scuse the language- f'n freezing here- And it's generally warmer where I live then where you live!- Was out at Lake Erie yesterday and it's frozen- as far as the eye can see- Ice. There are still ships frozen into the St Lawrence Seaway system- it's frikkin insane the length of this deep chill and the low, low temps-
I've got info on forecasts for ice growth etc- which NOAA got really, really wrong