Exposing Donald Drumpf: Criminal US President May Indeed Be JEWISH! (That Would Explain A Lot!)

Ever since that idiot Donald Drumpf showed his true colors last week with that nice little cruise missile attack on Syria based on nothing but lies and falsehoods about Assad "gassing" his own people, I have been like everyone else, both shocked and dismayed by that action.... I have long said that there is something truly sinister about this man and how we may have all been deceived about his entire run for the Presidency of the United States... And what I found and want to expose right here may provide the answers...

Right now, I want to present the following report from Jim Kirwan, through the Jeff Rense website, at www.rense.com, that shows some proof that Donald Drumpf has been LYING about his entire past... This article provides some amazing details that shows that this criminal may indeed be JEWISH and has been lying about that fact all his life!  Here is that article here for everyone to see for themselves, and I have my own thoughts and comments to follow:


Looks Like Donald Trump May Well Be Jewish
That Would Explain A Great Deal... 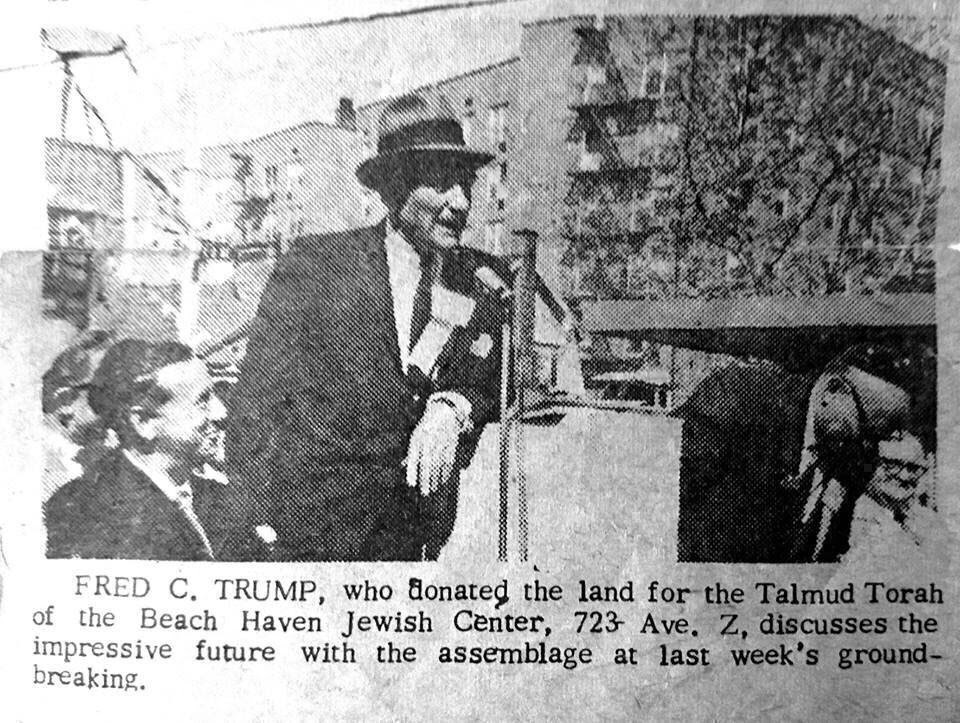 In his biography The Art of the Deal, Trump lied about his grandfather's country of origin, stating it was Sweden instead of Germany. So if you think these people wouldn't lie about their ancestry, you need to explain that whopper.

Trump was brought up in Jamaica Estates, Queens, which has a large Jewish population. He went to Kew-Forest School, ditto. Its other notable alumni include Katherine Weber, Jewish, Gideon Yago, Jewish, and Hank Azaria, Jewish. Googling on “attended Kew-Forest” brings up mostly Jewish names. Trump's father was on the Board of Trustees at Kew-Forest. By the way, it is very expensive.

His genealogy is a total mirage. I'll show you where to look. First go to his mother at Geni.com

She is Mary Anne MacLeod. So they want you to think she is Scots. Then click on her father, Malcolm MacLeod. Then click on his mother, Anne MacLeod. She is the wife of Alexander MacLeod, so that is her married name. What is her maiden name? Whoops, it is also MacLeod, because her father is also named Alexander MacLeod. So both her father and her husband have the same first and last names? Did she marry her own father? Also, her birthyear is given as 1833. Note the 33. [Geni also fails to mention what we have to learn from the DailyMail: the name Trump was originally Drumpf.]

That can't be right, can it? So let's check the other genealogies. The second listed on a Google search is at About.com

The largest source for Expert content on the Internet that helps users answer questions, solve problems, learn something new or find inspiration.

.But it has nothing to say about this. It stops just short of the Anne MacLeod problem.
But it does tell us something interesting: both Trump's parents died at Long Island Jewish Medical Center.
Wikitree matches Geni.

So let's return to Friedrich Drumpf, Donald's great-grandfather. Two of his sisters are listed as Elisabetha Freund and Syblia Schuster. Oi-vay! Those are both Jewish surnames. We just saw the name Schuster in my paper on Engels published two days ago. I reminded you there that Max Schuster, founder of Simon&Schuster, is now admitted to be Jewish. The Schuster in the Socialism project with Engels was also shown to be almost certainly Jewish. As for Freund, see Michael Freund, Moshe Aryeh Freund, Wilhelm Freund, Yoav Freund, Leopold Freund, and too many others to mention. So at least two of Trump's great-aunts married Jewish men. This reminds us that his daughter Ivanka married a Jewish man, Jared Kushner. We are told this is an anomaly, but it isn't. What is an anomaly is that Kushner admits he is Jewish.

Friedrich Drumpf's mother is named Katarina Kober. Not only is that possibly Jewish, but it lead to another suspicious scrubbing of the genealogy. Her father is given as Johann, but he has no parents. He is the only one in that generation whose parents are unknown. Even his wife's parents are known. I suggest the name isn't Kober, but Kolber. We have seen the genealogies being whitewashed this way again and again. Changing one letter is often the best way to do it. It is the most subtle, so it draws the least attention. Kolber is very often Jewish.

With more study, we find that Trump's aunt Elizabeth married William O. Walter. That name is also possibly Jewish. We find a William Walter as Director of Jewish Family Services in York, PA. Also a William Walter just buried at Jewish Memorial Chapel of Long Island. Also a William O. Walter marrying a Cora Neuhauser in Lebanon, PA, in 1924. That name is also probably Jewish. And most curiously, a William Walter, Esq. listed in the Jewish Missionary Intelligence of June, 1896. More research discovers his firm were the honorary stockbrokers of this London Jewish society in 1900. That is interesting because it directly ties to my previous paper on Friedrich Engels and Robert Owen. Owen's brother in-law was James Haldane Stewart, who worked for the Jews' Society in the 1830s and 40s, a precursor of this Jewish Missionary Intelligence. At any rate, this may be our William Walter or his father, given that date. His father is scrubbed at Geni. The names Walter and Walters were chosen by Jews entering the US, as a new name, as we see from Barbara Walters. Her father Louis Walters was original Louis Abrahams.

Mr. Lindenbaum cultivated a scholar’s knowledge of the Zoning Resolution, the arcane document that governs development in New York. As a result, he was able to bend the resolution to his clients’ will without breaking it. And because his clients were major builders and landowners — among them Harry B. Helmsley, Harry Macklowe, Larry A. Silverstein, Jerry I. Speyer, Leonard Litwin, Steven Roth and Donald J. Trump; the Fishers and Tisches and Rudins and Roses. . .

Notice anything about that list? Everyone on it “except” Trump is admitted to be Jewish. Curious, no?

Ivana is also Jewish. Geni.com lists her father's name as both Knavs and Zelnícek. I'll give you a hint: drop the second “e”. You get Zelnick. It is Yiddish for haberdasher. Clothier. It's Jewish, too. See Robert Zelnick, Strauss Zelnick, Bob Zelnick, etc. Robert was a fellow at the Hoover Institution, Stanford. Strauss was President of 20th Century Fox. Bob was ABC News producer. Also Friedrich Zelnik, silent film producer. Also David O. Selznick, whose name was originally Zeleznick, or, alternately, Zelnick. He and his father were major Hollywood producers.

NTS Notes: WHY am I not shocked by this article that exposes Donald Drumpf for what he really is?

And it all makes sense now... For we in the real truth movement know that there is something seriously psychologically wrong with the entire sick and twisted "chosen ones"... Most suffer from intense mental disorders and severe paranoia as a result... If Drumpf is indeed Jewish, then the mental disorders carried through genetically from that criminal tribe may indeed explain his outrageous and deadly actions we see now!

I have said clearly that this man has a very shady past, and I have stuck to my guns calling him by his true family name of "Drumpf" purposely to call into question his true identity... Now I can see that I was indeed right all along, and that there is indeed so much that Drumpf has been lying to everyone about his ancestry...

And we must not forget how most of his children and even his past wives (Not sure about Melania, yet...) and how they were all Jews... And that makes his children Jewish, and we all see how Ivanka married that psychopathic creature, Kirshner, as well.....  Yes, the tribe does indeed stick together!

NTS
Posted by Northerntruthseeker at 11:05 AM

This makes perfect sense. I have come to wonder why they invested so much in Donald if he wasn't actually one of them. They always like to keep things in the family so to speak I have learned from my experience.

Kirwan didn't write or research that article.He lifted it 100% (except for the yada yada stuff at the end) from here http://mileswmathis.com/trump.pdf If you copy and paste the link to Rense you provided,you can see they are now crediting Miles authorship,after he complained I assume.

NTS, what you discovered here, if true, wouldn't surprise me. All three branches of our government either have a bunch of Jews in them or have Jewish advisers to those they put in powerful positions. In our highest court we have three confirmed and one possible part Jew (Sotomayer). We almost had another Jew, Merrick Garland, who was nominated to succeed Justice Antonin Scalia but somehow didn’t get put in. We have a bunch of Jews in Congress, both in the House and in the Senate.

All of our institutions have become thoroughly infiltrated and dominated by these wretched parasites. Just like they are doing in Europe, they are using blacks and Muslims as their proxy armies to destroy our white civilization. There is an epidemic of black on white crime throughout the United States that is being covered up by our government and the media (check out some of Colin Flaherty’s video on this). I see absolutely no light at the end of the tunnel, except maybe for muzzle flash. My experiences with trying to wake up my fellow Americans to what is going on have been met with about the same success rate as your efforts to wake up your fellow Canadians. But we both know that we have no choice but to keep on trying.

I did hear a Jew say that Trump is actually Jewish. The name Drumpf is according to him a Jewish name and his ancestors changed the family name in order to hide their Jewish identities. So there are at least a few of them who are admitting openly to Donald being one of them.

We all know that Jews are in control, how do you propose to wrest power from them ? How will you manage to root them all out?
The Inquisition which the Church established to root out crypt-Jews from destroying the Church from inside no longer seems such a bad idea even though it was ultimately unsuccessful as the past sixty years have shown.