Exposing The Criminality Of Donald Drumpf: US Drone Strikes Have Gone Up 432% Since Donald Took Office! Why Am I NOT Shocked?

OK, I have had enough of Donald Drumpf and his entire administration... This criminal came into the White House saying that he was not only wanting to "Make America Great Again", BUT that he would de-escalate the terrible wars that his predecessor, Barry Soetoro, had created in the last administration... Americans were led to believe that with Drumpf, the American government would no longer be slaughtering people across the world and would instead be concentrating on actually fixing the problems at home... And boy, were they ever wrong....

Well, the truth does hurt, especially for those who falsely pinned their hopes on this man, for according to this report from the Activist Post website, at www.activistpost.com, apparently US drone strikes in foreign nations have actually increased a whopping 432% since "The Donald" took power in Washington... First, here is that important article for everyone to see here for themselves, and I do have my usual thoughts and comments to follow: 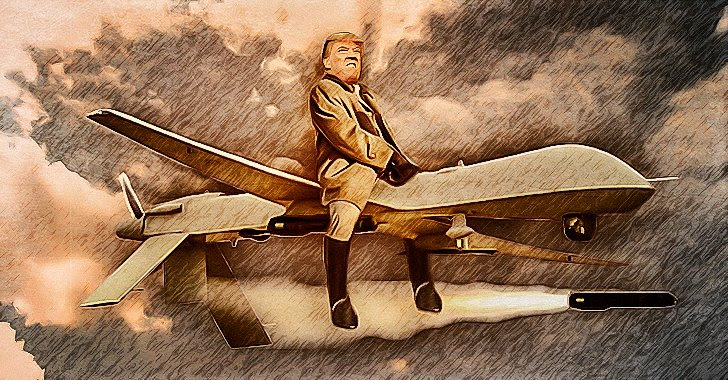 By Carey Wedler
When he was in office, former President Barack Obama earned the ire of anti-war activists for his expansion of Bush’s drone wars. The Nobel Peace Prize-winning head of state ordered ten times more drone strikes than the previous president, and estimates late in Obama’s presidency showed 49 out of 50 victims were civilians. In 2015, it was reported that up to 90% of drone casualties were not the intended targets.
Current President Donald Trump campaigned on a less interventionist foreign policy, claiming to be opposed to nation-building and misguided invasions. But less than two months into his presidency, Trump has expanded the drone strikes that plagued Obama’s “peaceful” presidency.
According to an analysis from Micah Zenko, an analyst with the Council on Foreign Relations, Trump has markedly increased U.S. drone strikes since taking office. Zenko, who reported earlier this year on the over 26,000 bombs Obama dropped in 2016, summarized the increase:

During President Obama’s two terms in office, he approved 542 such targeted strikes in 2,920 days—one every 5.4 days. From his inauguration through today, President Trump had approved at least 36 drone strikes or raids in 45 days—one every 1.25 days.

That’s an increase of 432 percent.
He highlights some of the attacks:

The raid in Yemen that cost Owens his life also killed 30 other people, including ‘many civilians,’ at least nine of whom were children. None of them were mentioned by Trump in last night’s speech, let alone honored with applause and the presence of grieving relatives. That’s because they were Yemenis, not Americans; therefore, their deaths, and lives, must be ignored (the only exception was some fleeting media mention of the 8-year-old daughter of Anwar al-Awlaki, but only because she was a U.S. citizen and because of the irony that Obama killed her 16-year-old American brother with a drone strike).


Greenwald notes this is typical of not just Trump, but the American war machine in general:

We fixate on the Americans killed, learning their names and life stories and the plight of their spouses and parents, but steadfastly ignore the innocent people the U.S. government kills, whose numbers are always far greater.

Though some Trump supporters sang his praises as a peace candidate before he took office, the president’s militarism was apparent on many occasions. He openly advocated increasing the size and scope of the military, a promise he is now moving to keep. And as Zenko highlights, Trump was disingenuous with his rhetoric against interventionism:


He claimed to have opposed the 2003 Iraq War when he actually backed it, and to have opposed the 2011 Libya intervention when he actually strongly endorsed it, including with U.S. ground troops. Yet, Trump and his loyalists consistently implied that he would be less supportive of costly and bloody foreign wars, especially when compared to President Obama, and by extension, former Secretary of State Hillary Clinton.

As Trump continues to dig his heels into decades-old policies he has criticized himself — reportedlymulling over sending ground troops into Syria — he is increasingly proving to be yet another establishment warmonger implementing policies that spawn the creation of more terrorists. As Zenko concludes:

We are now on our third post-9/11 administration pursuing many of the same policies that have failed to meaningfully reduce the number of jihadist extremist fighters, or their attractiveness among potential recruits or self-directed terrorists. The Global War on Terrorism remains broadly unquestioned within Washington, no matter who is in the White House.


NTS Notes: Honestly, I can just see my fellow truth seeker, Buelahman, now grinning ear to ear after reading this report.. For he was one person that kept on telling myself and others to NOT pin any hopes on this criminal for actually making things better and that even with the 'wait and see' period after his inauguration to hope that he would make the changes necessary to save America,  everyone would be deeply disappointed... And he was so right...

Yes, this should be an outrage for every person living in America... The American people were so appalled by the reports of Barry Soetoro's massive drone strikes all across the planet that killed and maimed thousands of innocent lives.... And now we see Drumpf make the situation much much worse by having those strikes increase some 432% or almost 4 and 1/2 times worse!

Well, there you have it, America.. How do you like your new President now?  He is just as bad as previous clowns in the White House, if not worse..... And so much for his promises to stop these wars overseas, for he is escalating them even further!

This is a reality check for all Americans... And once again, putting false hope in someone is not the answer to fixing America's woes.. The only way change will occur is to actually flush out every criminal that is in power in Washington including the President and actually force a real change... But again, fat chance of that, and the American people are stuck with this one for the next 4 years to come...


Posted by Northerntruthseeker at 7:46 PM

I'm not grinning. This happens every election cycle. It is sad.

It just goes to prove that the tainted "two party" system is totally corrupt. I've been saying it for years.

There will NEVER come a solution from any candidate within either of those two parties.

Therefore, my motto: Never an R or D Again!

Drumpf is a media genius, even when his verbal skills and off-the-cuff narrative is so lacking (quick attack stings on Twitter not included). He has parlayed this image with his probably truthful basis of Americana and Nationalism into an "awesome" ( as John Friend recently put it on Reyvolt's show) persona.

It is a desperate desire for change that make these naive people like Friend want so bad that they can now consider this lackadaisical choice for this position of importance as "awesome".

Awesome compared to what? Hillary? (That was obvious and purposeful)

When it became clear Trump was pulling off the charade, the media went wild. It was all we heard. Ppl consider this negative, when it was used to fuel the white discontent into the Savior worship.

Hell, some form of this is used every election cycle. It is so obvious it hurts.

The few bones that this administration will throw to the meat eating believers like Friend is enough for them to perpetuate their worship. Little, to nothing he can do will change their minds now.

I've seen this happen in every election since 1980, btw. But it's effect is much greater now.

Now we have the tainted alt media which has been hijacked by the same forces. Yet most people are still falling for the same old tricks that have worked for decades/centuries. They still believe a lying politician.

I though would probably be grinning myself...LOL.....

I fully agree with your statement here.... And it is so sad about how the American people will now suffer from this ass clown in the White House...