* I first want to thank everyone for their patience while I take care of my better half who has been suffering for the last 5 days from "Shingles"... I have had to take most of my time doing what is necessary to keep her comfortable while she recovers, and again it has taken priority and time away from my blogging and writing articles here... Thankfully she is now getting better....

A commentator sent me a most interesting link to an article that I definitely want to share with everyone here... Supposedly, according to the following report from the "Arutz Sheva" Israeli National News website, at www.israelnationalnews.com, it appears that the Nobel group that gives out "peace prizes" is actually considering giving this year's "Nobel Peace Prize" to none other than... and hold off on barfing just yet... to none other than that ultra criminal former Prime Minister of Canada, Stephen Harper!  First, here is that article here for all to read for yourselves... I have my own thoughts and comments to follow:

Canada's PM to be Nominated for Nobel Peace Prize 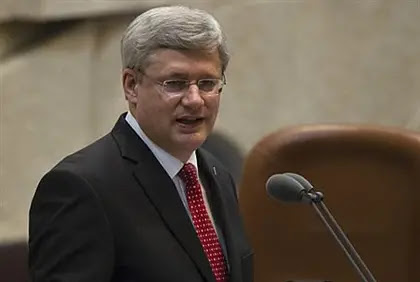 Canadian PM Harper in the Knesset

B’nai Brith Canada has announced that it will nominate Canada’s Prime Minister, Stephen Harper, for the Nobel Peace prize.

In a statement released on Friday, B’nai Brith CEO Frank Dimant said that “with recent developments across the globe posing new and difficult challenges, only one leader, Prime Minister Stephen Harper, has maintained the moral clarity needed to face them.”

“Moral clarity has been lost across much of the world, with terror, hatred and anti-Semitism filling the void,” he said.

“Throughout, there has been one leader which has demonstrated international leadership and a clear understanding of the differences between those who would seek to do evil, and their victims. More than any other individual, he has consistently spoken out with resolve regarding the safety of people under threat — such as opposing Russian aggression and annexation of Ukrainian territory — and has worked to ensure that other world leaders truly understand threat of Islamic terrorism facing us today.”

Dimant continued, “In accordance with the rules of the Nobel Foundation it gives me great pleasure to nominate in my capacity as Professor of Modern Israel Studies at Canada Christian College, Prime Minister Stephen Harper for the Nobel Peace Prize in honor of the outstanding moral leadership he has demonstrated.”

Harper has been a staunch supporter of Israel and continued to stand up for the Jewish state during the last conflict in Gaza.

The Canadian leader called on Canada’s allies and partners to recognize that Hamas’s terrorist acts “are unacceptable and that solidarity with Israel is the best way of stopping the conflict.” He also blamed Hamas for the heavy loss of civilian life in Gaza during the fighting.

In January, Harper visited Israel for the first time since becoming Prime Minister. During the visit, he gave a speech in the Knesset and also showcased his musical talent during a special dinner with Prime Minister Binyamin Netanyahu.

NTS Notes:  I had to go and definitely grab a barf bag when I started reading this horrific piece of garbage...

I for one cannot ever understand the Nobel commission and why they choose the most evil people possible for their "Peace Prize"?   Alfred Nobel must definitely be rolling over in his grave...

Lets face the facts... Canada under the former criminal PM, Harper, was a staunch supporter of the Apartheid and psychotic state of Israel and turned a blind eye to when the Israelis unleashed their army in their slaughter of Palestinians.. It was a clear statement to the entire world that Canada was nothing more than Israel's "poodle" when they refused to support any UN resolutions condemning Israel for their mass slaughter of Gaza civilians during Israel's attack on that open air prison camp called the Gaza Strip back in 2014....

Lets face the facts here.. Harper is absolutely not the right candidate for any "Peace Prize"... He is a criminal who supported slaughter of civilians and absolutely showed his love of Israel every chance he had... But we must all remember when the Nobel group selected that other ultra-criminal, Barry Soetoro (Barack Obama) for the same "Peace Prize" a few years back and he definitely has shown the world that he truly is a man of "peace"...

The bottom line is that this is only a "nomination" for the Nobel Peace Prize.... The real crime against humanity will be if Harper actually wins the award!

NTS
Posted by Northerntruthseeker at 9:16 AM

Hi NTS, greetings from S. Africa. Thanks for re-posting this. I'm still sick to my stomach at the thought of this anti-democratic, Bible-bashing fundamentalist, environmental-destructionist, scientifically inept cretin, getting anything, except a jail sentence, or being stripped of his Canadian citizenship and forcibly exiled to his beloved 'israel' (spit!). He could take Baird, Kenney and that band of thieves with him. Let the Likudniks have them all!

Just shows who is behind all the disgusting nominations of the past few years, including Obama the puppet warmonger. It seems that the Nobel prize is now given for warmongering...not peacemaking.

Hi NTS I put a comment on this post up....but it wasn't published by Blogger. What I said was that the Nobel Prize seems to be going to warmongers nowadays, not peacemakers.

This is equally as despicable as Obama getting a peace prize!


Northern I thought your friend might be interested in this article. I didn't realize that shingles can be affected by diet. I have the shingles virus in my body as well. I was in grade school when I had my outbreak. I had chickenpox when I was 3 or 4 years old.

Can you please report on the OBVIOUS false flag in Calgary, AB yesterday - Nov. 3/15, it was so, so obvious, "they came back to take out the cops" after a hit & run, yeah okay, kind of like the shoot out lie at the "OK Parliament", no kidding, they looked like they used the same producer and film crew, even a picture of the UNKNOWN runner in RED shoes (and if you know the true enemy, RED is their color or rather MARK, watch it all over TV, they use RED (commonly with gold) & BLUE in everything, especially news, big companies, car manufacturers with their satanic astrology symbols and names, back grounds in so many advertisements, logos, movie scenes, their products.

TV is owned by the cia-military complex and they are owned by the HUNS, that's right, the HUNNIC EMPIRE is the ROMAN empire, was also the german-TURK-OTTOMAN-AUSTRIAN empire today they hide behind the "jews" (hence one reason for WWII, other than the cover for the occupation of the US govn't), an 18th century created term to fool us of their true identity and that true identity is confusing but it is EGYPT(ancient)-etruscan-TURK-HUNS, the blue is the TURKS, both of which are ASIA, where The Creator said they would be and the red also symbolizes...are you ready...ESAU's bloodline!! I've researched and researched for 30 years.
I know what I am talking about and I know this was a false flag, they picture of the guy in the RED shoes was their mark, but they got close enough to snap a picture and I mean close, but they did nt catch him...BS, also who comes back to fight cops after a hit and run, then the picture of the first responders with the one shooter is almost identical to the picture they took of the fake parliament shooting when the first responders were with the guard, you can see they are posing and so fake.

They had the city center cornered off but very suspiciously, TO BLOCK US FROM SEEING THE LIE unfold, many shoots are needed you know. Remember the HUN queen from the UK on TV for her 70 years of reign, did you notice she sat BEHIND a big red box with gold crest in our faces, she was showing her mark, that's what they do...it was right in the camera and she was BEHIND IT,so obvious it was pathetic and the people are so blind to so much more than jsut this and the truth of what I have said, and to tell all would take the 30 years I've been researching, I'm actually getting tired of telling people, the truth falls on deaf ears and lazy uneducated people who won't dare devote time to look for the truth, their lives are so vain, so sad. Some of us desire truth like water, it's frustrating at times.