Time To End The Fraud Of Political Correctness: University Of Tennessee Tells Staff To Stop Using "He" Or "She", And Switch To "Xe", "Zir", And "Xyr" Instead! (This Is NOT A Joke!)

I for one have always been sick by this bullshit called "Political Correctness" ... Every day I see examples everywhere I go where people are being told that they should not say or do what they are usually long accustomed to doing, simply because it is not "politically correct"... To me, this is so outlandish and ridiculous and has done nothing other than to stifle free speech and free thought and has actually been a detriment to society as a whole!

I came across the following report today that shows "political correctness" gone wild and I want to share it here with my own readers.. For according to the following report from The Mail Online news service out of the United Kingdom, at www.dailymail.co.uk, it appears that the University of Tennessee, out of Knoxville Tennessee, has had the ridiculous gall to request (demand) that their own staff stop using the phrases "He" or "She" in their daily dealings with staff and students... Yes, this is real, and I have that article right here for everyone to read for themselves.. I have my usual thoughts and comments to follow:

University of Tennessee tells staff and students to stop using 'he' and 'she' - and switch to 'xe', 'zir' and 'xyr' instead

The Knoxville branch of the public university, which has 27,400 students, sent a memo round to its members filled with unusual new parts of speech to avoid referring to anybody's gender.

According to a gay rights official at the university, the new language regime will make the university 'welcoming and inclusive' and stop people feeling 'marginalized'. 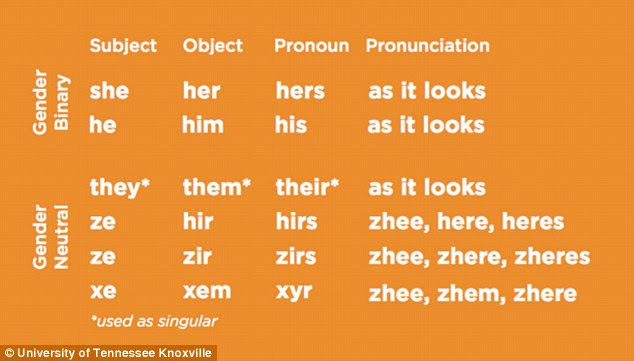 +2
New regime: Pictured above is a conversion table given to staff and students at the University of Tennessee's Knoville campus to instruct them in the use of non-gendered pronouncs

The university published the instructions on its website on Wednesday after they were emailed to every member of the university by the institution's Vice Chancellor for Diversity.

Officials have since insisted the the guidelines are not compulsory and that they do not want to 'dictate speech'.

Donna Braquet, who runs the university's Pride Center, wrote the guidelines, which are accompanied with a long table demonstrating how to replace the regular parts of speech.

She also advises staff members not to call roll in class, and to instead greet every student by asking them to announce their name and pronoun of preference.

Instead of 'he' and 'she', Braquet suggests four alternatives.

One is the commonplace strategy of using 'they', 'them' and 'their' for individuals rather than groups.

She also suggests 'ze' and 'xe' - both pronounced 'zhee' - and a variety of secondary conjugations to be used for anybody who rejects the traditional gender binary.

Barquet argues that if everybody follows her instructions, campus will become 'more inclusive'. 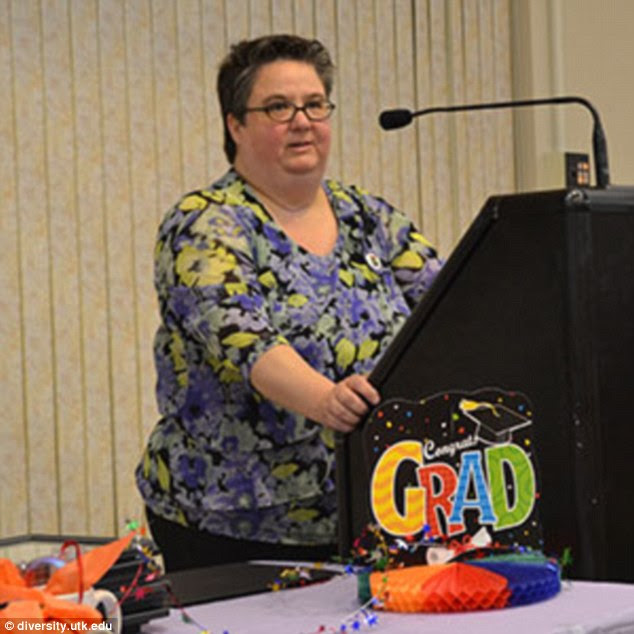 +2
Instructions: Donna Braquet, a gay rights official at the university, wrote the guidelines, which were sent to the entire university

She wrote: 'When our organizational culture shifts to where asking for chosen names and pronouns is the standard practice, it alleviates a heavy burden for persons already marginalized by their gender expression or identity.'

There is no information on the numbers of students on campus who do not identify as the traditional genders, as the university's official data only recognizes male and female.

In an interview with DailyMail.com, Rickey Hall, the university's vice chancellor for diversity, said he was 'ancedotally' aware of students on campus who reject traditional gender divisions.

After a backlash from critics who called the proposals 'ridiculous' and 'absurd', the university clarified that nobody would be forced into using the terms.

'If you must interview a student before you greet the student, that’s not acceptance – that’s just absurd.'

A statement from a university spokesman said: 'We would like to offer clarification of the statements that have been made referring to gender-neutral language.

'There is no mandate or official policy to use the language. The information provided in our Office of Diversity and Inclusion newsletter was offered as a resource to our campus community on inclusive practices.

'We recognize that most people prefer to use the pronouns he and she; we do not dictate speech.

'We do strive to be a diverse and inclusive campus and to ensure that everyone feels welcome, accepted, and respected.'
Read more:


NTS Notes:  OK, when in the hell will people with what ever is left of common sense put an end to this madness?

This is so ridiculous and beyond laughable... I cannot believe that the University of Tennessee has the utter gall to demand that their staff start using ridiculous words in place of common "he" and "she" in their daily dealings..

OK, Honestly what is wrong with "He" and "She" to start with?  There are two sexes, male and female,(unlike what the insane politically correct crowd likes to promote) and the different words to signify that difference have been used for thousands of years!   To suddenly demand that this University no longer use these words is to me a crushing blow to both common sense and to our society as a whole...

Honestly, I am so sick of "Political Correctness" and I hope my readers are as well... We must put an end to this madness and tell anyone that claims we are "not politically correct" to blow it out their asses and actually get a life!

NTS
Posted by Northerntruthseeker at 9:15 AM

Not only end so-called political correctness...but use the 'boycott' power to end abuse of tuition for ridiculous offices such as this. If someone has a problem with 'their' gender, then how in the lower places of hell can they possibly attain an education when they have learned a dumb/stupid/irrational phantom english to address gender? This is absolutely idiotic and ANYONE knowing this before paying tuition is part of the problem. Insanity rules these institutions. Better yet...why don't all these gender-burdens quit making the rest of the population 'their' gender-burden.