This Is Amazing: Jewish Controlled Media Spins Florida JEWISH "ISIS" Fraud Terrorist Tale Claiming He Was Fighting For Free Speech! (This Is No Joke)

In my weekend rant, I did touch upon the recent arrest of that 20 year old JEWISH man who was impersonating a "terrorist" (No shock here..) and was running the fraud of ISIS in America calling himself "Australi Witness" (Still no shock here...)... Further reports have come out since that show that this JEWISH man was fomenting an attack in America, in Kansas City Missouri, where he was going to use "pressure cooker" bombs..(Where have we seen those before?  Does the fake Boston Bombing come to mind?)... "Luckily" the FBI in America got wind of this criminal and were able to arrest this clown at his home in Florida before he was able to carry out this attack...

Since that incident in Florida, the Jew spew media has stayed silent (imagine my complete lack of shock)and has been avoiding this story like the plague... They obviously do not want their gullible and brainwashed American slaves to see for themselves that "ISIS" is in fact a complete fraud, and as we have seen before, these "terrorist attacks" have almost always been carried out by the criminal "Chosen Ones" themselves...

But thanks to the alternative media, this story has not died, and now the Jew spew media has had no choice but to put their spin doctors to use to try to kill the story of their fraud Jewish "terrorist" living in his mother's basement in Florida before everyone finally puts two and two together and realizes that "terrorism" itself is a complete scam.....And I want to turn to the following report that comes from a true fellow truth seeker, Greg Bacon, who writes the excellent blog "Goon Squad" at www. careandwashingofthebrain.blogspot.com... Greg's report is entitled: "Florida Jew Terrorist Was Actually Fighting For Free Speech!" and I have it right here for all of my own readers to view and ponder... I have my own thoughts and comments to follow:

This is how the corrupt Jew MSM spins the lies when the real architects of Muslim terrorism, Jews, get caught setting up a False Flag attack on 9/11 in KC to be blamed on 'jihadists.'

The lies being told are that the Jew terrorist was actually a champion of free speech and harmless because he was just a nerd....A psychopath nerd who got people killed is the truth.
A Jew terrorist that helped set off another Jew False Flag in Garland, Texas and was coaching another to blow up a 9/11 event in Kansas City with a pressure-cooker type bomb, very similar to the one allegedly used in the Boston Marathon False Flag is just a nerd, fighting for free speech and deserves our sympathy, since he is suffering from depression(see below).

But Fairfax Media can reveal that Goldberg's trolling also goes well beyond pretending to be an IS terror wannabe. When Melbourne lawyer, Joshua Bornstein, woke to find a violent anti-Palestinian blog in his own name in the Times of Israel in May, he was subject to global outrage.

That hoax, too, was the work of Goldberg, and he laughed when the finger of blame was mistakenly pointed at white supremacists.

Goldberg has set up a fake account in the name of Australian Muslim preacher Junaid Thorne, and promoted an illusory friendship between Australi Witness and anti-Islamophobia campaigner Mariam Veiszadeh - the intention both times being to smear them.

He has masqueraded as a neo-Nazi blogger called "Michael Slay" on the site Daily Stormer, and as a fictional Australian left-wing anti-free speech activist called "Tanya Cohen". He's caused significant harm to anti-sexploitation campaigner Caitlin Roper by setting up a fake account in her name and then defaming transsexuals.

Apart from the thrill of trolling on the world's most sensitive and politically fraught subjects, Goldberg appears to be driven by a single ideology: purist notions of the right to free speech.

Terrorism analyst and director and co-founder of the SITE Intelligence group Rita Katz was quoted as saying Australi Witness held a "prestige" position in online jihadi circles and was "part of the hard core of a group of individuals who constantly look for targets for other people to attack", and actively seek recruits for IS. 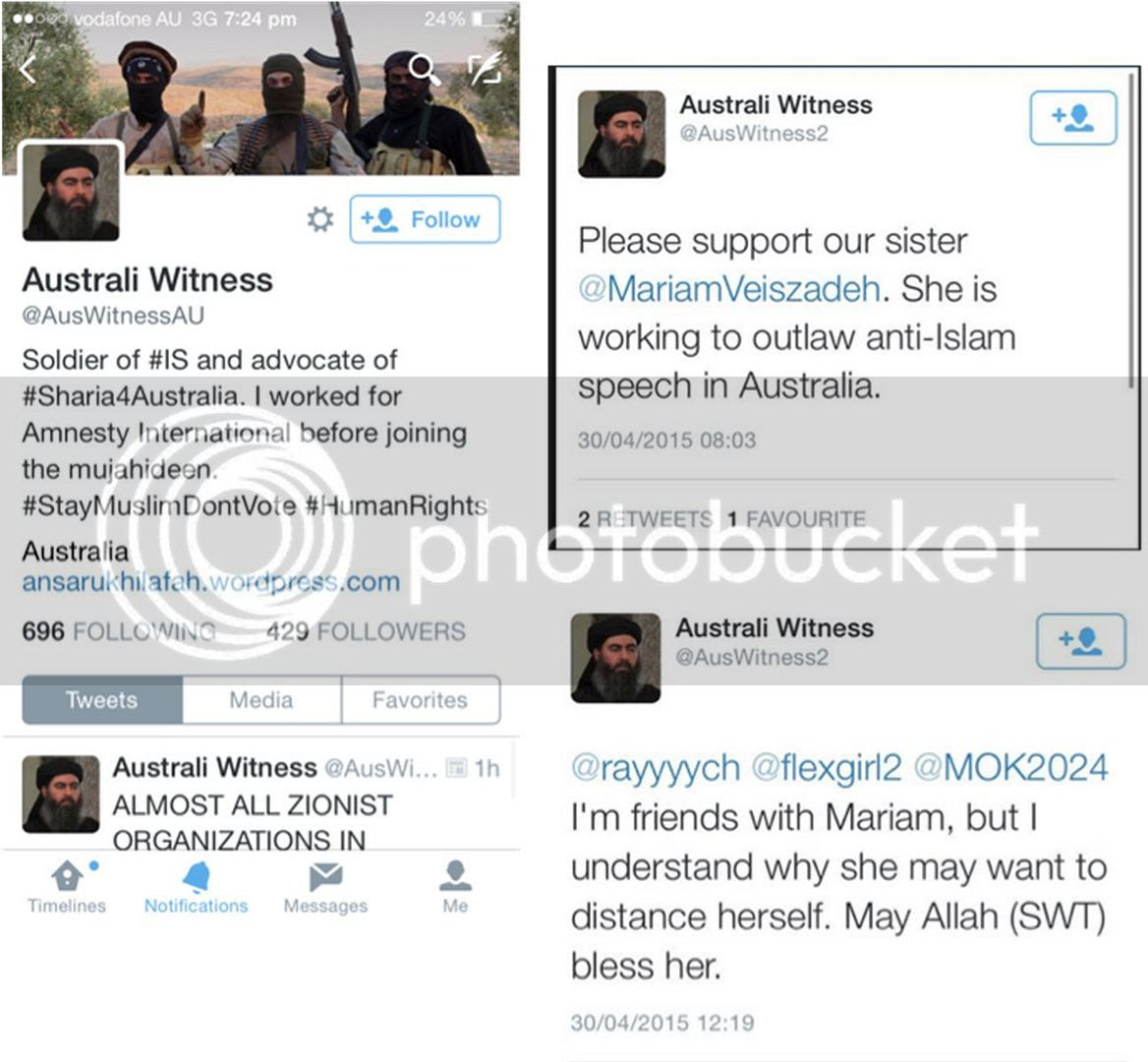 Our old friend, Rita Katz, who has been behind many of those 'al CIA Duh' videos featuring a dead Osama Bin Laden and those fakey ISIS head chopping off videos was also mobbed up with Joshua Ryne Goldberg.

Goldberg also fought for the freedom to rape feminists. But living in his Mommie's basement, the only one he had sexual encounters with was his right hand.


Joshua Goldberg, the fake Aussie jihadist, had a hand in every online fight

The young Florida man who was arrested after posing as an Australian jihadist was a key player in a large number of online controversies, including the smear campaign against an American black activist who was publicly accused of lying about his race.

Joshua Goldberg, 20, who had been calling for terror attacks in western countries under the guise of jihadist "Australi Witness", was also at the centre of the woman-hating campaigns known as "Gamergate" and a behind a blog called "Philosophy of Rape" on which he wrote that "whores and feminazis need to be put in their place through rape".

Jew terrorists, whether in the West Bank burning alive babies or in Florida, setting up False Flags, get help from their fellow Jew travelers in the MSM, who are now spinning the lie that this poor dear was suffering from depression, setting up the coming legal circus so Goldberg either gets sent to some comfy mental facility or the lush 'Club Fed' prison complex in Butner, NC, where he can join other Jews like the Wall Street con artist Bernie Madoff or the Israeli spy, Jonathan Pollard.

Wonder why ZNN and FOX N*** are avoiding this news?

Even Alexa Jones at "Infowars" is avoiding this subject. Gosh, why is that?

Here's another Goldberg who is a blowhard for the Jew MSM and spent time as a concentration camp guard in Gaza.


NTS Notes:  WHY am I not surprised at all that the Jew spew media is indeed spinning this story to this ridiculously laughable extent?   Honestly, do they really now believe that the American public are that stupid and gullible?

It does not take rocket science to see that the fraud of ISIS is exactly that... A FRAUD!   I have repeated again and again in previous articles at this blog that these fraud terrorist groups are there for one purpose.. To try to scare the crap out of very gullible people so that they will blindly follow their criminal governments as they go to war against innocent nations... ISIS is doing their part in scaring Americans into the false belief that they must support the equally fraudulent "war on terror" and blindly support their criminal government as it destroys nations such as Iraq and especially Syria....

Wake up, everyone... This exposure of this fraud "terrorist" in Florida should be spread everywhere and should alert even the most gullible people that the entire war against "ISIS" is a sham created by the criminals in the United States and especially Israel....

NTS
Posted by Northerntruthseeker at 10:12 AM