The Charleston "Shooting" Was A Pre-Planned Operation: Active Shooting Drills Conducted In Charleston During Time Of "Shooting"!

I knew that something was very wrong with this Charleston, South Carolina "shooting" from the very beginning.... Everything about this supposed shooting of 9 people in a church in Charleston absolutely made no sense at all and stunk of another set up along the lines of the Sandy Hook operation... Knowing from what I and others have seen before with these "shootings",  I smelled a rat and decided to do as much research as possible before calling it for what it truly is...Another active shooting drill that went "live"!

Now comes the evidence that this was indeed a set up and part of the criminal US Department Of Homeland (In-)Security... And I want to thank a fellow truth seeker who calls himself "Soldier Of Yah" who writes the blog: "Truthseeker Archive" at www.truthseeker-archive.blogspot.com, for bringing this absolute bombshell to my attention.... His article is entitled: "BOOM! Charleston Shooting Hoax Happened During Federal (DHS) "Active Shooter" Drill!" and I want to present the evidence right here for everyone to see for themselves... I have my usual thoughts and comments to follow: 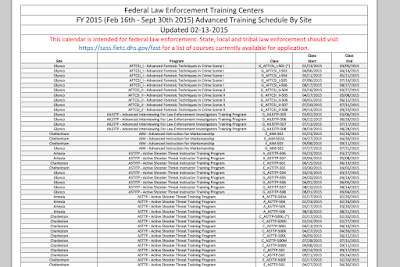 NTS Notes:  This proves it... This Charleston shooting was a set up from the word go,and was most definitely an "active shooter" drill that went "live" just like they pulled the same stunt with Sandy Hook!

The big question now becomes... Did anyone actually "die" in this latest "shooting" and is the "shooter" real, or simply another "patsy" to take the fall for this fake shooting?

The fact is also that the US Government just gave some $29 Million within days of this latest "shooting" to the "victim's families", and to me that is the payoff for the piss poor "crisis actors" that were used at this latest shooting... If you want to see how laughably ridiculous these actors were for this latest "shooting", watch the following video as a prime example:

I for one am worried now that the American public will fall for the propaganda effect of this "shooting" and actually support the criminal US Government's latest initiatives for "gun control"... Hopefully people everywhere will spread this and other evidence of the fraudulence of this Charleston "massacre" quickly before the criminals are able to take away the last line of defense by the American people against corruption, which is of course their guns....

And I do wonder when the wonderful people at the TUT-ankhamen website, and of course the Spin-doctor, will come out and decry and insult the people that see this as a hoax like Sandy Hook... These fools have been stuck since their blatant lies about Sandy Hook being real, and I wonder what they will have the nerve to say about this one?  Their disinformation tactics are almost laughable now.....

I am indeed calling this one as I see it... A planned operation that went live with the usual crisis actors involved... Hopefully the American people will see it this way as well....


Posted by Northerntruthseeker at 1:27 AM

When the House needed to pass the economy wrecking TPP, a SC church gets shot up, diverting attention.
Now the Senate is working on passing TPP and another Rita Katz special showing prisoners getting drowned pops up.

I agree with you, NTS ... I think this is 100% staged. What did the "deceased" get out of it? Well, I'm sure a lot of money, but I'm sure a nice legacy for them is that they are helping to get rid of the Confederate flag. American Everyman did a nice analysis of some of the ridiculous propaganda photos that were taken of "Roof" just before his shooting spree in Charleston. You always have to ask yourself, when you see a photo, who took this, and why???

He reloaded five times? What? Were people standing in line waiting for their turn to be shot?

In Arizona, Judge Roll really did get assassinated, even though the other frauds were not victims.Gabby Giffords, the main fraud has gotten a lot of political mileage for herself, especially regarding gun control. Now in Charleston, it appears that Clementa Pinckney was really murdered, maybe the only real victim. Why? For sure Obama has major plans for what will happen when he goes there to give the eulogy for Pinckney. Charleston was selected to blow up big time with riots, but hasn't yielded the expected result, yet. So something evil must still be in the works.

Isn't this what Nazi Germany did to scare their citizens? Fake mass atrocities. ..?

After recognizing that it was a mistake to attempt hang his hat on the Charleston event as a real event, and validating his lonely position on Sandy Hook, the ugly truth dope has moved on to frying bigger fish.

Later this month, the Southern Poverty Law Centre meets in Budapest to discuss the combatting of "white supremacism". When Tel Aviv and Brooklyn are just too crowded, go Judapest. Remember, I said to keep your eye on that vile, little, city.

Regarding shootings; search 'Jeremy Cook, London Ontario Canada, June 15 2015'. Young and WHITE Jeremy tried to recover his lost cell phone via a location app. He made the fatal mistake of approaching an aspiring surgeon, economist, and rap artist, who were sitting in a car. A confrontation ensued leaving Jeremy plugged with black bullets of pure hate. Police are still looking for three BLACK suspects.

Fake mass atrocities to scare their citizens? Ala the purported ability to gas and cremate 12,000 people in 24 hrs? I'm afraid that other ethnicities invented that atrocity. In fact, they continue to milk that notion and scare their citizens with it to this day.

Even the CNN video with the heckler looks fake. Compare the lighting and audio. The two men are not quite reflecting light and look very dull in comparison to the woman. Live video? I doubt it. I think they were in a studio.

This is not meant to add more confusion. However, let's look at CNN's history. They are known for their shenanigans and this one plays right into the script. Just another CNN green screen production?