False Flag Attack In Tunisia: Setting The Stage For US Attack On Syria!

The Jew spew media in the United States has been going hog wild with their continuing reports on the BULLSHIT Charleston South Carolina "massacre" that is now proven beyond a shadow of any doubt to be another false flag attack where absolutely NOBODY has died.... It came of course with the usual bells and whistles as well as the piss poor crisis actors.... And of course the American people have been duped again just like all previous false flag attacks...

Now, today, comes reports from Tunisia of the latest and greatest "false flag" attack, starring the BULLSHIT "ISIS" entourage of US/Israeli Mossad/CIA agents.... To help summarize this latest attack, I want to turn to the most excellent report that just came out from a true fellow truth seeker, Aangirfan, who writes of course "Angirfan" at www.aanirfan.blogspot.com.   The article is entitled: "Tunisia: False Flag Attack On Port El Kantaoui" and I have it right here for all of my own readers to view for themselves... I have as always my own thoughts and comments to follow: 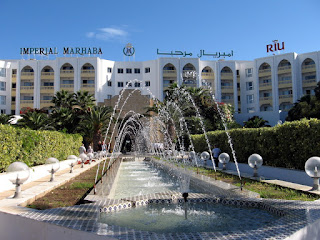 On 26 June 2015, there was a false flag attack at Port El Kantaoui, near Sousse, in Tunisia.

Reportedly, at least 30 people have been killed.

The gunmen arrived at the beach on an inflatable boat.

The attackers first opened fire at tourists on the beach.

They then entered the Imperial Marhaba Hotel and began firing from the machine gun that they carried in an umbrella case.

They also carried grenades, according to witnesses.

The Riu Bellevue Park is also believed to have been attacked.

Reportedly, one gunman was killed.

The attacks in both France and Tunisia could indicate an attempt by the USA and its allies to mould public opinion before launching a full scale invasion of Syria.

On 20 February 2015, in Tunisia, "the US ambassador was expelled from the presidential palace."

Reportedly, US Ambassador Jacob Walles angered Tunisia's President Beji Essebsi when Walles tried to pressure him into accepting a US military base in Tunisia.

Reportedly, President Essebsi not only expelled Walles from his residence but also refused a request to have a phone conversation with President Obama.

Tunisia: US ambassador expelled from the presidential .... / Massacre in Tunis | crimesofempire. 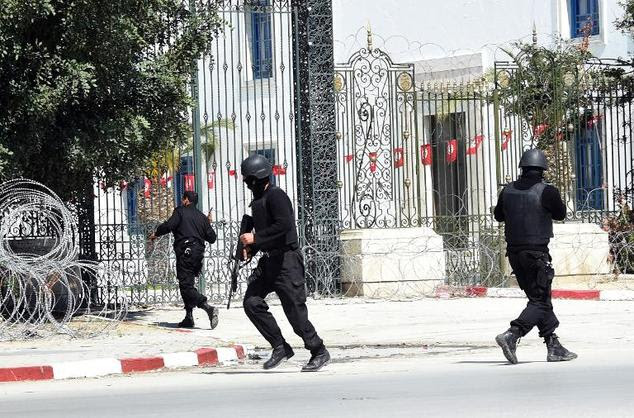 On 18 March 2015, tourists in Tunisia were hit by a group believed to be working for the CIA and Mossad.

Tunisia shooting: At least 17 killed at Bardo Museum in Tunis In 2010, we predicted a coup was coming in Tunisia, but were ignored by the big bloggers.

In 2002, the CIA and its friends reportedly carried out a false flag attack on Djerba in Tunisia.

The CIA, Mossad and the Djerba Bombing..

Reportedly the CIA has many assets within the militaries of Tunisia and Egypt.

In 2010, the CIA/NATO/Mossad false flag operation, in Tunisia, began the Arab Spring.

The official story of the death of Mohamed Bouazizi, the street vendor, is fiction.

The CIA put the Islamists into power.

The Islamists then provided the CIA with fighters for ISIS, for the CIA's fight against Assad in Syria.

Tunisia has provided the largest contingent of fighters - well over 3,000 - to ISIS.

CIA recruiters pay between $1,000 and $3,000 to prospective fighters, a huge sum for an unemployed Tunisian.

The Islamists allowed the Mossad to increase its activity in several Tunisian cities.

Tunisia, under President Ben Ali (above), was a Moslem success story.

It was liberal, run by technocrats and relatively prosperous.

In December 2014, former Ben Ali ministers won the elections in Tunisia and got back into power!

Now, the CIA and Mossad seem to be hitting the moderates once again.
Posted by Anon at 07:37


NTS Notes: Notice the section of this article where I emphasized the molding of "public opinion" for the invasion and destruction of Syria.....

With so much of the world now waiting for the next ISIS "crisis" to come out, and with the recent release of the criminal Jewess Rita Katz's SITE BULLSHIT videos showing "ISIS executions" (especially the dunking prisoners in water to drown trick) it was only a matter of time before we would have this latest and greatest false flag attack... And here we go.... The timing is just too perfect....

The fact is that the criminal and psychotic state of Israel and their dumb ass minions occupying the US Government have been searching for a new way of getting their nice little attack against Syria going, and look out, here is this "ISIS" attack in Tunisia to sway world opinion to the idea that an attack on Syria is now needed to "wipe out" the FRAUD "ISIS" threat!  Watch for this, for the call for the invasion of Syria is definitely coming...

The moment I heard that 'ISIS' was responsible for this attack in Tunisia, I called it bullshit.... Yes, some people most definitely died in this attack, but to the Israelis and Americans with their twisted thinking, what are a few 'dead Arabs' in the bigger scheme of things?

Again, this is just too perfect for the scoundrels in our criminal governments that want to perpetuate their fraudulent "war on terror"..... I can guarantee that we have not heard the last of these attacks and yes, the calls for more effort to end the ISIS threat through the invasion of the innocent state of Syria will be announced soon...  Do not say I did not warn you....

NTS
Posted by Northerntruthseeker at 10:06 AM

The criminal corporate cabal will have their war with or without public support. The UK's vote against war with Syria last year was just a game of charades to convince us all we still live in a democracy - we don't and never have done! Democracy comes from the Greek word demos meaning people and kratia, power but its just a figurative term with no meaning -the time was not right then but it could be now. There's no doubt this is another corporate staged false flag in the name of ISIS/ISIL which we know to be a joint intelligence operation involving the CIA, British intelligence and Mossad who control and created it. Notice the pattern?. Its the same cabal at work behind it as in the church shootings and the 'white supremacist' (no such thing!). I doubt also anyone was actually killed. They don't need to anymore. They just need to stage an event and use theatrical props and payed crISIS actors to repeat the mantra over and over again which pans out something like ''look at these evil terrorists. Help! Something must be done!!. We need more SURVEILLANCE of young people to stop them being radicalised into killers!!", and so on, so forth ad nauseam! Domestic and abroad its the same Hegelian Dialectic at work and will grant more power to the govt.

Notice the word SURVEILLANCE which I thought was important to highlight because thats what this is event is really all about. They want to push more draconian laws that allow all citizens to be monitored electronically, collecting as much data as they can and building up character profiles of every living person on or off the internet. They want to destroy our privacy because they don't believe we have a right to privacy anymore because "look!!, there's extremists running around shooting everything up. We need to SURVEY everyone just to make sure they're not buying into harmful ideology!!". But they're more concerned about those who would expose and take up arms to fight the govt, not their enemies, they've already sorted that. And the dumbed down public will grant them their request because they have nothing to hide, right! All this and at the same time they are grooming these fools to fight in their Frankenstein machine against all the enemies of the NWO!

Those who would surrender their liberties for freedom deserve neither liberty nor freedom.

You say: "to the Israelis and Americans with their twisted thinking, what are a few 'dead Arabs' in the bigger scheme of things?"

At least 15 from the United Kingdom have lost their lives and that may rise to two dozen, so they are not killing Arabs here! People from other countries have died and why didn't the gunman shoot at the Tunisian people?

I'm not saying I do not believe that this may be another false flag - it could very well be, but when I read that part of your blog, it just didn't make sense because MANY non Arabs were reportedly killed.

The primary victims like in all false flags in the Middle East is always the Arabs...

I have no qualms in my statement as being fact. The fact that foreigners were also killed only helps to fuel the push for war on Syria.

The shooter waved Tunisians out of the way and deliberately targeted foreigners (up to 30 British dead). Now British forces are going to Tunisia, and a former head of the British army said today that the UK must fight ISIS on the ground.

A few dead arabs!? Don't think any but the gunman were killed were they?

Well you are right about the invasion of Syria.Michael Fallen the Uk defence minister is calling for support for this saying we think that Isis planned this from northern Syria and we want to attack them.But not too soon probably in the autumn.What does he mean?I guess he will give them a few months to move on from their location in case the RAF will hurt them.