Has The Psychotic State Of Israel Used Tactical Nuclear Weapons In Yemen? You Decide!

To this day, most people in the gullible United States of America, and even right here in Canada, are still refusing to look at all of the evidence and instead still continue to believe that the criminal and psychotic state of Israel does not possess nuclear weapons... These fools are of course brainwashed by the Jew spew media that continues to promote the absolute LIE that the peaceful state of Iran and others in the middle east are the ones wanting nuclear weapons, and refuse to even look at the true elephant in the room, which is of course the psycho state of Israel with its estimated 300+ nuclear weapons and many different delivery systems....

Last year, I pushed forward an article that Israel had used tactical nuclear weapons in its air attack on munition depots and military bases outside of Damascus in Syria.   Even though the alternative media was showing strong evidence that Israel had indeed nuked Syria, the Jew spew media and the liars in our own governments continued to downplay and hide the evidence and instead ran with reports that Israel had used conventional bombs in airstrikes against Syrian targets.....The videos and evidence showed clearly that Israel indeed used tactical nuclear weapons against Syria, and claims came out that the weapons were in fact low yield neutron bombs which Israel is known to have a large quantity.....

Now comes the war in Yemen against civilian targets by the crypto Jewish regime in Saudi Arabia, with strong support by the criminal state of Israel itself.... In the last few days, I was sent several emails by regular readers of this blog that Israel had in fact used tactical neutron bombs against civilian targets in and around the Yemen capital city of Sa'na!   Initially I had thought that the reports are wrong, simply because I believed that even a most immoral and inhumanly psychotic nation of Israel would not consider using such weapons of mass slaughter against civilians.   But now new evidence has come to light that shows that again we are indeed dealing with creatures that are not even human!

I want to present the following very important report that comes from a real truth seeker, Greg Bacon, who writes the fabulous blog: "Goon Squad" at www.careandwashingofthebrain.com, that presents very damning evidence that Israel has indeed launched tactical nuclear weapons against the innocent civilian population of Yemen...  The article is entitled: "Did Crypto-Jew Saudi Arabia Nuke Yemen?" and is definitely a must read by everyone... I have it here, and of course my own thoughts and comments to follow: 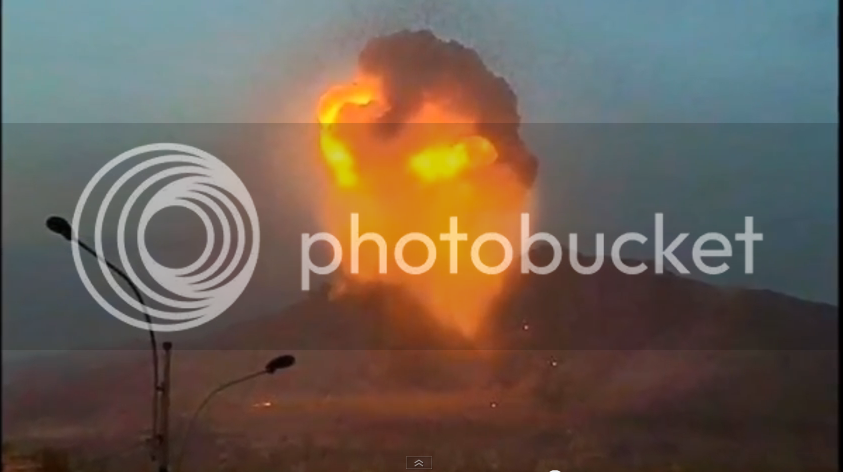 Anyone with half a brain--which leaves out many Americans--know that Israel, having already nuked Syria in 2013, wouldn't hesitate to give their 'brothers in arms' Saudi Arabia, some tactical nukes to use against Yemen.


Nuclear strikes on Syria: The genie is already out of the bottle

The fight against Assad’s brutal regime has taken an unexpected turn late Thursday afternoon when a large weapons cache belonging to the so-called national protection force in Homs city, an arm of Assad’s Shabeeha, was destroyed. The explosion was reminiscent of the attack on Qasyoon mountain, a stronghold for the Syrian army and a location said to house missiles targeting Israel.

It was first reported that the missile fuelling station had blown up which seemed like a reasonable proposition especially since an ammunition depot was targeted.

But the two explosions in Homs and Qasyoon share the same property: They are both above ground air bursts according to Greg Thielmann, an expert on arms control policy whom I spoke with on Saturday at great length. I was first alerted to the connection by slow twitter chatter right after the bombing in Homs.

Needless to say I was shocked at what he told me next: “The fact of the matter is, what we are seeing in both these cases is a tactical nuclear strike, probably by cruise missiles launched from aircraft's near the borders of Syria or right off the coast in the Mediterranean.”

But sure, Greg, wouldn’t this mean a nuclear holocaust? Not so he says. “Tactical nuclear weapons lower the threshold on use of a nuclear bomb as their modern incarnation can be tuned in yield in order to target military sites using stand off weapons without escalating by destroy surrounding civilian infrastructure.”

He went on: “Keep in mind a nuclear bomb sounds like a huge device, but it can have a yield as small as the equivalent conventional payload carried by a formation of 5 F-15s. Sites in Syria are inaccessible to these jets due to the Russian support available in the field of air defense. So these strikes are an option for the west to implement its policy.”

The likely assailant in both cases is Israel he claims: “Israel is the only nation that can deploy these sorts of weapons with impunity without fear of a counter-attack. Syria has shown no appetite to get into a shooting fight even over the deployment of such weapons”.

So for the psychotic Saud regime to get some nukes from Israel and drop them on the feisty Yemeni resistance to Jew tyranny is more than plausible, it appears to have happened.

Compare the mushroom clouds and blasts from the nuke used on Syria;

To the one used against Yemen:

Saudis have begun to wipe Yemen off the map. Tactical strikes have hit the city. Shocking video reveals proton bombardment from a neutron bomb.
Israel is reported to be the one to deploy such neutron bombs. Any doubts about the nuclear attack on Yemen attributed to Israel, as evidenced in two Israeli F16s shot down and forensically identified, are now gone. Forbidden strikes have brought about a storm of worldwide protest. Obama has recently promised to provide every assistance including US military force to any "external threat" the rich Arab states of the Gulf may face. Pravda.Ru

But wait, you say, Alex Jones hasn't touched this subject, so it can't be true!

Anyone who doesn't know Jones is a Jew disinfo outlet designed to lead the sheeple astray better not handle sharp objects.

And that also goes for 'Mr. Know-it-all,' whose ego is so huge, he'd never admit he might be wrong on this.

Meanwhile, back in the USSA, the Zionist MSM is barfing nonstop about the latest Muslim bashing contest being held in Phoenix, AZ to distract the sheeple from Zionist evil.

Add in that two F-16's got downed in Yemen lately and that Saudi Arabia has no F-16's, but Israel does, and that Israel, besides being bat-shit crazy, is also very vindictive and the facts seem to point to a nuke being used against Yemen.


NTS Notes:  The videos alone are very damning indeed... The bright flash and tell tale mushroom cloud that follows is absolutely what one would see with nuclear explosions.   And of course the video of the nuclear attack in Syria shows a nuclear blast that is absolutely almost identical to what was witnessed in Yemen....

I at first could not fathom the idea that these monsters would consider using nuclear weapons against civilians.. But again we are dealing with the psychos in Israel and the crypto Jews that run Saudi Arabia that look upon the rest of us as subhuman Gentiles and nothing more than cannon fodder.. Therefore I would not put it past them that they would use Israeli built neutron bombs against civilians...

And where are our governments in all this?  Considering the almost 100% control over the morons and slaves in our governments by the Jews and the almost 100% total control of all media outlets, it is no wonder that we find absolutely no reports about this travesty for the general public to see for themselves.... It therefore again falls on the alternative media to present this evidence for all to witness....

Again, I have to ask the question as to whether Israel, or their crypto Jewish friends in Saudi Arabia would have done such a heinous act against the people of Yemen?   Honestly, considering the nature of these freaks and their total hatred for the rest of mankind, I would not put it past them.....

NTS
Posted by Northerntruthseeker at 9:20 PM