The Jews 1962 Blueprint For Taking Over America

I used to state here many times that America as a nation was finished... Since that time I have found absolutely nothing to change that stance, and in fact America is much much worse that I would have ever expected it to become... That nation that once prided itself as the bastion of freedom in the world  has now become a brutal police state of tyranny where the average American citizen no longer enjoys any form of freedom what so ever... On top of that, the American economy is crumbling and facing bankruptcy thanks to a fraudulent debt load created by a manipulative Jewish controlled criminal banking system.  And we are right now watching many American citizens living impoverished and destitute in the crumbling infrastructure of many American cities.... It is indeed a mess and the worse may be yet to come...

I have long sought out many truths in these articles about the true evil that has been the cause of the demise of the United States of America, and right now I want to present a great article that comes from Greg Bacon's website: "Goon Squad" over at www.careandwashingofthebrain.blogspot.com .  It is entitled: "The Jews 1962 Blueprint For Taking Over America" and contains some very important information about how indeed these monsters carefully planned over 50 years ago for their taking over and the destruction of America.   I have that article right here for everyone to see for themselves, and of course my own thoughts and comments to follow:

The Jews 1962 Blueprint for Taking over America

"We have castrated society through fear and intimidation. Its manhood exists only in combination with a feminine outward appearance. Being so neutered, the populace has become docile and easily ruled. As all geldings in nature, their thoughts are not involved with the concerns of the future and their posterity, but only with the present toil and the next meal."

"We Jews have put issue upon issue to the American people. Then we promote both sides of the issue as confusion reigns. With their eye's fixed on the issues, they fail to see who is behind every scene. We Jews toy with the American public as a cat toys with a mouse."

50+ years of lies, subterfuges, bribes, threats, assassinations, spying on the USA, false-flags, infiltrating Christian groups, intimidating colleges and brainwashing their students and control of the MSM; Wall Street and the Federal Reserve have helped install Israel as the de facto head of the USA.

If one was paranoid, one might think these guidelines for taking over America were straight out of the "Protocols of the Learned Elders of Zion."


"Our power has been created through the manipulation of the national monetary system. We authored the quotation. 'Money is power.' As revealed in our master plan, it was essential for us to establish a private national bank. The Federal Reserve system fitted our plan nicely since it is owned by us, but the name implies that it is a government institution. From the very outset, our purpose was to confiscate all the gold and silver, replacing them with worthless non-redeemable paper notes. This we have done!"

Document Page 1. In the early 1960's, Israel funneled more than $5 million into US propaganda and lobbying operations. The funding, equivalent to more than $35 million in today's dollars, was laundered from the the quasi governmental Jewish Agency into an Israel lobby umbrella group, the American Zionist Council. This two page master plan was subpoenaed by the Senate Foreign Relations Committee and discussed in the 1963 hearings on Israel's US foreign agents. 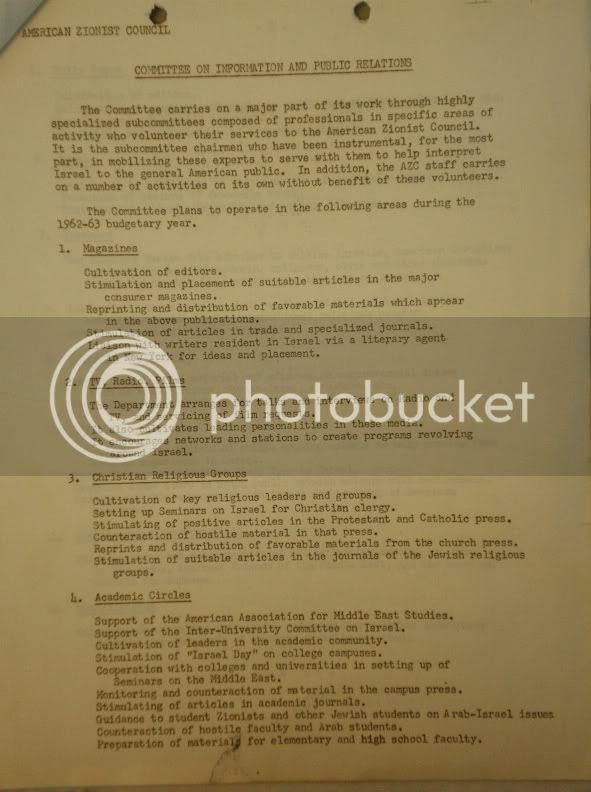 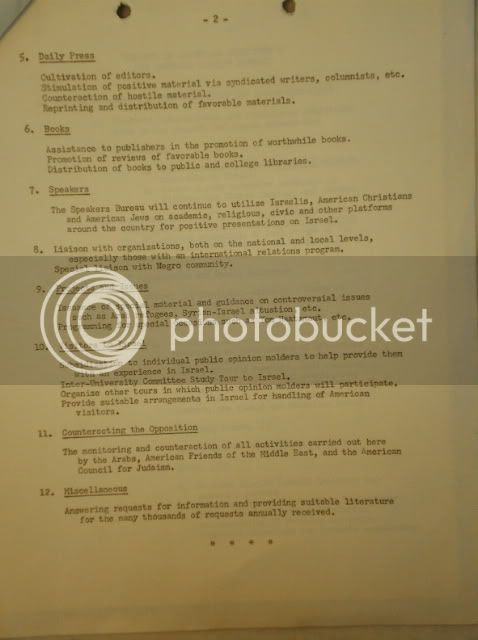 "At first, by controlling the banking system we were able to control corporation capital. Through this, we acquired total monopoly of the movie industry, the radio networks and the newly developing television media. The printing industry, newspapers, periodicals and technical journals had already fallen into our hands. The richest plum was later to come when we took over the publication of all school materials. Through these vehicles we could mold public opinion to suit our own purposes. The people are only stupid pigs that grunt and squeal the chants we give them, whether they be truth or lies."

All quotes from a 1976 interview with Harold Rosenthal, aide to then NY Senator Jacob Javitts.

These documents and news stories were obtained under June 2008 Freedom of Information Act filing. More on the penetration, subversion and takeover of the US government by Israel is available at the Israel Lobby Archive.

After reading these pages, compare them to the "Protocols of the Learned Elders of Zion" which we have been told is a fraud or a forgery or a fake, that is, if you can still think for yourself or do you enjoy your slavery so much, you no longer care?
Posted by Greg Bacon at 2:18 AM
NTS Notes:  A fabulous find indeed by Greg.....

There are many critics out there that have stated that the Protocols of the Learned Elders of Zion are indeed a "forgery", but that term means simply that what has been published is a "copy" of an original document!  And I must point out that even though many call the Protocols a "fake", I ask them to please explain to me WHY it is that the Jews are following the methods laid out in the Protocols right to the letter?

I have been saying for years now that America needs to wake the hell up and put a stop to the Jewish push for the domination of their nation... But sadly, I do sense that it is now too late for the United States, as we watch the death throws of that formerly great nation as the Jews are about to pull the plug and move onto another host nation to suck the life out of.... I believe that China is next on their hit list....

NTS
Posted by Northerntruthseeker at 8:10 AM

Good article NTS! Check out this recent article by Lasha Darkmoon on China and the Jews.
http://www.darkmoon.me/2014/china-jews/

And this may go towards explaining a LOT!