Yes, while world attention has been focused fully on the situation in Ukraine, where the US has imposed a puppet government on the people of that once proud nation and the IMF/Rothschilds have begun fleecing that nation's wealth, there is plenty going on elsewhere in the world.....

Right now, there have been reports over the last two days of "rockets" being launched from Gaza into Israel itself.  This so called "rocket attack" has most undoudtedly been conducted by Mossad agents once more, and the reasoning is simple... Israel is looking for any excuse now to attack and wipe out the populace of that entire open prison camp!

I first want to present the lying media report about this "attack" from the Jerusalem Post online news service, at www.jpost.com, for everyone to see for themselves.... I have that article here and pay close attention to some of the "facts" that the liars in the media state about this "attack"..... I have my usual thoughts and comments to follow: 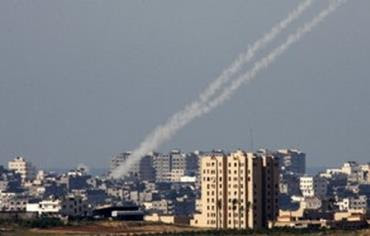 Kassam rockets being fired from the Gaza Strip Photo: Nikola Solic / Reuters
Israeli communities near southern and northern Gaza have come under heavy rocket attack on Wednesday evening. The IDF said at least 40 rockets had been fired in the largest attack since 2012's Operation Pillar of Defense.

The IDF said eight rockets hit urban, civilian areas. One rocket landed in Sderot, according to police spokesperson Micky Rosenfeld, although there were no immediate reports of casualties.


Israeli media reported that up to 55 rockets had been fired into Israel in the deluge of projectiles.

The Islamic Jihad claimed responsibility for Wednesday's attack, saying that over 90 rockets had been fired toward Israel, a spokesman for Al-Quds told Palestinian news agency Ma'an.

"You haven't yet seen the extent of our capabilities," added the spokesman, who further threatened to fire extended range missiles.

The Iron Dome rocket defense system shot down three of the rockets, according to the IDF Spokesperson's Office.

On Tuesday, the Israel Air Force struck an Islamic Jihad cell in southern Gaza, minutes after identifying it as being behind a mortar attack on an IDF unit on the Gaza-Israel border.

According to military sources, the terrorists fired a mortar shell at soldiers who were conducting routine security measures near the frontier. The IDF released a video on Wednesday of the Islamic Jihad members firing toward army forces the day before.

Islamic Jihad said the Israeli strike killed three of its operatives. The IDF confirmed the aircraft’s hit on the terrorist cell, and said that the aircraft had then returned safely to its base. The army added that it would not tolerate any attack on military forces operating along the border.

Islamic Jihad has been behind a trickle of attacks in recent days that have tested the cease-fire in place between Palestinian terrorist groups in Gaza and Israel.

Earlier this month, the IAF struck an Islamic Jihad rocket-launching cell about to fire rockets at southern Israel from northern Gaza, killing a member of the terror organization.

Last week, the Israel Navy intercepted an Iranian arms ship destined for Gaza, which included 40 Syrian made M302 rockets that had a range of between 90 to 160 kilometers, 80 mortar shells, and nearly half a million rounds of ammunition. Islamic Jihad was one of the intended recipients of the arms shipment, according to Israeli assessments.

The IDF will respond to the largest rocket attack on Israel since 2012, an army source warned on Wednesday.

OC Southern Command Maj.-Gen. Sami Turgeman told local government officials from the south, "We have no intention of ignoring any fire directed at us."

In the coming hours, officials from the Home Front Command and IDF Southern Command were set to meet with local government representatives in the South to discuss safety instructions. For now, residents of the Gaza-border were advised to remain close to safe zones, the military said.

Defense Minister Moshe Ya'alon said Israel will not go back to its daily routine following the barrage of rockets this evening.

"We will not allow Islamic Jihad or any other element in the Strip to disrupt life in the South," he said. "It won't be quiet in Gaza either, in a way that will cause Islamic Jihad terrorists to regret the attacks they carried out.

"Hamas is responsible for what occurs in Gaza, and it too will have to take into account the fact that won't tolerate fire at us," he continued. "If it does not know how to enforce the quiet, it too will pay a heavy price."
Yasser Okbi contributed to this report.


NTS Notes:  Is it not obvious?  This attack is actually no attack at all... The so called "rockets" as they are always claimed by the criminal Israelis are nothing of the sort and they ALWAYS seem to never hit any targets or kill any Israeli civilians!  Honestly, what are the odds?  Either this "Al Quds" group are poor shots, or we are indeed dealing with another false flag operation just so that the criminal Israelis can have their excuse to march right in and slaughter all of the Palestinians trapped in the so called "Gaza Strip".  I for one am not fooled by this and have always stated that this attack is absolutely being done by Mossad agents operating in the Gaza Strip.

It must also be noted how this and other articles about this "attack" seem to emphasize the "Iron Dome" missile defense system that the Israelis are getting their slaves in the United States to pay for.   The fact is that this "system" is a fraud and has a horrible hit percentage (3 hits out of 40 according to this article), even against a preplanned attack such as this one where the targets are preselected.  But the Israelis are again demanding Washington fork over billions of dollars for this inept system, and their slaves will willingly hand over the money with no questions asked...

And we must indeed look at the "timing" of this "attack"... We just had Miliewkowsky (Netanyahu) claim that "Iran" was transporting "rockets" to their Hezbollah allies on board a ship that has already proven to be false, and we also have the Israelis gearing up for a new war against both Gaza, and Lebanon.... This attack therefore comes right on cue, and again will give the Israeli criminals their excuse to launch another war of aggression against their neighbors.

This "attack" readers is therefore a fraud and a massive lie by the Israelis... They always do these type of "rocket attacks" to try to garner sympathy from the world for the "poor Jews", but by now people everywhere are sick of the whining, and realize that these criminals are indeed liars and land thieves... The world is no longer fooled and can see what Israel is all about!

Posted by Northerntruthseeker at 1:05 PM

It is significant that this "rocket attack" from Gaza coincided with the state visit of British PM Cameron to Israel.

And of course the interception of an Iranian ship full of missiles bound for Gaza once again stressed the "danger to peace" coming from Iran.

How handy if you can create your own problems!

But if the lily white Iranians claim the Jews attack them and many are killed, we must believe THAT?

Been trying to sign in for sometime now and google continually refuses to allow it. Misplaced your email address. Would like you to view the following: http://www.radicalpress.com/?p=4473

Arthur... I have been following those activities for some time...

I truly hope that the latest fight for truth and freedom in Canada wins this battle... Canadians are living in a dreamworld and need to wake up to Jewish atrocities and the truth about our history....

Crossing my fingers, and I do follow your work....