I am back... And again I do feel that I must apologize for those that have been expecting more articles at this blog... This last week I have had to split my time between both business and family concerns, and thus this blog has fallen by the way-side.... I have always said that family comes first and foremost, and the writings that I place at this blog come second.....

For the last few days I have been listening in periodically to the mainstream BS news that the innocent nation of Syria has "crossed the red line" according to the criminals in the Barry Soetoro administration in Washington DC... It does definitely appear that these criminals have had their spin doctors work overtime in trying to sell the American public the same Bullcrap that got them involved in the illegal and unjustifiable invasion of Iraq in 2003 by using the same false rhetoric for an invasion of Syria that may happen as soon as this summer!

But I have wondered about the clowns in the Soetoro administration that have been trying to sell the American people the lies of Syrian chemical weapons as the excuse for a new war for Israel... And according to a new article by Paul Joseph Watson, from the Prison Planet website, at www. prisonplanet.com, it appears that the spin master behind the Syrian chemical weapons lie is actually a fiction writer named Ben Rhodes, with absolutely no government or diplomatic skills, who ran the failed Benghazi Libya fiasco of 2012!   I have that article right here in its entirety for everyone to see and judge for themselves, and I do have my own thoughts and comments to follow:

Ben Rhodes, the White House national security adviser behind the claim that President Bashar Al-Assad used chemical weapons in Syria, is a fiction writer with zero educational background in government, diplomacy or national security who also played a key role in covering up the truth behind the attack on the US consulate in Benghazi.

Yesterday, Rhodes announced that the White House had “high confidence” that the Syrian Army had used chemical weapons, providing no evidence, and that the Obama administration would now take steps to arm FSA rebels, who as has been widely documented are being led by Al-Qaeda terrorists who killed U.S. troops in Iraq. The Wall Street Journal also reports that a no fly zone is being prepared that would embroil the United States in yet another war.

35-year-old Rhodes has been a speechwriter for Obama since 2007 and now enjoys the role of deputy national security adviser for strategic communication. He created the infamous term “kinetic military action” to describe the bombardment of Libya which allowed Obama to skirt around the constitutional question of having to declare war.

Rhodes’ expertise revolves around manufacturing narratives. “He earned a master’s degree in fiction-writing from New York University just a few years ago,” writes Ed Lansky. “He did not have a degree in government, diplomacy, national security; nor has he served in the CIA, or the military. He was toiling away not that long ago on a novel called ‘The Oasis of Love” about a mega church in Houston, a dog track, and a failed romance.”

As Stephen Hayes documents in a lengthy Weekly Standard piece, Rhodes was instrumental in altering CIA talking points to delete references to Islamic terrorists being involved in the attack on the US consulate in Benghazi, setting the foundation for the Obama administration’s cover-up of the incident by claiming the siege was a demonstration against an anti-Muslim film. This was an attempt to hide the fact that the White House had supported Al-Qaeda terrorists in the overthrow of Gaddafi, just as they are now doing in Syria.

Rhodes can also count on the support of the US corporate media in selling fairy tales about chemical weapons, since his brother David is the president of CBS News.

The central involvement of a fiction writer in selling yet another war based on dubious claims about the use of weapons of mass destruction is perfectly appropriate for an administration that is clearly beating the war drums in order to distract from domestic scandals.

“Just a few weeks ago the US Intelligence Community did not believe claims that the Syrian government used chemicals, then, after scolded by the Israelis they changed their tune to a very qualified “maybe.” Now, with no formal investigation at all and no word on the chain of evidence or its source, we are told with absolute certainty that the Assad government has used the weapons. And they can’t tell us because it is secret! Just like magic these things happen when needed!” writes Daniel McAdams.

In addition, the innumerable examples of Obama-backed Syrian rebels obtaining and using chemical weapons – including the recent discovery by Turkish police of 2kg of sarin nerve gas in the hands of Al-Nusra terrorists – have been conveniently swept aside.

The question of why the Syrian Army, which has been achieving battlefield victories via conventional means for months, would use chemical weapons on a limited scale with no appreciable advantage other than to draw international condemnation and a pretext for US involvement, remains unanswered.

The White House is now accelerating America’s involvement in yet another unconstitutional, unaffordable war despite there being little appetite for it on both sides of the aisle and despite warnings that the conflict could escalate into World War 3.

In pledging to increase military support for Syrian rebels and preparing a no fly zone, the Obama administration is openly aiding terrorists who have sworn allegiance to Al-Qaeda.

- FSA rebels have vowed to “fight the U.S.” once they finish with Bashar Al-Assad.


- FSA rebels have been filmed burning US and Israeli flags on more than one occasion.


- FSA rebels have been filmed singing songs that glorify Osama Bin Laden and the 9/11 attacks.


- One FSA group even calls its fighting unit the “Osama Bin Laden” brigade.


- Another video shows FSA rebels chanting, “We are all with Osama bin Laden!”


- FSA rebels have voiced their desire to see the Al-Qaeda flag fly over the White House once the rebels are victorious across the region.


- FSA rebels recently massacred an entire village of Christians while this week they slaughtered a 14-year-old boy for supposedly insulting Mohammed.

President Barack Obama is preparing to add another bullet point to the growing list of reasons of why he should be impeached, by embroiling the United States in another unconstitutional war which will serve little purpose other than to empower terrorists while pouring gasoline on an already raging inferno.


Paul Joseph Watson is the editor and writer for Infowars.com and Prison Planet.com. He is the author of Order Out Of Chaos. Watson is also a host for Infowars Nightly News.

NTS Notes:  Yes, this article does come from Alex Jones' Prison Planet website, but even Mr. Jones and his associates do put up truthful information from time to time.. And this one is indeed dynamite...

It is too bad that the majority of the American public will be like dumb ass sheep and blindly follow their government and the Jewish controlled media false musings, into a new war of conquest for the glory of the criminal state of Israel...This time against the innocent nation of Syria... And thousands of American lives will be destroyed in the process!

I can guarantee now that we will see more and more false reports of non-existent Syrian chemical weapons over the next few weeks, as the criminal American government quietly moves more and more forces to the Syrian borders.... There will be an announcement of a Syrian "no fly" zone, in spite of Russian objection soon, and aerial attacks against Syrian targets probably starting as soon as mid-late July.   That will be followed by American and NATO forces invading Syria directly to aid the "Free Syrian Rebels" (murderous US and Israeli paid mercenaries) which may be mid August or the beginning of September..... The net result will see Syria destroyed, much like Libya and Iraq before, by the end of this fall....Thousands of innocent Syrian lives destroyed.... Another innocent and peaceful nation ruined and destroyed...And the world will again do little against this the latest in the long list of US and Israeli aggressions....

When the heck will people finally wake the hell up and say "Enough!"?

*Update, June 15th, 2013.... I just got an email to inform me that Ben Rhodes is also Jewish...... Imagine my lack of shock.....I guess Rhodes indeed wants to see American men and women fighting and dying for his cherished Israel.... Reminds me of this poster: 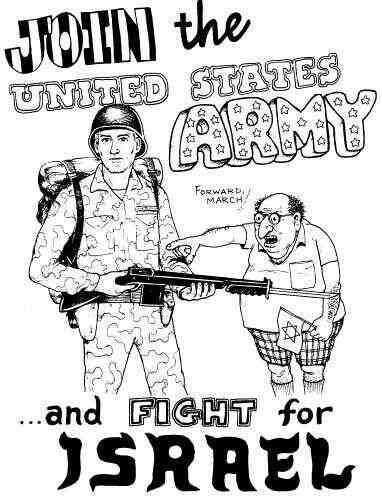 Posted by Northerntruthseeker at 10:30 PM

A study of Nazi Germany and the Third Reich goes a long way in understanding what's happening today on the world stage. Hitler played a big role in the start of The Muslim Brotherhood [1928] and the Islamic Jihad of the present day. Hitler introduced Islamic jihad into the very heart of Europe:

Hitler also had die-hard Jewish Zionists in the Third Reich :

"From Fuhrer To Florida" :

Hitler had the blood/DNA -- the spirit -- of a donmeh Jew. Donmeh Jews are Jews who worship Sufism-Islam. Ultimately, they have no loyalty to either Jews or Muslims [or Christians]; Just to their New World Order they want to impose on the whole world. Very sick.

There is a nexus point where Nazism, Islamic Jihad, and intense war-mongering Zionism have everything in common ; The nexus point is in Turkey and the Donmeh Sabbatean Jews stand at the very center of the nexus point.

Why all the leaders of the West allowed the Donmeh-Sabbatean Jews so much power is beyond me. "So-called" leaders would be more accurate.

The Third Reich was yet one more step towards the NWO. What's happening today is a continuum of World War Two :