I have been following the news more closely these days in regard to the real situation happening right now in Syria.  The fact is that the criminal state of Israel along with their slaves in the US Government have long sought to have Assad removed as President of Syria, and to have the Syrian nation destroyed as a threat to the criminal Jewish state.

We have all seen by now the Jewish controlled mainstream media going absolutely nuts in regard to the recent massacre at Houle in Syria, and trying to put the blame on the Syrian government.   But we all know that Assad would not be stupid enough to commit his forces to killing his own civilians.  In doing so, would be suicide, for the international community would have their excuses to invade Syria and have him removed from power.  So what is the real truth about who is responsible for the massacres?

To help answer that important question, I want to present a new article from Stephen Lendman, that comes courtesy of my friend Noor at Snippits and Snappits (www.snippits-and-slappits.blogspot.com) that is entitled: "Insurgents Named Responsible For Syrian Massacres".    I have that entire article right here for my own readers to view for themselves, and of course my comments and thoughts to follow: 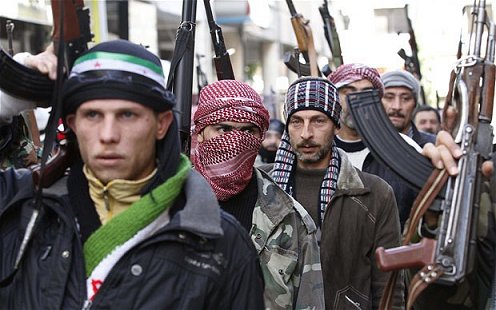 "Rebels"
By Stephen Lendman
June 13, 2012
.
A Syrian documentary aired on June 9, and a June 7 report by Germany’s leading broadsheet provide more evidence. Both refute Western and scoundrel media misinformation. More on the latter below.
.
On May 10, suburban Damascus suicide bombings killed 55 and injured hundreds. The attack happened near Syria’s military intelligence complex. Children were killed. So were drivers and others heading for work.
.
At the time, SANA state media said rescue workers collected “15 bags of limbs and torn-off body parts” from the scene. The blasts also destroyed 105 cars.

Western reports spuriously blamed Assad.
.
He had nothing to do with it, other insurgent massacres, daily attacks, targeted assassinations, and Western-sponsored terrorism.

On June 10, SANA state media’s documentary discussed the Damascus incident. It pointed fingers the right way. It named Western-recruited Jabhet al-Nasra terrorists responsible. They also carried out earlier attacks.
.
Jordanian terrorist Abu Musaab, Syrian Mohammad Ali Ghazi, and an Iraqi called Marwan “supervised the operation.” Others involved included “Mohammad Ahmad Kamaleddin, a Syrian from Serghaya, Yasser, another Syrian, and an Iraqi known as Allawi.”
.
Testimonies were aired. Medical student Abdullah said the Yousef al-Hajer terrorist organization recruited him to participate. He met Iraqi insurgents involved. They were affiliated with Al Qaeda.
.
Abdullah was enlisted to help make explosives. He didn’t know for what purpose. He said Jabhet al-Nasra is active throughout Syria. It works cooperatively with Free Syrian Army elements. Their mission is violence and destruction to destabilize Syria and oust Assad.
.
Recruits were deceived to go along.
.
On air footage also showed al-Qassa’a security camera evidence. “(F)our booby-trapped cars….targeted al-Jamarek, Kafarsousseh, al-Qassa’a and the Criminal Security Department in al-Jamark.”
.
“The documentary showed that the terrorist AbdulSalam Awwad al-Ali al-Hayyawi, nicknamed Abu Omar al-Shami from Deir Ezzor, 23 years old, was the one who carried out al-Midan terrorist bombing using a 30-kg explosive-laden belt on April 27th.”
.
It also “revealed that the explosives used in the terrorist bombings were manufactured at a blacksmith shop in Akraba, owned by the terrorist Said Mahmoud Hamada, 36 years old, nicknamed Abu Salah, who was a senior member of Jabhet al-Nasra. He recruited an Iraqi explosives’ expert called Taha.”
.
On June 7, the Frankfurther Allgemeine Zeitung (FAZ) published an article titled “Again massacres in Syria.” The English translation was choppy. Nonetheless, it pointed fingers the right way.
.
Anti-Assad elements were interviewed. They claimed responsibility. FAZ kept their names confidential. At issue are potential reprisals.
.
It said most Qubeir victims “were of a family. While the rebels accused the regime militias of murder, the state television made a ‘terrorist group’ responsible for the massacre.”
.
It replicated Houla May 25 killings. “(C)redible witnesses” “reconstruct(ed)” events. They refuted Western and Assad opposition element claims.
.
“(I)nsurgents attacked the three roadside inspections of the Syrian army” near Houla. They’re responsible for protecting villages.
.
“Rebels (got a) 300-million-dollar fund.” An “expatriate” Doha-based “businessman” supplied it. “Mustafa Sabbagh, president of the Syrian Business Forum in exile, presented the fund.”
.
“Wael Mirza, Secretary General of the Syrian opposition National Council, said half” the amount was spent “and partly flowed to the Free Syrian Army.”
.
In Houla area fighting, “three villages….were sealed off from the outside world.”

“According to the eyewitnesses to the massacre,” those killed “almost exclusively” were pro-Assad Alawite family members. Several dozen members of one family were slaughtered.

“Killed were also members of the Alawite family Shomaliya and the family of a Sunni member of parliament, because (he) was considered” pro-Assad.
.
The National Review calls itself “America’s most widely read and influential magazine and web site for conservative news, commentary, and opinion.”
.
On June 9, it headlined “Report: Rebels Responsible for Houla Massacre,” saying:

FAZ’s new report blamed Houla killings on “anti-Assad Sunni militants, and the bulk of the victims were members of the Alawi(te) and Shia minorities, which have been largely supportive of Assad.”

“According to monastery sources cited by the Dutch Middle East expert Martin Janssen, armed rebels murdered ‘entire Alawi(te) families’ in the village of Taldo in the Houla region.”
.
In early April, Mother Agnes-Mariam de la Croix warned about rebel atrocities “being repackaged in both Arab and Western media accounts as regime atrocities.”

She cited a Homs massacre. According to a monastery web site account (published in French), “rebels gathered Christian and Alawi(te) hostages in a building in Khalidiya and blew (it up) with dynamite.”
They blamed Assad. Mother Agnes-Mariam said:

“Even though this act has been attributed to regular army forces….the evidence and testimony are irrefutable: It was an operation undertaken by armed groups affiliated with the opposition.”
.
These accounts and other credible evidence point fingers the right way. Western-enlisted death squads bear full responsibility for months of Syrian killings and overall violence. Assad had nothing to do with them. Nonetheless, he’s wrongly blamed.

The “trail of blood leads” to Washington, not Damascus.
.
Ban reports in for orders.
.
His comments sound pre-scripted.
.
Obama speech writers likely wrote them.
.
Dutifully he repeats them.

Like conspiratorial administration officials, he bears direct responsibility for months of Western-instigated violence. He’s equally culpable. He’s guilty of crimes of war and against humanity.
.
How many more will die before bloodshed ends?
.
How great a body count is tolerable?
.
Is Syria in ruins acceptable?
.
Are wars without end defensible?
.
Perhaps nuclear weapons are planned for the next one. 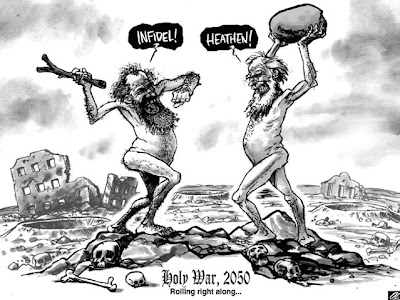 .
Einstein and Bertrand Russell once thought using them was unthinkable. Both forthrightly opposed war. Russell once said:

“Here, then, is the problem which we present to you, stark and dreadful and inescapable: Shall we put an end to the human race, or shall mankind renounce war?”

Einstein put it another way, saying:

Leaders with these views are sorely lacking.
.
America had none in modern times.
.
World peace hangs in the balance.
.
So does human survival.

Stephen Lendman lives in Chicago and can be reached at lendmanstephen@sbcglobal.net. His new book is titled “How Wall Street Fleeces America: Privatized Banking, Government Collusion and Class War”http://www.claritypress.com/Lendman.html


NTS Notes:  Why does this feel like Libya all over again?   I sure hope that everyone can see that we are again being duped by criminals in the United States into falling into the same trap when they called for the removal of Muhammar Gadaffi from power in Libya by committing NATO forces to a "humanitarian mission" there.  And look at how well that "mission" turned out!

Lets not be fooled again... As I have stated in previous articles, we are being played for suckers by the criminals in charge of our governments that are only answering to their Jewish masters and their lust for war.

There is one nation, Russia, that appears to not be fooled at all by the falsehoods of the media.  They are prepared to commit forces to Syria to protect that nation from the lunatics in Tel Aviv and Washington.  The situation there could as a result become absolutely ugly and lead to war against Russia itself.  I doubt very much that the lunatics in Washington are prepared for that scenario...

NTS
Posted by Northerntruthseeker at 10:19 PM

The fact is that the criminal state of Israel along with their slaves in the US Government have long sought to have Assad removed as President of Syria,

“I’m glad that some of the nations in the Gulf, the Saudis, are providing some weapons [to the Syrian opposition]” John McCain. This kind of social depravity is taking a toll on your country in more ways than one. For yourselves and for the rest of the world, we need to force your own regime change and very soon.