A long time ago, I brought forward some interesting information showing that the United States and other criminal governments, were conducting a clandestine operation where they were substituting Gold in Gold bullion bars with Tungsten cores (one article link here).  The fact is that Tungsten itself is almost the same specific gravity and weight as gold itself.  The only difference is that Tungsten is a very hard metal, and is usually detected in fake gold bars by drilling into the bars themselves!

Now comes a new report out of  the United Kingdom, from the website: Silver Doctors, at www.silverdoctors.blogspot.de, where it seems that the gold manipulators have been at it again.  A one kilogram gold bar was broken open to reveal a Tungsten metal core within the bar itself!

First, I have that Silver Doctors report and pictures right here for everyone to see for themselves, and I do have some further comments about this important issue to follow: 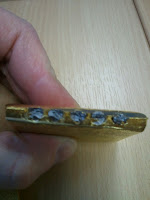 In the biggest news we've broke since the JP Morgan whistle-blower stepped forward,

Australian Bullion Dealer ABC Bullion has contacted SD to advise that one of its suppliers has provided them photographic evidence of a tungsten filled 1 kilo gold bar discovered this week.  The bar passed a hand-held xrf scan which showed 99.98% pure AU.  The tungsten was only discovered when the bar was physically cut in half.
After numerous reports of 400oz tungsten filled bars being discovered in Hong Kong, this is the first documented and verified report with photographic evidence that has been made public.

Attached are photographs of a legitimate Metalor 1000gm Au bar that has been drilled out and filled with Tungsten (W).

This bar was purchased by staff of a scrap dealer in xxxxx, UK yesterday. The bar appeared to be perfect other than the fact that it was 2gms underweight. It was checked by hand-held xrf and showed 99.98% Au. Being Tungsten, it would not be ferro-magnetic. The bar was supplied with the original certificate.

The owner of the business that purchased the bar only became suspicious when he realized the weight discrepancy and had the bar cropped. He estimates between 30-40% of the weight of the bar to be Tungsten. 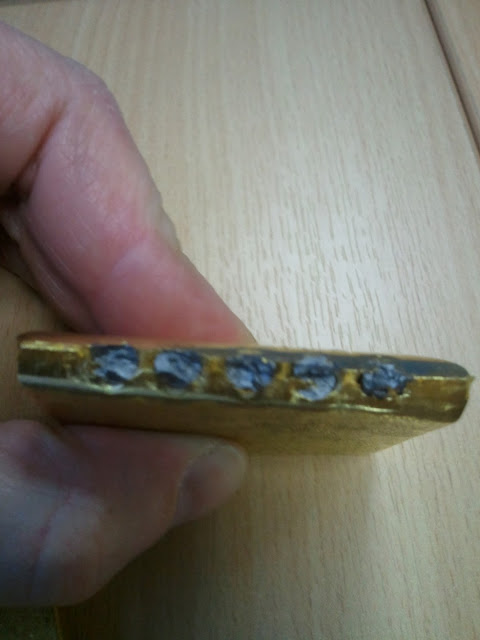 The two halves of the cut bar 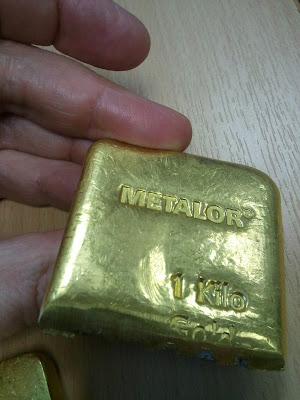 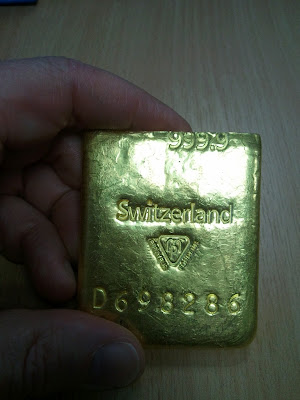 Now that we have confirmed documentation that 1 kilo gold bars have been drilled out and filled with tungsten, look for a rapid scramble to verify the AU contents of 400oz bars which reportedly have also been tainted with tungsten (the market is 'stuffed full' of gold plated tungsten 400oz bars according to Rob Kirby).

For those unfamiliar with the original reports that 60 metric tonnes of 400oz 'good delivery' bars were gutted and filled with tungsten, and swapped with US Treasury gold at Fort Knox in a highly sophisticated plan, an excerpt of his 2009 piece is included below:

This was apparently all highly orchestrated by an extremely well financed criminal operation.
Within mere hours of this scam being identified – Chinese officials had many of the perpetrators in custody.

And here’s what the Chinese allegedly uncovered:

Roughly 15 years ago – during the Clinton Administration [think Robert Rubin, Sir Alan Greenspan and Lawrence Summers] – between 1.3 and 1.5 million 400 oz tungsten blanks were allegedly manufactured by a very high-end, sophisticated refiner in the USA [more than 16 Thousand metric tonnes].  Subsequently, 640,000 of these tungsten blanks received their gold plating and WERE shipped to Ft. Knox and remain there to this day.  I know folks who have copies of the original shipping docs with dates and exact weights of “tungsten” bars shipped to Ft. Knox.

The balance of this 1.3 million – 1.5 million 400 oz tungsten cache was also plated and then allegedly “sold” into the international market.

Makes one wonder if the Indians were smart enough to assay their 200 tonne haul from the IMF?
Read the rest of Rob Kirby's 2009 Tungsten Filled Fake Gold Bars Warning here:

NTS Notes:  This is a very serious issue that everyone should be brought up to speed about immediately.   The fact is that with Gold being traded on the world markets at about $1750 American per troy ounce right now,  any physical bullion is now suspect of being a fake!

I have long stated that there is almost NO Gold bullion in America right now.  Most of it was taken out of the gold bullion storage facility at Fort Knox Kentucky years ago, and the New York Mercantile bank has little if no gold bullion in storage at all.   So we must ask ourselves... Where is all the physical gold???

I and others have said that the real physical Gold bullion is resting in Rothschild controlled bank vaults in Europe right now.  These Jewish criminals, who want world domination, have been pushing for the return to a "Gold Standard" for world currencies to back any paper money in circulation.   Of course they want a Gold Standard, because they would be in control of all the real physical Gold!

These criminals have spent the last few decades substituting much of the so called physical Gold bullion that is still in circulation around the world with bars filled almost worthless Tungsten cores and only a small amount of real Gold as the casing to give the illusion of being pure physical Gold.   These newly discovered Tungsten core Gold Bars again show this as fact.


Posted by Northerntruthseeker at 9:20 AM

I think I must have been in Denver when I wrote that...and surely you mean "any money they loose", other than that you seem to have a pretty good understanding of how it all works.