I have long shown that the situation at Fukushima Japan, with the meltdown of at least 3, and most probably 4 reactors, is far worse than what the Japanese Government, and the controlled media has been stating.   It is now a full year since that disaster took place, and the failed reactors are still spewing out deadly radiation, with no hope in the near future of being brought under control.

We always knew it would only be a matter of time before we start seeing reports of people dying by radioactive contamination from this disaster... And it does appear that from this new article, from Alexander Higgins' blog, at www.blog.alexanderhiggins.com, that a Japanese celebrity, Yamaguchi Tatsuya, a recent winner of the Japanese version of American Idol, may now be dying from eating radioactive contaminated food from the Fukushima area!

First, I want to present the Alexander Higgins article for everyone to see for themselves right here, and I do have some of my own comments to follow:

Whether he was doing it out of stark patriotism, being a man willing to die for his country, or the shear stupidity of believing that his government was telling him the truth the days of Japanese Idol star Yamaguchi Tatsuya, a member of the group TOKIO, are now numbered.
He has been seen all over Japanese Television pushing the Fukushima “Support by eating” government propaganda campaign meant to bolster the region’s economy by showing the rest of the nation the food is safe to eat by having government officials of mega stars show they are eating the food and are safe.
Right about now he is probably wishing he hadn’t done that after a whole body counter test measured 20.47 Bq/Kg of cesium 137 radiation in his body.
The isotope of cesium has a 30 year half-life and is known to accumulate in the bones of the bodies it enters so we’ll keep a watch to see just how long it take before he develops some form of cancer that does him in.
I know that my sound entirely cruel and diabolical but you need to realize that the media and stars who do things like this are essentially complicit in committing the worst case of mass murder in the entire history of humanity.
The blame for millions of people who will eventually get cancer and a great portion of those who will die from it lies largely on their shoulders.
No, it is not their fault that the nuclear meltdown occurred and spewed radioactive fallout all over Japan – and in fact the entire world – while destroying a good portion of the Pacific as food supply.
However, it is their fault for helping to carry out the greatest deception ever by deceiving the masses who trust them into believing the emperor is wearing clothes.
Fukushima Diary reports:

Japanese idol on “Support by eating” positive from WBC

Following up this article..Japan Food campaign is operated by Dentsu.inc
Yamaguchi Tatsuya, a Japanese idol had a brief whole body counter check and had 20.47 Bq/Kg of cesium 137 measured.
His TV show, The Dash village broadcast he had a brief whole body counter check at Beraldo radiation institute.
In this TV show, they were developing a village called Dash in Namie machi, so they are supposed to be stakeholders of Fukushima.
He is a member of a Japanese idol group called TOKIO. They are on the TV commercial to propaganda “Support by eating”.
According to the study of Dr.Yury Bandazhevsky, the first chairman of Homyel medical college, more than 60% of infant, who had 11 ~ 26Bq/kg of cesium measured , showed abnormal electrocardiogram after Chernobyl.
Additionally, Yamamoto Taro, an anti-nuclear activist / actor had 9.5 Bq/Kg of cesium measured. 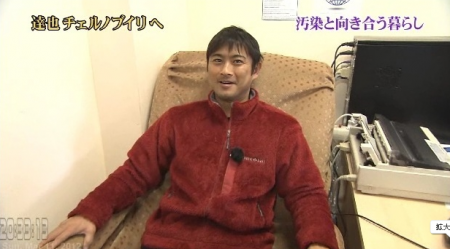 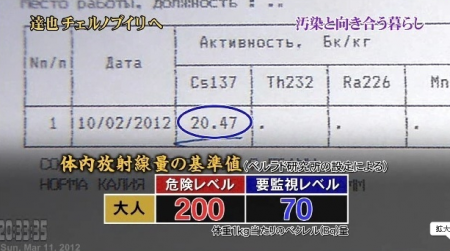 Keep up on the latest Fukushima news at The Fukushima Diary


NTS Notes:  OK, I will say it... This is absolutely horrendous.  I truly suspect that this young man seriously believed all the government reports that the food from Fukushima was safe to consume.  Now he will be paying the ultimate price by probably dying for believing the lies that his own government promotes!

This again shows how badly people need to be made aware of the truth about Fukushima, and the wide spread radioactive fallout from that disaster.   We here in North America have been subjected to almost an entire year of high levels of radiation from radioactive fallout, and much of that fallout is being also absorbed into our bodies from the foods we eat here!  But do we see any reports or warnings from our own governments about dangers from our own food?  Absolutely not!

As I stated before, this disaster is far from over.  We will definitely see more reports of people getting sick and actually dying due to radiation poisoning from this disaster.   Maybe only then will people actually begin to question the "official" story promoted by the liars in our governments and our media...

NTS
Posted by Northerntruthseeker at 9:46 PM