The Fukushima Nuclear Disaster: Japan Being Pushed Into Revolt Over Fukushima Radiation

First, I must say that I am much better today than I have been over the last few days.. The unusual weather we are all experiencing in North America has been playing havoc with my sinuses.

I have been observing the reports over the last few days about new concerns about reactor#2 at Fukushima.  There are startling and shocking reports that show that that water that was poured into the failed reactor core has somehow leaked away into the environment, and there is now less than 60cm of water covering the failed core material itself (see report here). It is shocking to again see that all of the media reports about the ongoing disaster there are nothing but LIES!

Now comes even a more important report, from Alexander Higgins Blog, at www.alexanderhiggins.com, entitled: "Japan Being Pushed Into Revolt Over Fukushima Radiation".   In this report, that I have for everyone to see for themselves, you will see that the people of Japan have finally had enough of being lied to by their government and media, and revolution is a definite possibility!   I do have my usual additional comments to follow:


Japan Being Pushed Into Revolt Over Fukushima Radiation

Japanese citizens are left with no further possible recourse beside a revolt to end the gross human rights abuses being committed by the government of Japan.

The Japanese are finally noticing that they are surrounded by the invisible walls.

Since the bubble ended in 1992, Japan has been in a long recession, called Japan’s lost 20 years.
Leaders changed like revolving lantern.

Japanese citizens became aware that their voice is not reflected in the political situation but they tried to ignore the fact and indulged themselves in the fading prosperity.

Japan Security Watch - Tens of thousands of protesters pack a park during the anti-nuclear demonstration in Tokyo.

However, they cannot ignore it anymore.

Since 311, their government has been trying to kill the people instead of saving them.

They have concealed SPEEDI which showed where people should be evacuated from and instead are having people remain in hotspots.

The government has engaged in a campaign to cover up the information about the nuclear radioactive fallout having set the food regulations to save the producers instead of the consumers.

In a futile attempt to protect their own lives and the lives of their children the Japanese have put forth countless petitions, demonstrations, and discussions but none of them have been effective.

The Japanese have not felt the necessity of revolt this much since the last Japanese revolution in the mid 19th century.

Japanese citizens are finally starting to become aware that they have been quiet for too long.
They are trying to recall how to stand up against the power.

A man in the chain asked the police if the anti-nuke movement is getting slow.

The Police whispered “It’s not getting slow”.

They think it was a remarkable achievement to have even made it into 2012 without any violent clashes.
The police don’t think it is going to stay this way for too much longer.

Instead, they think it’s rather to become much more “active” because the people are more and more aware that the mass media is busy at manipulating information.

NHK is censored from projecting a pro-nuke or anti-nuke viewpoint.

The world has changed.

However, the fact is that the consensus of the people cannot affect the political decisions of the government.

Massive Anti-Nuclear Protests Ignored For Over A Year

On 3/11/2012, Japanese Prime Minister Noda gave a speech urging all of Japan to help with the disposal of radioactive debris by accepting it for disposal.

It is assumed now that the radioactive debris will be spread all over Japan and even to Okinawa by April.

There are even an unconfirmed reports that they radioactive debris has already been taken their and buried in landfills.

People in Okinawa are now starting to complain they are becoming sick as a result, complaining of nosebleeds and sore throats.

Utter ignorance of public officials keeps the situation growing worse regardless of the petitions and enlightening movement of the citizens.

In Okinawa, there are approximately 10,000 people evacuated from the main islands of Japan.
For them, Okinawa is the last radiation haven.

At the end of World War 2, Okinawa was the last battle field between Japan and US.

At this moment, it’s highly likely that citizens will fail.

Contaminated food is still served at school lunch and being sold on the shelves of the supermarkets.

Decontamination is becoming a profit making business that only done when it is beneficial for the government and regardless of the safety of the people.

It is a concrete fact that people can no longer any recourse to change the situation legally.

Japanese have been educated to think expressing your own opinion is rude.

Now they are trying to learn how to speak out drawing from the experience of citizens overseas in locations such as Tibet, Tunisia, Egypt and Greece.

The citizens of Japan are becoming more emotional and are ignoring that their protests have failed to make a difference.

Everyday new ideas to force change appear on Japan’s social networking sites such as hunger strike, human chain, direct appeal, use of force and even assassination. 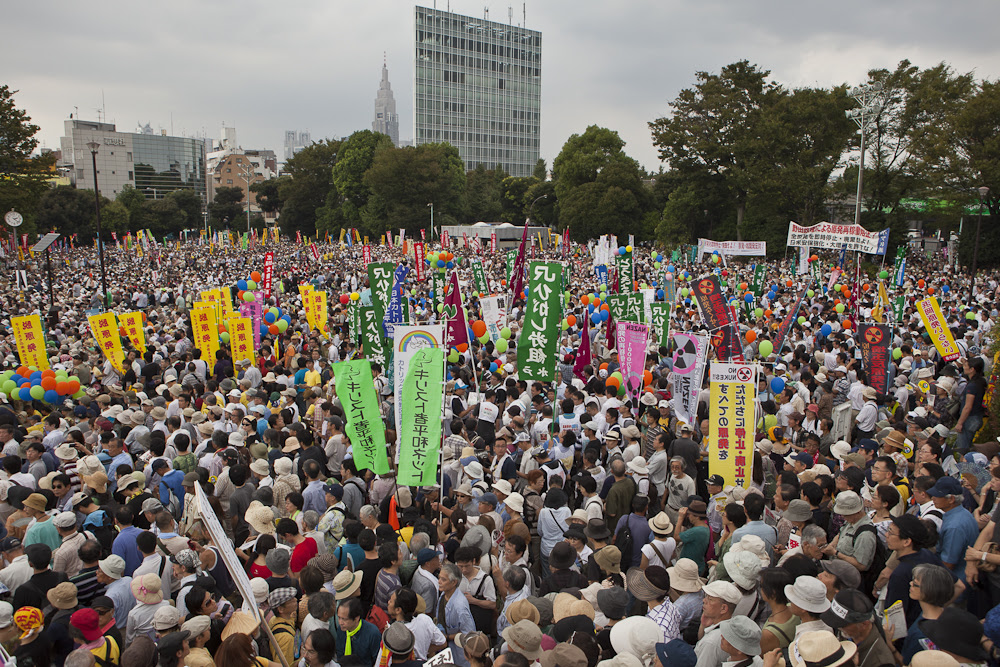 Japan experiencing a massive awakening of the public about Fukushima radiation

The authorities have made a police box in front of the house of Mr. Katsumata, the chairman of Tepco.

It is a clear sign that they are feeling the threat of people.

Because people can’t do anything for Fukushima anymore, they are focusing their attention on alternative issues.

1. Attempt to stop all the nuclear plants in Japan.
2. Measuring radiation all around in their circumstances and food.
3. Acting against the policy to spread the radioactive debris.
4. Revealing the manipulated facts about the decontamination business.
etc..

Soon the people will be united and lose their focus on these distractions and to turn to violence.

The more aware people become the harder the government becomes. 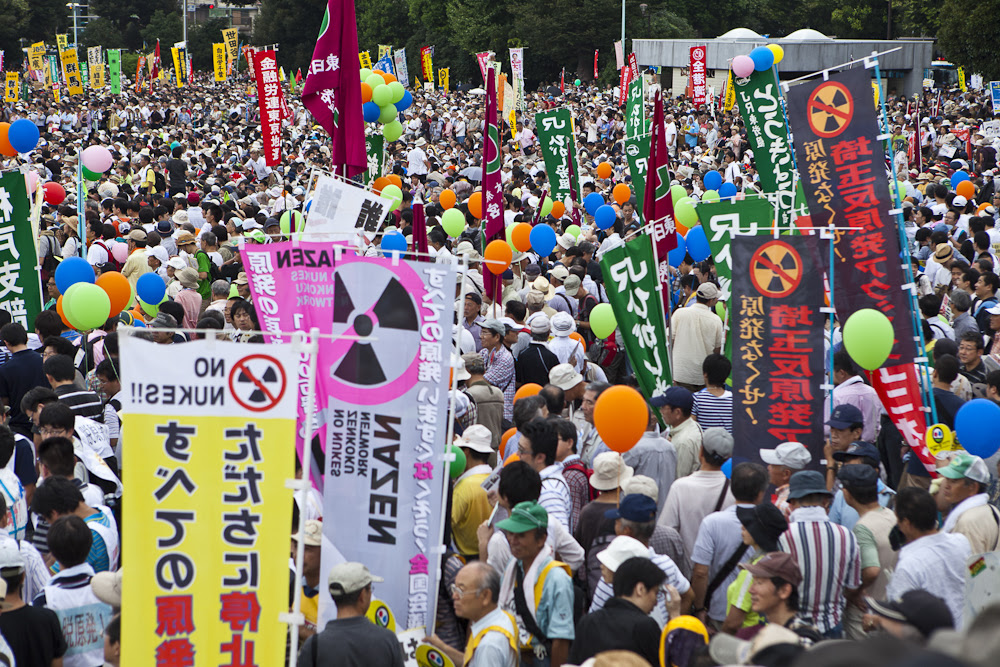 Massive anti-nuclear protests in Japan are not making any difference

Editor’s note: The original version of this article appeared on the Fukushima Diary. It has been updated here and minimally editorialized to convey points lost in translation as English is a second language for original article’s author. I have also added photos and video to put the article into context.

NTS Notes:  I have only one real question for the proud people of Japan:  "What took you so long?".

Seriously, I cannot believe how patient the people of Japan have been with their own government and the criminals at TEPCO over the deadly situation at Fukushima.

The problems at Fukushima are definitely not going away any time soon.  The fact is that Japan itself is now becoming a radioactive wasteland and the poor people there have no where to run.   Many have somehow accepted their fate, while others are now seething with the urgency to get both the truth out and demand that their own officials finally come clean about the reality of the situation and at least give the people some ideas about how to survive!

This disaster is definitely far from over, and we may yet see that China Syndrome situation occur with the failing Reactor #2 situation.  I will do my best to keep up with this situation and keep everyone informed... Stay tuned...

NTS
Posted by Northerntruthseeker at 8:45 AM