The American puppet regime of Israel sitting in Washington DC, and the Jewish controlled media, has constantly said for years that the United States gives only around 3 Billion dollars in aid annually to the criminal and terrorist state of Israel.   For the longest time, I and others have thought that amount to be a bit too low, and that the actual figure may be around 10 billion dollars, if you consider all government and private donations... So what is the real amount of money that these criminals suck out of the dying United States?

To answer that question, I want to present the following article that comes from The Guardian online news service out of the United Kingdom, at www.guardian.co.uk, where the recent member of Parliament, Liberal Democrat Jenny Tonge, lets slip the REAL amount that the United States has been handing out annually to the criminal state of Israel for all these years!  I have that article right here, with the interesting fact highlighted, for everyone to view... Be ready for a shock:

Party leader urged to condemn Lady Tonge, who said Israel would 'lose support and then they will reap what they have sown' 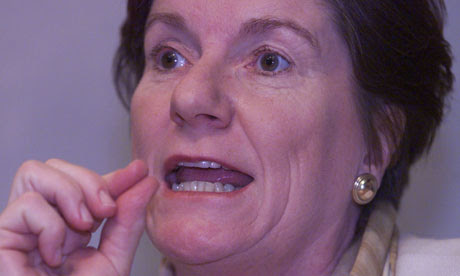 Jenny Tonge said Israel would ‘lose support and then they will reap what they have sown’ Photograph: Martin Argles for the Guardian
A Liberal Democrat peer has said Israel will not last for ever, with her remarks prompting calls for the party's leader, Nick Clegg, to take disciplinary action.
Lady Tonge, who was sacked as the Lib Dem children's spokeswoman in the Commons in 2004 when she suggested she could consider becoming a suicide bomber, made her remarks in a meeting at Middlesex University.
"Beware Israel," she said. "Israel is not going to be there for ever in its present form. One day, the United States of America will get sick of giving £70bn a year to Israel to support what I call America's aircraft carrier in the Middle East – that is Israel. One day, the American people are going to say to the Israel lobby in the USA: enough is enough."
She added: "Israel will lose support and then they will reap what they have sown."
The Liberal Democrat leadership criticised Tonge for the remarks but stopped short of calling on her to withdraw her comments. A spokesman said: "Jenny Tonge does not speak for the party on Israel and Palestine. Her presence and comments at this event were extremely ill-advised and ill-judged. The tone of the debate at this event was wholly unacceptable and adds nothing to the peace process. The Liberal Democrats are wholehearted supporters of a peaceful two state solution to the Israel- Palestine issue."
Ian Austin, a former Labour minister, said: "There is a cross-party consensus that a two-state solution is the only way to bring peace to the Middle East. At the very least, Nick Clegg must make Baroness Tonge withdraw these remarks."
Tonge's remarks were made last week and disclosed on the Guido Fawkes website.
The Liberal Democrat Friends of Israel group dismissed Tonge as an "irrelevant, siren and marginal voice" and called on her to resign the party whip.
Gavin Stollar, chairman of the group, said: "LDFI strongly condemns Baroness Tonge's latest outburst not only because it is wrong but because it is contrary to Lib Dem party policy. Jenny Tonge is an irrelevant, siren and marginal voice in the Liberal Democrat party and we call on her to resign the Lib Dem whip.
"If she truly believes the things she says, how can she justify being a member of a party whose policies are diametrically opposed to her views on Israel and the Middle East, a subject on which she talks on almost a daily basis?"
John Woodcock, the chairman of Labour Friends of Israel, said: ""This is the latest in a series of outrageous remarks from Baroness Tonge - words of excuse or apology in response are no longer enough. Nick Clegg needs to take disciplinary action against his offensive peer to reassure people the government remains serious about a two-state solution."


NTS Notes:  The crux of the argument by Nick Clegg is absolutely wrong.. NO nation lasts forever!  That is fact, and for this guy to fire this British MP for that is absolutely ludicrous... So the reason for her firing stems from obviously something else that she said....

I would not doubt for one second that the reason why Tonge was fired from the Liberal Democratic party and dismissed from the British Parliament is for revealing to everyone the true amount of money that their American slaves hand out to their masters annually!   So much for their lying laughable claim that Israel gets only 3 Billion dollars annually!

Recently, the ultra criminal insane leader of Israel, Netanyahu, put out a boastful claim that Israel is one of the most advanced nations economically and technologically on Earth... It is no wonder, if their American slaves are giving 112 BILLION DOLLARS annually to that criminal enterprise, while Americans are now unemployed and living in the streets of the once great United States.

And where again is the American public in all this?   With all the brainwashing from their Talmud-Vision, and their chemicalized diets,  many do not notice, and do not care, while their own nation crumbles before their very eyes...

NTS
Posted by Northerntruthseeker at 10:26 PM

ISRAEL ON ROAD TO EXTINCTION!

This is not the first time the CIA has said such things. I cannot find the post I put up to this effect (with great glee a few years ago).

This Tonge should not be penalized for stating the obvious... but we know that somehow she shall.