When the massacre in Norway occurred back on July 22nd of this year, the first thoughts that crossed my mind was that the massacre had all the earmarks of being a Mossad operation.  The articles that I posted at that time pointed the finger directly at Israeli involvement in the brutal murder of 69 Norwegian students from the word go.... I have to this date not swayed from that being my opinion and have found very little information that has ever changed that opinion...

For this article, I want to "borrow" an article that I just came across from my friend, Noor, who writes the website: Snippits and Snappits, at www.snippits-and-slappits.blogspot.com, entitled: "Swedish Professor Links Israel To Norway Massacre".    I have that entire article right here, and of course some of my own comments to follow: 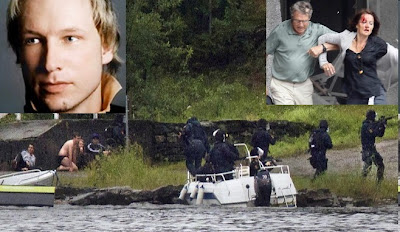 Ola Tunander suggests Israel behind bloody terror attacks committed by Norwegian Anders Behring Breivik in July, stirring up controversy in Oslo
From News that Matters: This is the claim from senior political scientist  Ola Tunander in PRIFO. (Peace Research Institute of Oslo).

In a long political analysis published in idunn.no, he accuses pro-Israel forces to be the inspiration of Utøya-terrorist Anders Behring Breivik.


”When Anders Behring Breivik was arrested and we were able to look at his video and read his manifesto, it became clear that he was inspired by Jewish-Christian anti-jihadist writers”, claims Tunander.

"Some critics argued that Breivik had been used by Israeli forces with an interest in changing Norway’s policy towards Palestine, as if Breivik had copied the Israeli bombing of the British headquarters in Jerusalem in 1946, on the very anniversary of that attack”.

A Swedish professor suggested Israel was behind the bloody terror attacks committed by Norwegian terrorist Anders Behring Breivik this past July, stirring up controversy in the country.

According to Tunander, it is possible that some country was behind the terror attacks, hinting that Israel might be that country.

Far right extremist Breivik, 32, had previously confessed to the Oslo bombing, which killed eight people, and to the youth camp massacre which killed 69 at the small island of Utoeya northwest of Oslo earlier in July.

In December the confessed killer disputed an expert conclusion that he is criminally insane. His lawyer was quoted as saying: "We have examined a good part of the report that details the conversations he had with the psychologists."

Breivik "reacted by saying that it contained factual errors (and) lies and that his statements were taken out of context," his lawyer added.

Tunander claimed that in order to carry out a terror attack of such magnitude the involvement of state forces is needed, “and we can’t rule out that being the case this time too,” he wrote.

While quoting the controversial article, the Swedish news site The Local presented the professor's theory. Tunander mentioned the political tensions between Oslo and Jerusalem in the months prior to the terror attacks in light of Norway's intent to recognize a Palestinian state.

He goes on to link between July 22, the date of Breivik's killing spree, and the significance of that date in Israel's history.

Tunander brings up the Lillehammer affair of 1973, when Mossad agents accidentally killed a Moroccan waiter in the Norwegian city believing he was Ali Hassan Salameh, the chief of operations for the 1972 Munich massacre of Israeli athletes. One of the agents was arrested the day after the murder, on July 22nd.

The Norwegian professor also discussed the bombing at the King David Hotel in Jerusalem carried out by the Irgun on July 22, 1946.

“We have discussed the right-wing extremist Israeli and Judeo-Christian side of Breivik’s network, Israel’s interest in disciplining Norway, and Israel’s celebration of bomb attacks. In this respect, Breivik’s attack appears to resemble a new king David Hotel attack: July 22nd,” he said.

PRIO director Kristian Berg Harpviken told Norwegian magazine Minerva that Tunander's article left him with a feeling of “considerable unease.” Harpviken added that it was a wrong call on behalf of the Nytt Norsk Tidsskrift to publish it.

Tunander said that it was unfair to conclude from his article about any intention to link between Israel and the most murderous event in Norway's history since World War II.

ED: Needless to say, the Comment section on this article in YNet is just abuzz with anger!

Just a very silly but funny and totally irrelevant comment:

Breivik has six letters in it.

Laughs. The possibilities are endless.....


NTS Notes:  I fully agree with this Swedish professor's assertions, due to the fact that little news is discussed about Breivik's "handler" Isak Nygren, who was the Swedish Jewish man (Mossad?) who actually was in contact with Breivik just minutes before Breivik launched his "attack" in Oslo.  It is also a fact that this mysterious Jewish man, Nygren, quickly got on a plane in Sweden and high tailed it to Israel to prevent his capture due to his possible connections to the massacre coming to light.

The part played by this Isak Nygren in the Breivik Massacre is exposed in my previous article with the link here:

It is also a fact that Breivik did not act alone, and possibly was not even one of the shooters in the massacre.. As shown in previous articles on this matter, it seems that there was a hit team that got to Utoya island to do the mass murder, and was able to escape before the police arrived to find Breivik, who was most certainly the patsy in this entire escapade, quickly giving himself up and subsequently charged with being the "Lone Gunman" in this entire sad episode.

Therefore, as far as I am concerned, this Swedish Professor is absolutely correct in his assertion that Israel, through its criminal Mossad, was indeed directly involved in the Breivik Massacre in Norway.   It may still take time, but eventually everyone with any common sense will come to the same conclusion.


Posted by Northerntruthseeker at 10:23 PM

FYI
interesting site with good video to understand how America and Canada, and Western civilization got in such a mess

It certainly all stinks, doesn't it. But with so much fecal matter floating around these days it is getting harder and harder to sniff out the specifics....

The Swedish professor isn't the only one with this view, judging from the articles I've read about it on the net - this, for one:

which also picks up the forgotten point about the 'missing policeman' who should have been on the island at the time, and what might have happened to him.

If Breivik stands trial, all kinds of nastiness is likely to creep out of the woodwork. Not only that, but he would be sentenced to at most 22 in gaol. By declaring him 'insane', he can be kept in confinement indefinitely.

I suspect, though, that something is likely to 'happen' to him while he is out of the public eye, sometime in the not too distant future.