For the longest time, I and others in the real so called truth movement have been almost begging people to avoid vaccinations at all cost.  These so called "vaccines" contain a vast myriad of poisons that actually weaken the immune system rather than boost it.    The major culprit in any vaccine is Mercury, a known poison which causes a multitude of neurological disorders including autism.  It is amazing to see how gullible people still are that they listen to the criminal media outlets and obediently line up, roll up their sleeves, and take this deadly poison willingly into their bodies!

Now come a truly shocking report that has just come forward from the website, Activist Post, at www.activistpost.com.  According to this new report, the criminal government in Australia is actually considering withholding any Family Child Tax Benefits, unless they comply and have their children take their prescribed vaccinations!   This is absolutely criminal, and outright extortion.... First here is that Activist Post article, and I do indeed have some comments to follow: 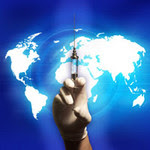 Earlier this week, I wrote an article dealing with Australia’s introduction of fingerprint scanners into various workplaces for the purposes of keeping track of employees’ attendance and performance.  The finger scanning program is being introduced by several large companies and will require employees to turn over some of their most private data when they clock in or out at the job and when they take breaks. It will also be used as a general method of keeping track of each employee’s level of production.

In describing this program in the article, I suggested that although the United States and Britain are often seen as world leaders of the introduction of the Big Brother Police State, Australia is often unfairly overlooked in this regard. However, it appears that the Queen-linked nation is fast asserting itself as a legitimate contender for the crowning title of “police state.”

Although the program is being administered by the private sector, it is no doubt a test run for further implementation into the society as a whole. In this case, however, one of the latest freedom-crushing programs to be rolled out in Australia is being introduced not by the incremental approach of the private sector, but by the force of “law” and “policy” of government.

In a new plan announced by the Australian Government, parents who do not subject their children to toxic vaccinations will be stripped of their family tax benefits, a scheme which could end up costing parents up to $2,100 per child, according to a report by ABC News.

In order for families to receive the Family Tax Benefit (FTB), and end of the year tax supplement, they will have to show proof of their child’s vaccination at yearly “immunization” checks. These checks will be conducted starting at the first year of life for every child.

In Australia, families must already show proof of full compliance with vaccination “requirements” in order to receive the Child Care Benefit and the Child Care Rebate.

At this time, Australia still has an opt-out clause for families deemed “conscientious objectors” who, even though they refuse the vaccination for religious, health, of philosophical reasons, will still be able to receive the FTB yearly credits.

In order for a family to opt out, however, one must sign an “Immunisation Exemption Conscientious Objection Form,” which must be signed by the parents and filled out by a medical doctor or a vaccine administrator.

For all of the Australian parents reading this article, the exemption form can be found at the link above in pdf form and printed out for your convenience. Or you can just click here to access it.

Regardless, the fact is that forcing parents to add themselves to a government list of families who object to vaccination, and then forcing them to have the exemption form filled out by a doctor or vaccination provider, is simply unreasonable. Families who are acting well within their rights are now forced to jump through an extra set of hoops just to be treated the same as other families who have made a different decision. This, in and of itself, is a clear sign of discrimination.

Not only that, but the individuals in charge of making such policy changes know full well that forcing a family to consult a “vaccine provider” or medical doctor amounts to intimidation at the hands of the healthcare establishment.

Medical doctors are generally so fully indoctrinated by the drug companies they were educated by that they rarely muster up enough courage or common sense to question the sacred cow of vaccines within the medical establishment.

When doctors are questioned by patients as to the safety of vaccination they almost always respond with the same lines of propaganda that we have been hearing for years about side effects being extremely rare and the people who question vaccines being “crazy conspiracy theorists.”

When they are confronted with someone who openly opposes the practices of vaccination, they often respond with irritation, frustration, anger, and intimidation tactics. In many cases, they simply lie.

The Australian establishment is well aware of this and, quite obviously, it is one of the reasons for such a requirement. They know that requiring parents to have a medical “professional” sign off on these forms will result in a large portion of these families being fooled, pressured, or otherwise intimidated into vaccinating their child.

In addition, the withholding of tax benefits for families who have not vaccinated their children amounts to nothing more than a backdoor tax increase for them. Although it is never openly discussed in this manner, removing tax benefits that everyone else receives is clearly a form of financial coercion.

But this is not the only policy change being made by the Australian health system regarding vaccines. Australia is now requiring that children be vaccinated with the highly dangerous MMR shot at the age of 18 months, instead of the currently mandated age of four years. Not only that, but it is the combination vaccine that is being required rather than the individual doses.

The combination MMR shot has been documented by numerous researchers for many years as having been linked to serious adverse effects, especially to autism (See here and here) and inflammatory bowel diseases (See here as well). Vaccines themselves are dangerous enough when administered separately. However, the combination shots are even more dangerous because of the varying toxic ingredients, as well as the mix of viruses and contaminants.

Mandatory or required vaccination is illegal, dangerous, and non-productive in the first place, and there is no logical reason for vaccination to be compulsory, since vaccinated children are presumably never at risk from the unvaccinated if they have the "protection." But for a government to require the combination vaccine is even more ludicrous, given the side effects it has been so well-documented to produce.

What we are witnessing is a clear case of government extortion in regards to a parent’s God-given natural right to vaccinate or not vaccinate their children.

Unfortunately, it will also only be a matter of time before such government policies are enacted in the United States, especially as we see some of them already beginning to take shape.
Brandon Turbeville is an author out of Mullins, South Carolina. He has a Bachelor’s Degree from Francis Marion University where he earned the Pee Dee Electric Scholar’s Award as an undergraduate. He has had numerous articles published dealing with a wide variety of subjects including health, economics, and civil liberties. He also the author of Codex Alimentarius - The End of Health Freedom, 7 Real Conspiracies and Five Sense Solutions.

NTS Notes:  After first reading this report, I thought this had to be a joke... I had to read it again to try to make sense of this outrageous action.    How in the hell can the people of Australia accept this act of pure extortion from their own government?   And why there is little outcry from the Australian people is beyond me...

I do not have that many readers in Australia.. Yet... But for those who are reading this article, I sure hope that you take this information and inform everyone around you that your own government is actually considering this heinous act to force you to be poisoned!

And for those who think that this is isolated to Australia, think again...I guarantee that our governments here in North America and in Europe may use this action in Australia as a springboard for bringing in this type of sick legislation here.....

Many thanks to the Activist Post for bringing this information forward... I sure hope that everyone will be on the alert because this criminal action may be coming soon to a neighborhood near you!

NTS
Posted by Northerntruthseeker at 9:30 AM