Very soon, the sale of safe and dependable incandescent light bulbs will end in the United States of America.   Very few people in America are even aware of the fact that their federal government passed a bill a few years back that would have made the sale of incandescent light bulbs illegal starting on January 1st, 2012.  Thankfully, this newest legislation has been successfully delayed...But the fact is that the US Government is bound and determined to make the use of safe incandescent bulbs illegal in America very soon!

Many people are still unaware of the dangers of the much hyped replacement of safe and proven  incandescent light bulbs, which are the mercury filled  Compact Fluorescent Lamps.. (CFL for short)...

These CFL devices were originally heralded as the future of light bulbs, because they were thought to be safe and use less electricity than incandescent bulbs.  However,  the light that these devices produce has already been found to make many people sick, and if one of these bulbs breaks by accident, then good luck to you... A hazardous material team will be required to remove the deadly mercury from the environment which can cost the consumer thousands of dollars!  Another factor is that these devices were originally said to have a longer life than incandescent bulbs, but purchasers of CFL bulbs have soon found out that they absolutely do not last nearly as long!

Those are only a few of the hazards of CFL bulbs.   I want to present the following article, from the Mail Online news service out of the United Kingdom, at www.dailymail.co.uk, entitled: "Fire Hazard Fears Over Compact Fluorescent Lamps - After They've Stopped Working", which shows a newly discovered, and very deadly consequence, of the usage of these dangerous devices.. I have that entire article for my own readers to view, and I do have some more comments to follow:


Compact fluorescent lamps, which will gradually replace traditional incandescent bulbs, are a fire hazard that could burn down your home, experts have warned.

The lamps (CFLs) use electricity to heat an element in the lamp’s base that leads the mercury vapor gas in the coils to emit light.

But when a CFL can no longer produce light, the electronics in its base will still try to function, sometimes leading to overheating, smoke and fire. 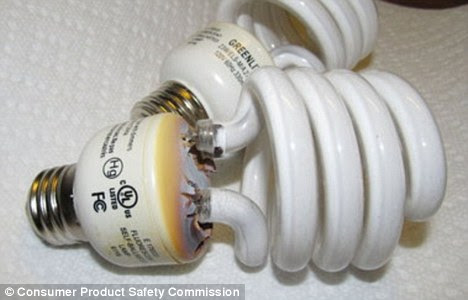 Safety concerns: There have been reports of smoke coming from the bases of compact fluorescent lamps that are no longer working

Fires from the old incandescent bulbs, on the other hand, are virtually nonexistent, masslive.com reports.

The bulb ends its life when the wire filament, which produces light when electricity passes through it, burns out and breaks.

CFLs have been touted as the bulb of the future because it uses about a fifth of the power than a regular bulb and have a life six to 10 times as great.

Traditional bulbs will gradually be phased out in the coming years.

So far there have been 34 complaints about CFLs emitting smoke or a burning odour and four reports of one actually catching fire.

'I'm not aware of any fires that fire departments in the state have responded to that were started by CFLs, but, as a consumer, it’s a good idea to be vigilant.'

In 2009, standards were revised for materials used in the plastic housing of the base of CFLs sold in North America. But millions are still in use that were produced before the change.

NTS Notes:  In the sick pursuit of a "Greener" world, the proponents of these CFL bulbs have failed to look more closely at the consequences of using these devices...

So now we have the following list of problems with CFL devices:

(1) Light from these devices makes many people sick.


(2) EMF radiation from these devices has many health hazards for the users, some are still unknown.


(3) Mercury vapour in these devices is deadly to human health, known to cause a wide variety of neurological disorders.


(4) Accidental breakage of these devices will set back the user thousands of dollars for cleanup, due to the release of deadly mercury vapour into a home.


(5) They do not last nearly as long as safer and proven incandescent bulbs even though constantly touted as doing so!

and we can add the following to that list:

(6) When the CFL device burns out... They can become a severe fire hazard!

As far as I am concerned.. I have seen enough to understand that personally I will in absolutely no shape or form ever purchase these devices for my own home!

Again, I must ask... When will the people here in North America go to their government representatives and halt the impending legislations to have these dangerous devices replace safe incandescent bulbs?   That time is NOW!!!!

NTS
Posted by Northerntruthseeker at 4:46 PM

I've been reading a lot of issues about CFLs and the danger it may bring. I don't know if I already need to change my bulbs at home. All of my bulbs are CFLs. My contractor who took his Electrician Online Course said that LED is much better to use.

Yes, LED lights are much safer.. However, it does appear that many toxic chemicals are produced as a byproduct of LED production....

We cannot win either way... I still say that the tried and true Incandescents are still the best way to go, until LED technology is further refined to cut down on its toxic waste byproducts!

Regarding why ban on incandescents is wrong, and hardly saves energy...