In my last article, I rightfully called US Congressmen and Congresswomen "Congress critters" because they have again shown to be nothing more than snivelling cowards and slaves to their first love, the criminal state of Israel.   From their actions in giving the criminal Prime Minister of Israel, Benjamin Netanyahu, 29 standing ovations and a multitude of cheers back when he spoke in front of them in May, 2011, my long standing opinion of them has become fact.

Now with the pending sailing of the newest Humanitarian aid flotilla to Gaza, we have further proof that these Congress critters are nothing but obedient slaves to Israel and traitors to America.   It seems, according to this article that comes courtesy of the Ugly Truth website, at www.theuglytruth.wordpress.com,  one Israeli slave in the US Congress is actually calling for a joint American-Israeli military operation to stop this aid flotilla in international waters!   Here is that article:

Posted: June 30, 2011 by crescentandcross in Uncategorized 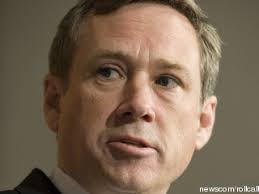 A U.S. senator wants U.S. special operations forces to help Israel halt a Gaza-bound international aid flotilla that includes a vessel carrying a number of American veterans, one of whom is a Sailor who served aboard the USS Liberty, the ship that Israel infamously attacked in 1967.
In a report drafted following a visit to Israel in early June, Sen. Mark Kirk, R-Ill., says the United States should “make available all necessary special operations and naval support to the Israeli Navy to effectively disable flotilla vessels before they can pose a threat to Israeli coastal security or put Israeli lives at risk.”
The U.S.-flagged ship, called “The Audacity of Hope” — the name of President Obama’s 2006 book — is currently docked in Greece and is supposed to set sail by the end of this week along with ships from Ireland, Spain, Italy, Greece and other countries. More than 30 Americans are booked for passage on the Audacity of Hope.
While Kirk is pushing for a direct U.S. military role in halting the flotilla, six Democratic congressmen want assurances from Secretary of State Hillary Clinton that she will work with Israel to ensure those aboard the American ship are not harmed.
The lawmakers, including ranking House Veterans Affairs Committee member Rob Filner, D-Calif., say they “wholeheartedly support” Israel’s duty to protect its citizens, but the “measures it uses to do so, as in the case with any other nation, must conform to international humanitarian and human rights law.”
The State Department on June 22 issued travel advisories to Israel and the Palestinian territories, noting that Americans attempting to enter Gaza by sea could be arrested and prosecuted by Israel before being deported. It also said that flotilla passengers were putting their lives at risk, noting that nine passengers, one of them American, were killed in May 2010 during the last attempt to reach the Port of Gaza.
Those deaths and about 20 passenger injuries occurred when the vessels were intercepted and taken over by IDF forces. About 10 Israeli troops were injured in fighting with the passengers.
Kirk declined Military.com’s request for comment.
Veterans slated to sail aboard the U.S.-flagged flotilla vessel include Ann Wright, a retired Army colonel turned State Department Foreign Service officer who resigned from her job in 2003 in protest of the U.S. invasion of Iraq; Ray McGovern, a former Army officer and CIA analyst who prepared daily security briefings for Presidents Ronald Reagan and George H.W. Bush; Ken Mayers, a former Marine intelligence officer who served with NSA detachments in Vietnam before taking a Reserve commission in 1966 and retiring as a major in 1978; and Joe Meadors, a former Navy signalman aboard the USS Liberty, which Israel attempted to sink during the Six Day War in 1967.
Meadors, who also took part in last year’s flotilla to Gaza, said Kirk’s plan to have the American military help Israeli Defense Forces against the civilian ships goes beyond even what happened in 1967.
“In 1967 the U.S. Navy was forbidden to come to the assistance of the USS Liberty when the ship was under attack by the IDF,” Meadors wrote in an email to Military.com. “Now Sen. Kirk wants the US Navy to move from clearing the way for the IDF to attack a US Navy ship … to actively intervening on behalf of the IDF by taking up arms against American citizens engaged in a humanitarian effort.
“Sen. Kirk wants the U.S. Navy to move from condoning war crimes committed against Americans to actually committing them,” he added.

NTS Notes:  OK... Where the HELL is the public outcry by this outright act of treason and call for murder by an "elected" member of the US Congress in America?    I have checked all the so called "media" outlets all day, and there has been absolutely NO news about this treasonous act!  I sure hope the good people of Illinois are seeing this clown, Mark Kirk, for what he truly is.... A slave to Israel and a traitor to America.

When Israel attacks this flotilla in international waters, and I guarantee that it will... Shooting will definitely take place....If Israel kills any unarmed civilians, then it is guilty of committing a serious war crime, just like the war crime it committed against the first Gaza Freedom Flotilla on May 31st, 2010 when it killed 9 innocent unarmed civilians!

As this article states... America let the criminal Israelis attack and kill 34 US sailors on the USS Liberty back on June 8th, 1967.   That alone was a serious war crime committed by Israel against the United States, but to this day these criminals have never been brought to justice for this crime....

Now it seems that the US government may be taking the horrific step from watching a war crime take place on its own citizens and doing absolutely nothing against the perpetrators of the crime, to actually participating with these same Israelis in a war crime against innocent civilians, including Americans!...   How times have changed!

The newest humanitarian aid flotilla to the concentration camp called the Gaza Strip is about to sail after several serious setbacks...We also know for a fact that there is a very strong possibility, if not a fact, that the criminal state of Israel will do everything in its power to stop this aid convoy from reaching Gaza, including shooting the aid workers on these ships in international waters, just as they did on the first freedom flotilla on May 31st, 2010!

It is a sad fact that because Israel is in total control over the United States of America, the Israelis will murder these people, some being American citizens,  and the US Government will do absolutely NOTHING!  In fact it seems that many of the snivelling Congress critters in the US Government have in fact been calling on their own government to actually aid their Israeli masters in allowing, and possibly aid in these upcoming acts of murder!

I am again totally appalled as to how badly the United States of America is firmly under the control of the criminal state of Israel.  We have seen how the real President of the United States, the criminal Prime Minister Benjamin Netanyahu went and spoke in front of his minions in the US Congress, and these traitorous Congress critters clapped and cheered as their master spoke.  It indeed was disgusting!

To again show everyone how much the US is now nothing more than a puppet nation for Israel, I want to present a great article that comes from Mohamed Khodr, written originally on May 23rd, 2011 on the website: My Catbird Seat, at www.mycatbirdseat.com, entitled: "Israel Again And Again Slaps A Cowardly America".   The information is informative and gives a very truthful perspective of the total control of America by Israel by calling it an occupation along the same lines that Israel illegally occupies Palestine.  Here is that article:


“A shocking crime was committed on the unscrupulous initiative of few individuals, with the blessing of more, and amid the passive acquiescence of all.”

–Tacitus, First Century Historian and Senator in the Roman Empire

And so continues the illegal occupations of America and Palestine…

by Mohamed Khodr / My Catbird Seat

Thus, what will history record of whom and what you are?

NTS Notes:  I personally look upon the entire American government as nothing more than slaves as well as cowards for not standing up to the evil criminal activities of Israel.   Every single "elected" representative in the American government has sold his/her soul to the devil for Jewish money, and first and foremost supports that criminal entity above and beyond the constituents who put them into office in the first place...

It is a fact that America is now the laughing stock of the entire world, because every other nation on Earth now sees America as nothing more than Israel's bitch.    At one time America may have been pictured as the shining beacon on the hill for the entire world to emulate.... Now others can see through the facade and know that America is as evil as the criminal state of Israel that it serves as its useful slave!

Again, I really have to ask:  When the HELL will the American public finally wake up?

NTS
Posted by Northerntruthseeker at 10:29 PM No comments: