It has to be repeated again for those still not up to speed yet... Global Warming, or as they call it now "Climate Change" caused by man is a total and complete fraud.  The proponents behind this scam have been in it for their own personal wealth, and for the introduction of "Green and Carbon" taxes to fleece the public.   One of the chief proponents of this swindle is Al Gore, who has been in this scheme to make BILLIONS of dollars personally.  Readers, it is simply GREED that drives these fraudsters.

For the last while with the revelations coming forward exposing man made Global Warming as a complete fraud, the chief huckster himself, Al Gore, has been lying low, and has made few public appearances.   But when he does, he generally now puts his own foot in his mouth!  Such is the case by this new article, from www.newsmax.com, where Al Gore claims that Global Warming is behind the record cold and snow being experienced around the planet at this time!  Here is that amazing article for my own readers to ponder:

By Jim Meyers
The record-setting snow and cold afflicting much of the nation in recent weeks doesn’t seem to jibe with Al Gore’s dire warnings about global warming. But Gore has an explanation for what’s causing the wintry conditions: global warming. 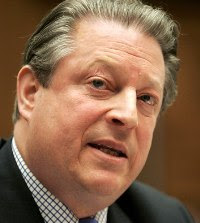 “I appreciate the question,” Gore wrote on his website.

“As it turns out, the scientific community has been addressing this particular question for some time now and they say that increased heavy snowfalls are completely consistent with what they have been predicting as a consequence of man-made global warming.”

Gore then quoted an article by Clarence Page in the Chicago Tribune in early 2010: “In fact, scientists have been warning for at least two decades that global warming could make snowstorms more severe. Snow has two simple ingredients: cold and moisture. Warmer air collects moisture like a sponge until it hits a patch of cold air. When temperatures dip below freezing, a lot of moisture creates a lot of snow.

NTS Notes:  Leave it up to Al Gore, Mr "Manbearpig" himself,  to again make such ridiculous and outlandish claims, and yet say that the evidence is backed up by science...

This man is out of touch with reality...The lie of man made Global Warming has been fully exposed now, and yet he comes out and still makes his false claims?   Who is he kidding any more?

Again, the fact is that this planet is experiencing a cooling trend due to reduced solar radiation output from our Yellow Dwarf star, Sol, and absolutely NOT by man made sources... These cycles are natural, and have been going on for millions of years.....

These fraudsters are now reaching the point of desperation.   I really wonder what they will claim next?  Stay tuned...

NTS
Posted by Northerntruthseeker at 11:21 AM

Gore is in the clear; he knows it and the wit who wrote this line knows it . . .

"Americans will believe anything, as long as it's not the truth."

zzzzzz... Oops! Sorry.... I fell asleep after listening to another Al Bore speech.....

I guess the man that invented the Internet does not care about what he says anymore, especially about his personal beliefs in "Climate Change"!