Non-Wisdom From The Talmud: Like The Donkey, Non-Jews Were Created To Serve Jews!

I have been in this fight for decades now to show people some truth about the world around us.  I came across the truth about Talmudic Judaism about a decade ago after reading the Talmud for myself.  I found it to be one of the most revolting pieces of pure garbage and rampant racism and supremacism ever written.  Since then, I have focused on exposing these evil people for their crimes against the rest of humanity and to expose them for the vile racism that they believe in, and exactly how they believe themselves to be superior over the rest of humanity.

Now, I have further proof that shows exactly how the Talmudic Jews picture the rest of mankind.  I came across the following article from www.desertpeace.wordpress.com, and I found it to be vile and utter revolting.  Readers, I ask that you please read the following article for yourselves, and hold your disgust until after you have finished it in its entirety:


NON-WISDOM FROM THE TALMUD … LIKE THE DONKEY, NON-JEWS WERE CREATED TO SERVE JEWS

“Non-Jews were born only to serve us. Without that, they have no place in the world-only to serve the People of Israel.” 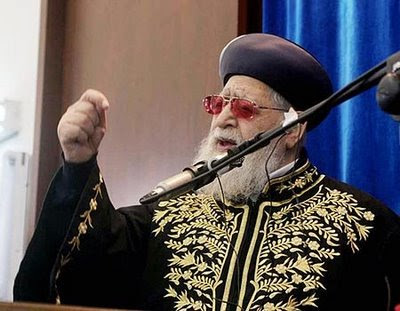 Major rabbi  says non-Jews are donkeys,  created to serve Jews
From Khalid  Amayreh in occupied  East Jerusalem
A major Jewish religious figure in Israel has likened non-Jews to donkeys and beasts of burden,  saying  the main  reason for their very existence is to serve Jews.
Rabbi Ovadia  Yosef,  spiritual mentor of the religious  fundamentalist  party, Shas,  which represents Middle Eastern Jews, reportedly said during  a Sabbath homily earlier  this week that “the sole  purpose of non-Jews is to  serve Jews.”
Yosef is considered a major religious  leader in  Israel who enjoys the allegiance of hundreds of thousands of followers.
Shas is a  chief coalition partner in  the current Israeli government,
Yosef, also a former Chief Rabbi of Israel,  was quoted by the right-wing newspaper, the Jerusalem  Post, as saying  that the basic function of a goy, a derogatory word for a gentile, was to serve Jews.
“Non-Jews were born only to serve us. Without that, they have no place in the world-only to serve the People of Israel,” Yosef said in his weekly Saturday night sermon which was devoted to laws regarding actions non-Jews are permitted to perform on the Sabbath.
Yosef also reportedly said that the lives of non-Jews in Israel are preserved by God  in order to prevent losses to Jews.
Yosef,  widely considered a prominent  Torah sage and authority on the interpretation of  Talmud, a basic Jewish scripture, held a comparison  between animals of burden and non-Jews.
“In Israel,  death has no dominion  over them…With gentiles, it  will be like any person-They need to die, but God will  give them  longevity. Why? Imagine that one’s  donkey would die, they’d lose their money.
“This is his servant…That’s why he  gets a long life,  to work  well for this Jew.”
Yosef further  elucidated his  ideas about the servitude of gentiles to Jews, asking “why are gentiles needed? They will work, they will  plow, they will reap; and  we will sit like an effendi and eat.”
“That is why gentiles were created.”
The concept of gentiles being infra-human beings or  quasi-animals is well-established in Orthodox Judaism.
For example, rabbis affiliated with the Chabad movement, a supremacist but influential  Jewish sect, teach openly that at the spiritual level, non-Jews have the status of animals.
Abraham Kook, the religious mentor of the settler movement, was quoted as saying that the difference between a Jew and a gentile was greater and deeper than the difference between humans and animals.
“The difference between a Jewish soul and souls of non-Jews — all of them in all different levels — is greater and deeper than the difference between a human soul and the souls of cattle.”
Some of Kook’s manifestly racist  ideas are taught in the Talmudic college, Merkaz H’arav, in Jerusalem. The college is  named after Kook.
In his book, Jewish History, Jewish  Religion: The Weight of Three Thousand Years,  the late Israeli writer and intellectual Israel Shahak argued that whenever Orthodox rabbis use the word “human,” they normally didn’t  refer to all humans, but  only to Jews, since non-Jews are not considered humans according to Halacha of Jewish law.
A few years ago, a member of the Israeli Knesset, castigated Israeli soldiers for “treating human beings as if they were Arabs.”  The Knesset member, Aryeh Eldad, was commenting on the evacuation by the Israeli army of a settler outpost in the West Bank.
Faced with the negative effect  of certain  Biblical and Talmudic teachings on inter-religious relations,  some Christian leaders in Europe have called on the Jewish religious establishment to reform the traditional  Halacha perceptions of  non-Jews.
However, while the Reform and Conservative sects of Judaism, have related  positively to such calls, most Orthodox Jews have totally rejected the calls, arguing  that the Bible is God’s word which can’t be altered under any circumstances.
The Bible says that non-Jews  living under  Jewish rule must serve as “water carriers and wood hewers” for the master  race.
In Joshua (9:27),  we read ” That day, Joshua made the Gibeonites woodcutters and water carriers for the community and for the altar of the Lord at the Place the Lord would choose. And that is what they are to this days.”
Elsewhere in the Bible, Israelites are strongly urged to treat “strangers living in your midst” humanely “because you yourselves were strangers in Egypt.”

NTS Notes:  Well, here it is in THEIR  own words for everyone to see for themselves.   These people actually have the gall to believe that we are nothing more than donkeys, or cattle to them.   Our future in their twisted mentality is to be their slaves forever!

I am just wondering when they will come out and cry their phony "antisemitism" for anyone exposing this latest factual evidence of their own rampant racism and sickening supremacism?   Guaranteed, they will try to spin this and try to deny the truth....

The United States alone continues to send BILLIONS of dollars to the criminal state of Israel so that they can promote such racist idealisms and to pursue their sick and twisted dream of world domination!   What the heck is the matter with people when they cannot see the evidence for themselves that if they are able to attain their world domination thanks to the aid of the US itself, we are to be nothing more than their slaves?

Again, when the heck will people finally wake up and see the truth for themselves?.. Please spread this article and the message to everyone you know.   The truth must be told!

NTS
Posted by Northerntruthseeker at 9:55 PM

The situation will never change until the "within" of the none-Jews themselves change. There is lots of corruption in the none-Jews side of the equation, and unless the corruption is eradicated, evil will always attract evil, and the Jews will always be a seeping acid eating the blossom of humanity.

No change is going to happen until we ourselves change.

After we have changed, those evil Jewish horns will retract like earth-worms do into the mud.