Man made Global Warming is a fraud, period.  Sorry to burst your bubble, you Global Warming believers, but you have been had by criminals who are in it for the money!   There is absolutely no such thing as man made Global Warming on this planet, and in fact we are about to enter a long term of Global COOLING due to the natural cycles of our Sun's radiation output.

But give the Global Warming believers some credit for their audacity.  Here is a prime example, from a new article from the UK at www.dailymail.co.uk, where the Global Warming so called "scientists" are now pushing the asinine notion that increased solar output actually causes Global Cooling!  Here is that article for everyone to see for themselves:

A puzzling discovery has raised a question mark over the Sun's impact on climate change and could provide ammunition for sceptics, it was revealed today.
Until now it has been assumed that less activity from the Sun equates to less warming of the Earth.
But the new research, which focuses on a three-year snapshot of time between 2004 and 2007, suggests the opposite may be true.
As solar activity waned at the end of one of the Sun's 11-year cycles, the new data show the amount of energy reaching the Earth at visible wavelengths rose rather than fell.
Enlarge 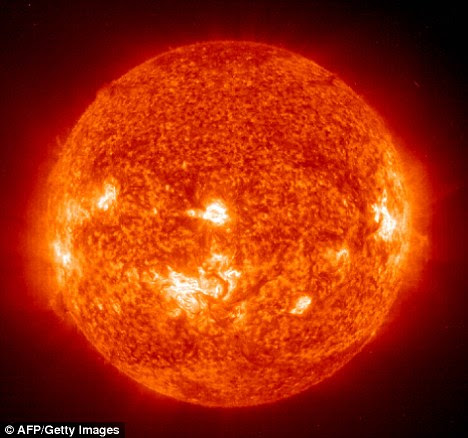 Several giant sunspots crossing the face of the Sun. The amount of solar activity may have negligible effects on the Earth's climate
Scientists believe it may also be possible that during the next up-turn of the cycle, when sun activity increases, there might be a cooling effect at the Earth's surface.
A further twist arises from the fact that over the past century, overall solar activity has been increasing.
If the new findings apply to long as well as short time periods, this could translate into a small degree of cooling rather than the slight warming effect shown in existing climate models. It would effectively turn received wisdom on its head.
Sceptics are likely to say the results further undermine the reliability of climate change science, especially with regard to  solar effects.
Professor Joanna Haigh, from Imperial College London, who led the study, said: 'These results are challenging what we thought we knew about the Sun's effect on our climate.
However, they only show us a snapshot of the Sun's activity and its behaviour over the three years of our study could be an anomaly.
'We cannot jump to any conclusions based on what we have found during this comparatively short period and we need to carry out further studies to explore the sun's activity and the patterns that we have uncovered on longer timescales.
Enlarge 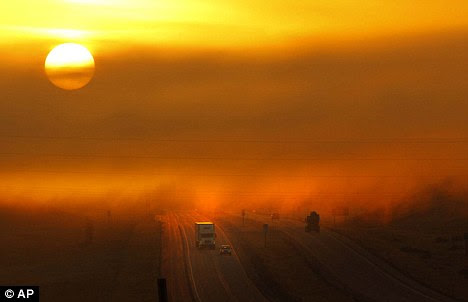 The rising sun lights up the sky as low-lying clouds sit along the horizonin Wyoming. Researchers have warned against jumping to any conclusions based on what the have found during this 'comparatively short period'
'However, if further studies find the same pattern over a longer period of time, this could suggest that we may have overestimated the sun's role in warming the planet, rather than underestimating it.'
Speaking at a news briefing in London, she denied that it would fuel scepticism about climate change research.
'I think it doesn't give comfort to the climate sceptics at all,' she said.
'It may suggest that we don't know that much about the Sun. It casts no aspersions at all upon the climate models.'
The research, published in the journal Nature, is based on data from a satellite called SORCE (Solar Radiation and Climate Experiment) that has been measuring the Sun's energy output at X-ray, ultraviolet, visible, and near-infrared wavelengths.
Prof Haigh's team found that, above an altitude of 28 miles, concentrations of ozone in the atmosphere increased as total solar output decreased. 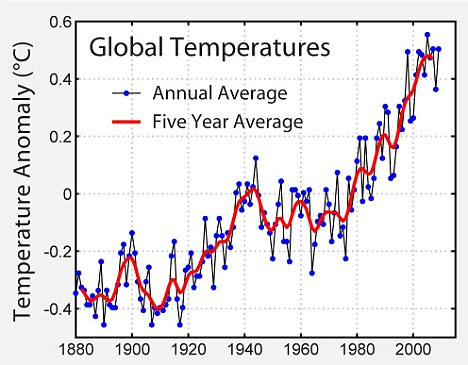 How global temperatures have risen steadily since records began in 1880 How Surface and satellite temperatures have varied over the past 35 years
The ozone rise accompanied a steep fall in levels of ultraviolet radiation.
Closer to the ground, an increase in visible radiation caused heating of the lower atmosphere.
'At face value, the data seem incredibly important,' Michael Lockwood, a space physicist at the University of Reading, told Nature.com.
'If solar activity is out of phase with solar radiative forcing, it could change our understanding of how processes in the troposphere and stratosphere act to modulate Earth's climate.'
'The findings could prove very significant when it comes to understanding, and quantifying, natural climate fluctuations,' he added.
'But no matter how you look at it, the Sun's influence on current climate change is at best a small natural add-on to man-made greenhouse warming.'
'All the evidence is that the vast majority of warming is anthropogenic. It might be that the solar part isn't quite working the way we thought it would, but it is certainly not a seismic rupture of the science.'

NTS Notes:  I have presented the entire Daily Mail article without any editing of their phony charts.   These charts have been their basis of "proof" of Global Warming, but have already proven to be totally false because the Global Warming pushers have been caught hiding the real decline in temperatures on this planet for the last 25+ years or more.

Bottom line, readers... These criminals do not even know which way is up anymore.  They are showing desperation by presenting this insane finding and presenting it as "science".    The fact is that they will try anything now to continue to get people to follow the Global Warming scheme.    But that desperation is falling on deaf ears now, because people are no longer gullible and are rapidly turning against these criminals.

Global Warming is a lie, period.... Time to live with the truth, you die hard believers, that you have been played as suckers!   Maybe it is time for all of us to push for the arrest of the criminals involved in this sick game and stop this con once and for all.

NTS
Posted by Northerntruthseeker at 10:08 PM