America is right now at a crisis point in its existence as a nation.  Right now, there is a growing movement to have the entire financial institution, and the criminal Federal Reserve system itself, investigated for their roles in the so called Mortage Foreclosure scandal, now being called "ForeclosureGate" by many sites in the blogosphere.  It is truly amazing that the Zionist Jewish controlled Mainstream Media is absolutely refusing to tell the American public that the entire system could unravel due to exposure on how deep the fraud truly is!

It troubles even myself sometimes as to how the United States could have allowed itself to get to this point in its history.   The fact is that the entire debt based monetary system in the United States was doomed to failure the moment the criminal Federal Reserve system was given the power to issue money at interest back in 1913!   Now some 97 years later, the Federal debt accumulated by this private banking ponzi scheme has ruined the nation!

For this article, I want to turn to one of the greatest Presidents in US History, Thomas Jefferson, who warned the American public at the turn of the 19th century about the dangers of Private Banking.   I want to present the following article from www.dailybail.com, entitled: "Can We Party Like Its 1776 And Just Start Over?  Thomas Jefferson's Top Ten Quotes On Money And Banking" for all of my own readers to view in its entirety.   Thomas Jefferson's words were never heeded, and now America may be paying the ultimate price for its ignorance of these facts:


« Can We Party Like It's 1776 And Just Start Over? Thomas Jefferson's Top 10 Quotes On Money And Banking » 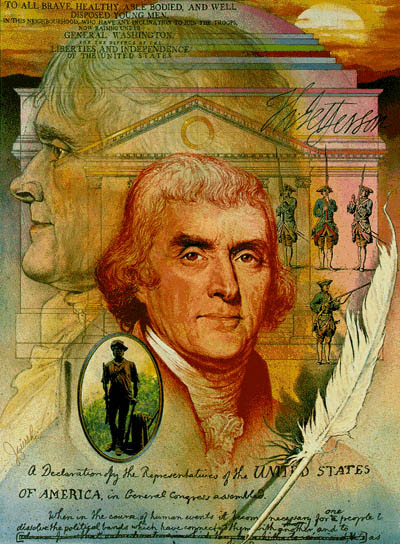 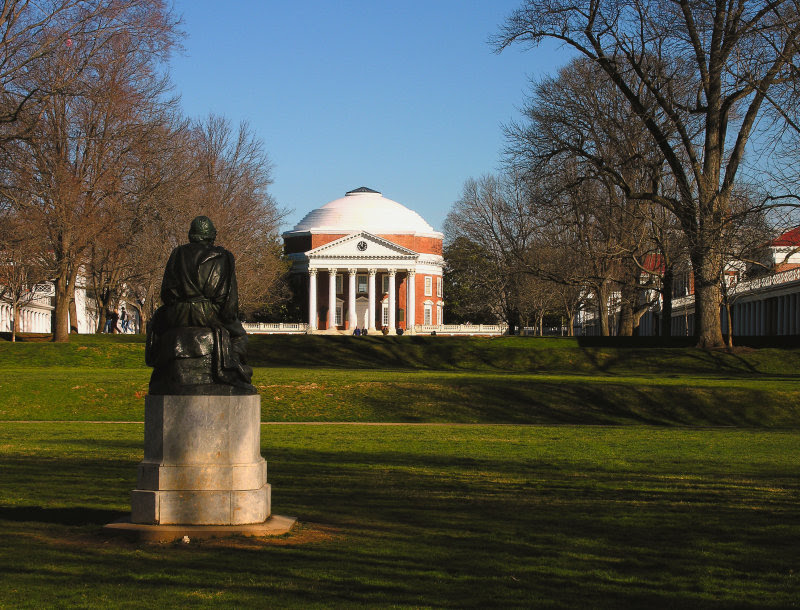 Disclosure:  I am a graduate of the University of Virginia.
Jefferson's most magnificent creation -- The Rotunda at UVa in Charlottesville.  Don't miss this list of quotes.  Uncanny how little has changed about bankers in 200 years.
---
Truth from TJ:
"If the American people ever allow private banks to control the issue of their currency, first by inflation, then by deflation, the banks and corporations that will grow up around [the banks] will deprive the people of all property until their children wake-up homeless on the continent their fathers conquered. The issuing power should be taken from the banks and restored to the people, to whom it properly belongs."

"I sincerely believe that banking establishments are more dangerous than standing armies, and that the principle of spending money to be paid by posterity under the name of funding is but swindling futurity on a large scale." --Thomas Jefferson to John Taylor, 1816.

"Everything predicted by the enemies of banks, in the beginning, is now coming to pass. We are to be ruined now by the deluge of bank paper. It is cruel that such revolutions in private fortunes should be at the mercy of avaricious adventurers, who, instead of employing their capital, if any they have, in manufactures, commerce, and other useful pursuits, make it an instrument to burden all the interchanges of property with their swindling profits, profits which are the price of no useful industry of theirs." --Thomas Jefferson to Thomas Cooper, 1814.

"The art and mystery of banks... is established on the principle that 'private debts are a public blessing.' That the evidences of those private debts, called bank notes, become active capital, and aliment the whole commerce, manufactures, and agriculture of the United States. Here are a set of people, for instance, who have bestowed on us the great blessing of running in our debt about two hundred millions of dollars, without our knowing who they are, where they are, or what property they have to pay this debt when called on."
"The treasury, lacking confidence in the country, delivered itself bound hand and foot to bold and bankrupt adventurers and bankers pretending to have money, whom it could have crushed at any moment…These jugglers were at the feet of government. For it was not, any confidence in their frothy bubbles, but the lack of all other money, which induced…people to take their paper" -- Thomas Jefferson, October 1815 letter to (former) Treasury Secretary, Albert Gallatin.

"I own it to be my opinion, that good will arise from the destruction of our credit. I see nothing else which can restrain our disposition to luxury, and to the change of those manners which alone can preserve republican government. As it is impossible to prevent credit, the best way would be to cure its ill effects by giving an instantaneous recovery to the creditor. This would be reducing purchases on credit to purchases for ready money. A man would then see a prison painted on everything he wished, but had not ready money to pay for." --Thomas Jefferson to Archibald Stuart, 1786.

"If the debt which the banking companies owe be a blessing to anybody, it is to themselves alone, who are realizing a solid interest of eight or ten per cent on it. As to the public, these companies have banished all our gold and silver medium, which, before their institution, we had without interest, which never could have perished in our hands, and would have been our salvation now in the hour of war; instead of which they have given us two hundred million of froth and bubble, on which we are to pay them heavy interest, until it shall vanish into air... We are warranted, then, in affirming that this parody on the principle of 'a public debt being a public blessing,' and its mutation into the blessing of private instead of public debts, is as ridiculous as the original principle itself. In both cases, the truth is, that capital may be produced by industry, and accumulated by economy; but jugglers only will propose to create it by legerdemain tricks with paper." --Thomas Jefferson to John W. Eppes, 1813.

"The Bank of the United States is one of the most deadly hostilities existing, against the principles and form of our Constitution. An institution like this, penetrating by its branches every part of the Union, acting by command and in phalanx, may, in a critical moment, upset the government. I deem no government safe which is under the vassalage of any self-constituted authorities, or any other authority than that of the nation, or its regular functionaries. What an obstruction could not this bank of the United States, with all its branch banks, be in time of war! It might dictate to us the peace we should accept, or withdraw its aids. Ought we then to give further growth to an institution so powerful, so hostile?" --Thomas Jefferson to Albert Gallatin, 1803.

"The principle of rotation... in the body of [bank] directors... breaks in upon the espirit de corps so apt to prevail in permanent bodies; it gives a chance for the public eye penetrating into the sanctuary of those proceedings and practices, which the avarice of the directors may introduce for their personal emolument, and which the resentments of excluded directors, or the honesty of those duly admitted, might betray to the public; and it gives an opportunity at the end of the year, or at other periods, of correcting a choice, which on trial, proves to have been unfortunate." --Thomas Jefferson to Albert Gallatin, 1803.

"A spirit... of gambling in our public paper has seized on too many of our citizens, and we fear it will check our commerce, arts, manufactures, and agriculture, unless stopped." --Thomas Jefferson to William Carmichael, 1791.

"Our public credit is good, but the abundance of paper has produced a spirit of gambling in the funds, which has laid up our ships at the wharves as too slow instruments of profit, and has even disarmed the hand of the tailor of his needle and thimble. They say the evil will cure itself. I wish it may; but I have rarely seen a gamester cured, even by the disasters of his vocation." --Thomas Jefferson to Gouverneur Morris, 1791.

NTS Notes:  As I stated already, the United States has never learned from the brutal facts about debt based monetary systems.   History has shown that every country that brought in such an evil system eventually collapsed, or faced permanent ruination!

The facts are simple:  Money must be only printed by Governments, and absolutely DEBT FREE!   Giving  criminal private Zionist Jewish bankers the exclusive power to print money basically hands the entire nation over to these criminals.   Debt slavery, based on Usury,  of a nation's citizens to these private bankers is indeed SLAVERY!

There is a famous quote that comes into play in all of this:  "If we do not learn from history, then we are doomed to repeat it!"    This is so true when it comes to a once great nation, the United States, not learning from the history of ruination of great nations due to crushing debt.   Thomas Jefferson knew the dangers as well, and even his own words were not heeded!

NTS
Posted by Northerntruthseeker at 9:56 PM