America is rapidly becoming a massive and very dangerous police state.  Right now the rights of every American citizen are being stripped away rapidly without most knowing that their freedoms are no longer there.  It is a sad fact that most Americans will wake up one day, with their freedoms gone, and wonder what the hell just happened?  By that point, it will be too late to do anything to restore their freedoms short of revolution.

That is why there are groups in America such as the "Oath Keepers".   The Oath Keepers are a group of military, policemen, firemen, and officials that believe very strongly in resisting oppression and support the freedoms and rights as laid out in the US Constitution.   They have sworn an oath to uphold the Constitution of the United States of America against all enemies, both foreign and DOMESTIC!  Their very motto is:  "Not on our watch".    From my own point of view, I see absolutely nothing wrong with this idea and I definitely believe that all Americans should either join or support the Oath Keepers' efforts in   stopping America from plunging into a dictatorship.

But it seems that US officials are doing everything necessary to stop the efforts of the nation's Oath Keeper members, even to the point of taking their children from them!   Here now, I want to present the following article by Paul Joseph Watson, from the website: www.infowars.com, where it seems that an Oath Keeper couple in New Hampshire has just had their newborn baby seized from them by Government officials on the insane grounds that the baby's parents are members of a "dangerous militia"!   Here is that article for my own readers to ponder:

Photo: Tammra McCauley
A newborn baby was ripped from its mother’s arms by officials from the New Hampshire Division of Family Child Services accompanied by police after authorities cited the parents’ association with the Oath Keepers organization as one of the primary reasons for the snatch, heralding a shocking new level of persecution where Americans’ political beliefs are now being used by the state to kidnap children.
Below: Excerpts of State of New Hampshire documents concerning the case. Note: full documents withheld to ensure family privacy. 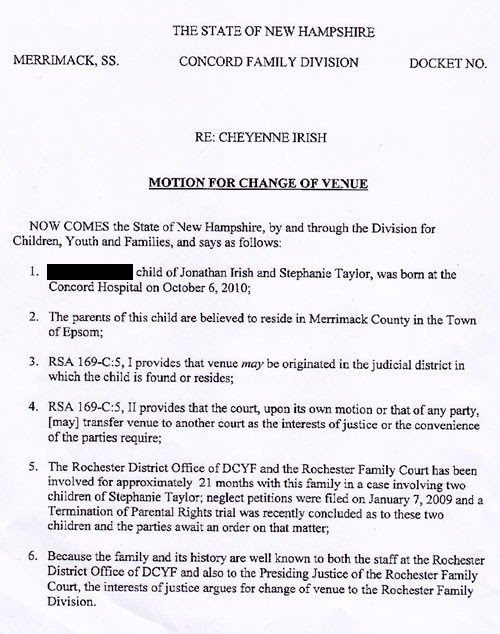 Note: the following is from a separate document and not part of the above document. 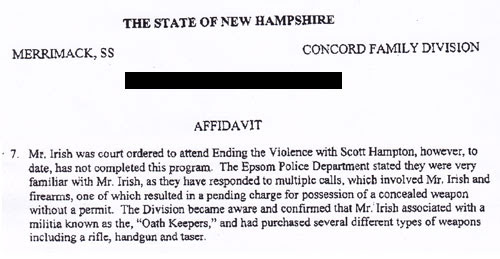 What was supposed to be one of the most joyous occasions of their lives turned into a nightmare for John Irish and Stephanie Janvrin, after they were told by The Director of Security and the Head Nurse at Concord Hospital that their baby would be taken to be checked by the hospital pediatrician.
“They lied to us – they got us to allow them to take our daughter under false pretenses, we didn’t even have a choice,” said Irish.
When Irish tried to stop his daughter being taken, the baby was immediately wheeled out in a bassinet, after which Irish saw three men in suits accompanied by uniformed police officers as well as detectives and social workers. who proceeded to try to search Irish.
“They forced me to stand up, held my hands behind my back and patted me down,” said Irish, before police told him they were taking the baby.
“My fiancé didn’t even get any time to bond with the baby – they came in and stole our child,” said Irish. The parents were given a couple of minutes with their daughter before being forced by police to leave the hospital. Irish was subsequently told that a “security officer” would follow his every move.
The affidavit in support of the decision to take the child, which has been verified by Oath Keepers, states, “The Division became aware and confirmed that Mr. Irish associated with a militia known as the Oath Keepers,” confirming that political beliefs were, amongst other reasons, one of the primary factors behind the snatching of the baby.
Even if the additional reasons cited in the affidavit, which are unproven at this time, could be considered sufficient reason for the state to take the baby, the fact that political affiliations were evenmentioned is a frightening indictment of how far the government’s war on Americans who dissent against authority has advanced.

“Regardless of the other allegations, it is utterly unconstitutional for government agencies to list Mr. Irish’s association with Oath Keepers in an affidavit in support of a child abuse order to remove his daughter from his custody.” writes Oath Keepers founder Stewart Rhodes. “Talk about chilling speech! If this is allowed to continue, it will chill the speech of not just Mr. Irish, but all Oath Keepers and it will serve as the camel under the tent for other associations being considered too risky for parents to dare. Thus, it serves to chill the speech of all of us, in any group we belong to that “officials” may not approve of. Don’t you dare associate with such and such group, or you could be on “the list” and then child protective services might come take your kids.”


The parents were not even full members of the Oath Keepers organization, they were merely on a discussion list related to the group. This makes the case even more shocking – you don’t even have to be directly associated with a group that the government deems to be a “militia” to have your baby stolen – you merely have to be involved in online discussions of issues relating to the constitution and freedom in America.
Irish’s father’s web page clearly states that he supports a “NON-violent, law abiding gathering of like minded Patriots,” and that he is “AGAINST ANY acts of violence or illegal activity.”
“The Sons of Liberty Riders does not endorse or tolerate radical, extreme, violent or racial postings,” states the website.
The Oath Keepers organization is not a “militia,” as the affidavit claims, it is merely a loose network of current and former military and law enforcement professionals who have sworn not to obey unconstitutional orders such as gun confiscation, warrantless searches and mass internment of Americans. The group is committed to non-violence.
If this case is allowed to stand it opens up a hellish future for free speech and political discourse in America. If parents live in fear of having their children stolen by the state because they criticize the government, the United States can rank itself amongst the worst dictatorships in history who invoked the threat of taking people’s children if they spoke out against tyranny.
Oath Keepers founder Stewart Rhodes has announced that a legal defense fund will be created to help Irish, and that the organization, “will actively pursue aggressive legal remedy and redress.”
“We will assist in locating competent local legal counsel in New Hampshire and additional expert legal counsel from around the country in First Amendment and child custody law,” wrote Stewart on the Oath Keepers website.
“There can be no freedom of speech, no freedom of association, no freedom to even open your mouth and “speak truth to power,” no freedom AT ALL, if your children can be black bagged and stolen from you because of your political speech and associations — because you simply dare to express your love of country, and dare to express your solidarity and fellowship with other citizens and with active duty and retired military and police who simply pledge to honor their oath and obey the Constitution. It was to prevent just such outrageous content based persecution of political dissidents that our First Amendment was written.”
Watch the video below in which John Irish describes what happened.
Fresh food that lasts from eFoods Direct (Ad)
We join with the Oath Keepers organization in asking people to flood the relevant organizations with calls and emails demanding the release of the baby. Please be polite.
Contact New Hampshire DCWY
Telephone (603) 271-4711
Toll Free Number (800) 852-3345
Fax Number (603) 271-4729
Email: Click here to email.
Contact Concord Hospital
(603) 225-2711
Toll Free Instate: (800) 327-0464
Email: Click here to email.
—
Paul Joseph Watson is the editor and writer for Prison Planet.com. He is the author of Order Out Of Chaos. Watson is also a fill-in host for The Alex Jones Show. Watson has been interviewed by many publications and radio shows, including Vanity Fair and Coast to Coast AM, America’s most listened to late night talk show.

NTS Notes:  I sure hope that all of my readers take this article and spread it around to others.   Oath Keepers is absolutely not a dangerous militia as the US Government wants people to falsely believe.  This latest act of atrocity against these parents goes beyond the scope of human decency and people should be rising up in anger against this criminal action.

You all must know by now that America as a free nation has officially died once they start arresting or in this case take children away from parents for "Political Beliefs".   This type of action happened before in the Soviet Union under tyrannical Communism.  Nobody in their right mind would ever believe that this could happen in the "free" United States, but it has happened.   This is definitive proof that the United States is now the land of tyranny!

Lets put an end to this madness, and have that child restored to her parents.   Spread the word, readers!

NTS
Posted by Northerntruthseeker at 9:31 PM

Dr William Pierce once said that “every time you reach for the phone to your lawyer instead of for your shotgun, you lose a bit of your manhood.”

Although it's unfortunate that the US Government is starting to steal posterity from those with differing political beliefs, you should take a look at who supports the "Oath Keepers":

Scroll down to "Supporters of Oath Keepers"

A good article that highlights what I've said:

Absolutely no reason for any government to take a newborn child away from its mother... Unless the mother is found to be totally unfit from the get go for having the child in the first place...

This couple has not done any harm to others by physical means... I have not heard of either of them going out and killing anybody, or causing harm to property.... So you must ask yourself... How can these officials get away with suddenly calling a person's political leanings a crime????

From what I have learned, in a land of freedom of speech, Political views are NOT a criminal offense... Unless you consider the crime that the Government of the US has just committed to change that parameter!

If we allow government to suddenly lock up people for their political views, then it is the end of freedom everywhere....period!

I for one am definitely wanting to see how this one plays out... If the government gets away with this heinous crime, then a precedence is set, and more people will suffer this same consequence....

Like I said... I thought this type of idealism was only practiced in totalitarian states? Has the US suddenly become one?