Israeli Army Official Admits Rockets Fired From Gaza Are NOT From Hamas! (Guaranteed A Mossad Operation)

There was a recent `rocket`` attack that was launched from the prison camp known as the Gaza Strip into Israeli territory. The funny thing was that the so called ``rocket`` carried no explosives(!), and landed (as usual) in an occupied area away from any population centers! It seems that the more and more we see these ``rocket`` attacks, the more we realize that something is not right in that they never seem to actually hit any targets!

Now comes some interesting revelations courtesy of the website: www.sott.net, where an IDF official is quoted as stating that the recent `rocket``attack was not fired by Hamas, and does not justify the new Israeli airstrikes against Gaza! Here is that article for my own readers to view: 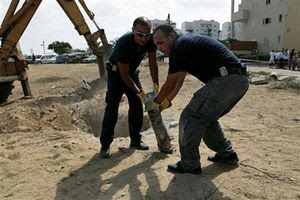 © Associated Press
Israeli police officers remove the shell of a "Grad rocket" (homemade devices that contain no explosives) allegedly fired by "unknown militants" from the Gaza Strip and landed in the southern city of Ashkelon, 30 Jul 2010
A military official told Ynet he did not believe Hamas had fired the Grad rocket that exploded in Ashkelon Friday morning, though it remains unclear who was responsible.

"Hamas still wants to maintain the status quo in the Strip," he said. "It continues to grow stronger, but is deterred by the IDF and doesn't want to face a conflict."

NTS Notes: Ok.... If Hamas did not fire the rockets.... Then I can tell you exactly who did it and why!

It is well known that the Mossad are masters of deception and they use that deception to trigger new wars of conquest for the evil Israeli state. It has been known for some time now that the Mossad operatives would infiltrate Israel`s neighbouring territories, set up small rocket platforms, and launch those rockets back into Israeli territory as a pretext for the Israelis to launch attacks against those territories. The Israelis were caught red handed a while back in setting up such bogus rocket attacks in Lebanon as the prime example!

Guaranteed the Israeli Mossad sent a few operatives into Gaza to launch their phony rocket attacks into Israel, which always seem to hit nobody and nothing of importance, so that the evil Israelis could somehow justify bombing Gaza once again. The Israelis have been lying for years claiming that their attacks against their neighbours are justified because of the so called ``thousands`` of rockets that Hamas and Hezbollah supposedly possess. More and more we are finding that these Hamas-Hezbollah ``rockets`` absolutely do not exist.

Again, Israel caught in another lie, and the poor people of Gaza are paying the price for the lie. When will the world finally wake up to the madness of the state of Israel? That time is long overdue...

Posted by Northerntruthseeker at 11:35 AM