I have been saying it for months on months that Israel wants the Litani River that flows through southern Lebanon desperately because it has failed to use proper water conservation methods for maintaining fresh water supplies in a region that is basically desert! The Zionist Jews have basically wasted that precious resource and have been drawing water out of the aquifers in the Occupied West Bank and the Jordan River to the point now that these sources are also almost bone dry. So rather than actually force serious conservation methods on its citizens, it will steal water from another source...The Litani River!
Now we are watching as war with Lebanon may be right around the corner. Just today, an Israeli soldier was killed by the Lebanese because he was clearly in Lebanese territory. In retaliation, and an obvious provocation, the Israelis have attacked and killed several Lebanese soldiers. This obvious blatant Israeli want for war is escalating rapidly, and even according to this article, from www.warincontext.org, the latest Israeli (deliberate) Provocations could trigger a new all out war against Lebanon. Here is that article: 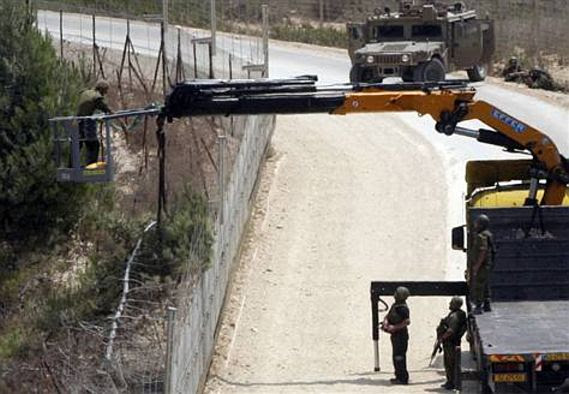 An Israeli soldier being dangled like bait on the Lebanese side of the Israel-Lebanon border today.

Border clashes between Israeli and Lebanese troops have left three Lebanese soldiers and a journalist dead. Lebanon’s Hezbollah TV, Al Manar, reports one high-ranking Israeli officer has been killed but this has not been confirmed by the Lebanese army or UN troops stationed in southern Lebanon.

As the photo above makes clear, this was a blatant act of provocation by Israeli forces — no one accidentally strayed over the border. This is more like kids tossing matches to find out whether a brush fire will start.

Should a new war break out, Israel is determined to strike a more devastating blow more quickly than it did during the last conflict, in which it failed in its objective of destroying Hizballah. It has publicly warned that it would destroy Lebanese civilian infrastructure, and that Syria, as Hizballah’s armorer, would not be off-limits. But Hizballah believes its capacity to fire missiles into Tel Aviv is key to restraining Israel from returning to finish off the Shi’ite militia. And, of course, amid regional tensions over Iran’s nuclear program, members of the self-styled “axis of resistance” — Iran, Syria, Hamas and Hizballah — have deepened their alliance, raising the possibility of any one of those groups joining the fray should any of the others come under attack from Israel or the U.S.

Although all of the main players have good reason to avoid initiating another war right now, the Crisis Group warns that “tensions are mounting with no obvious safety valve.” At some point, Hizballah’s growing deterrent could cross Israel’s red line. And the Western diplomatic boycott of the resistance camp is cause for alarm because there are no effective channels through which the various antagonists can be made to understand how their actions could produce unintended consequences — in the tragic tradition of Middle Eastern wars that erupted in part because the adversaries failed to understand one another’s intentions. Indeed, after proclaiming his movement’s “divine victory” in standing up to Israel’s 2006 offensive, a feat that made him a hero on the streets of the Arab world, Hizballah leader Sheik Hassan Nasrallah did admit that had he known Israel would respond with a full-blown invasion, he would have avoided the provocation of snatching the Israeli troops that started the showdown.

The danger posed by the lack of communication channels between the resistance camp and the Israelis explains why British Prime Minister David Cameron, a recent guest at the White House, last week went to Ankara to urge Turkey to maintain its ties with Israel and use its ties to the likes of Syria to facilitate communication that could mitigate an outbreak. Turkey has been pilloried in some quarters in the West — and certainly in Israel — for its diplomatic rapprochement with the likes of Syria, Iran and Hamas, but Cameron’s appeal was a tacit admission that the continuing Bush-era policy of refusing to engage with the region’s designated “radicals” has sharply diminished the ability of the U.S. and the European Union to influence events in the Middle East. Peace talks between Palestinian Authority President Mahmoud Abbas and the Israelis are all very well, but Abbas is not at war with Israel, nor would he be even if a new round of fighting broke out in Gaza.

While it is widely assumed that Hezbollah would have a critical role to play in the event that Israel launches or instigates an attack on Iran, it likewise follows that the IDF will be tempted to decisively neutralize this threat preemptively. The problem, for Israel, is this: what happens if a preemptive attack fails, meaning, Israel comes under even heavier rocket attack than it did in 2006 and that Hezbollah survives an even more brutal onslaught than it suffered in that war? In such an outcome, the idea of subsequent military action against Iran becomes even more implausible than it already is.

IDF Lieutenant Colonel Dov Harari, 45, was killed in the border skirmish with the Lebanese army Tuesday.

Harari was an IDF reservist who served as a battalion commander in the sector where the clash took place. Another Israeli commander sustained serious wounds in the skirmish, the army said.

The fact that Al Manar reported this fatality hours before it was confirmed by the IDF, suggests that Hezbollah continues to effectively monitor Israeli communications.

Haaretz provides the quaint explanation that the violence was triggered “over a move by Israeli soldiers to trim some hedges along the border,” though the Jerusalem Post said: “Other reports said the Israeli soldiers were attempting to plant cameras.”

NTS Notes: So it seems that the Israeli solution as usual is rather than solve the problem themselves, lets just grab the solution away from our neighbours! The Litani River has been coveted by these criminals for many years as their ultimate solution for their water shortages, and now it seems that they are making their push for that solution. It does not matter to these criminals that thousands of innocent people could die as a result of their latest provocation!
Lets get the truth out about this latest Israeli push for war. If the Israelis are this stupid that they cause their own country to go bone dry, then let them solve the problem that they created themselves. Invading other nations to solve crises is absolutely insane and criminal!
More to come
NTS
Posted by Northerntruthseeker at 9:23 PM