For the last while we have seen Hollywood director, James Cameron come out and call Global Warming skeptics "boneheads", and say that he wanted to shoot it out with them at high noon (!). After that, he first called for a debate with the skeptics and then refused to debate using every excuse possible. Even I at first thought that James Cameron refused to debate, due to the fact that he discovered that the skeptics are right, and the entire Global Warming scare was a massive scam. It seems that I could not have been more wrong about James Cameron....

It seems that according to this new article, from www.noteviljustwrong.com, James Cameron is now asserting that he will only debate with people of "His own stature"! I could not believe what I was seeing, and I want to put that article up right here for my own viewers to see for themselves:

James Cameron demands people of his "stature" for climate debate

Back in March James Cameron said, “I want to call those deniers out into the street at high noon and shoot it out with those boneheads."
This put into motion the debate-that-was-not, starting with Cameron calling Ann McElhinney, Marc Marono, and Andrew Breitbart requesting a debate at the AREDAY summit.
But as soon as they accepted, Cameron started backtracking. His list of demands for the debate can only be described as diva behavior, changing by the hour and becoming more restrictive every time. Ban cameras, ban audio, ban the media, ban the public.

We met every unreasonable demand. Yet, when it finally came time to sit down and discuss Global Warming the outspoken environmentalist turned tail and ran, canceling while one of the debaters, Marc Marono, was in flight. "The whole house of cards is falling! Well done, Jimmy! I'm beginning to doubt the existence of the Titanic," mocked Dennis Miller. 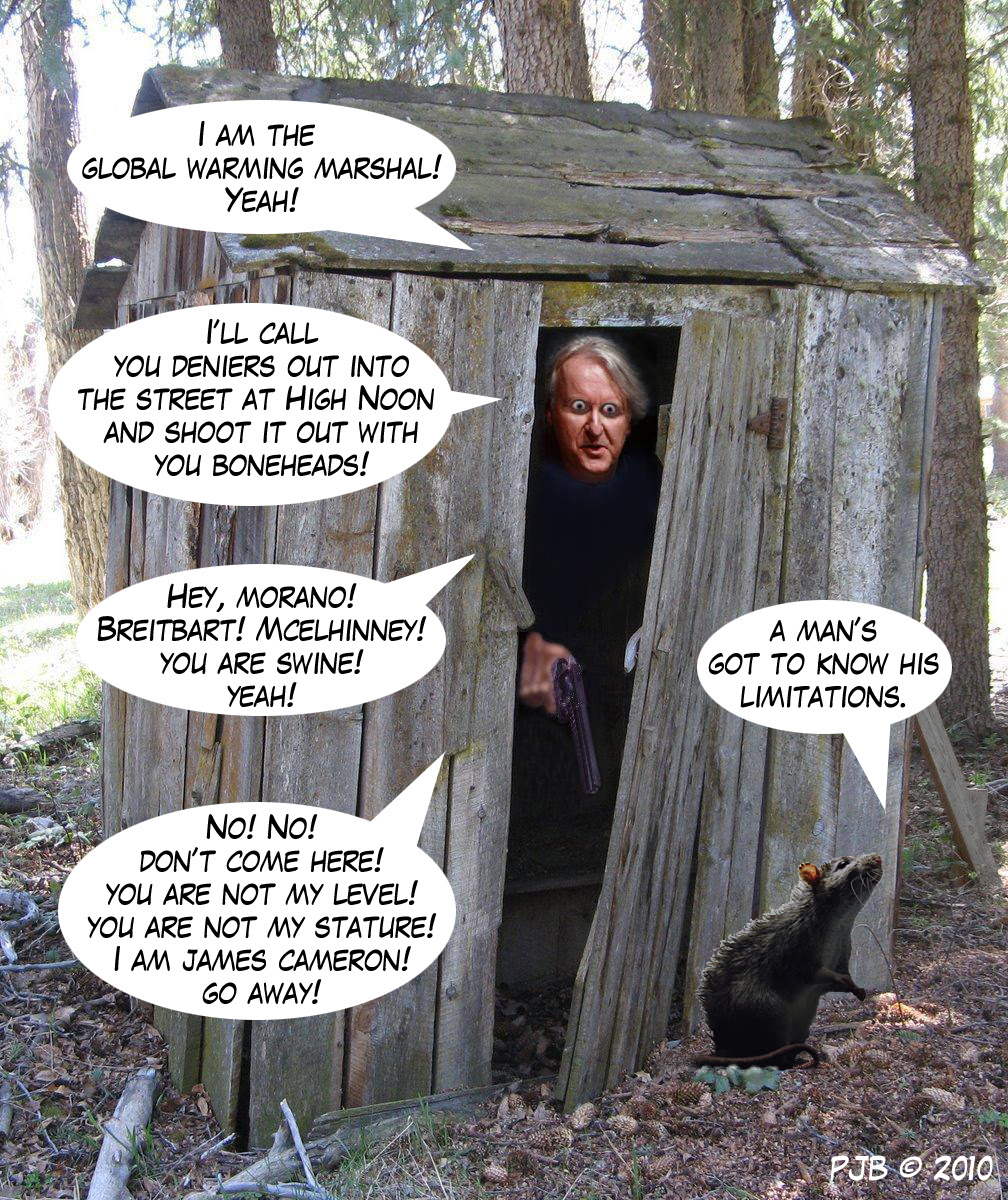 Jim Treacher, also from the Daily Caller, made sure to note the sheer insanity of the situation, and in terms the wannabe gunslinger would understand. "You shoulda seen the looks on them fact-rustlers’ faces when ol’ Killer Cameron bravely refused ta face ‘em. Then he called ‘em names behind their backs! Go ahead, say he’s yeller all ya want — cuz, well, that’s what he is — but he’s the one wearin’ the white hat, if’n ya really don’t think about it." -
After the name calling, Cameron screened a documentary, casting himself as the hero against an evil Brazilian electricity company "before jet-setting back to that carbon credit trader’s wet dream he calls a home" as Red State's Caleb Howe so aptly put it.
This turned out to be just the beginning of the circus. Hot Air was ahead of the curve, predicting the excuses Cameron's camp would pitch to the public, predicting Cameron would go with not wanting to "legitimatize skeptics."
Turns out Hot Air's expectations were too high and that Cameron's excuses boiled down to arrogance.
"Cameron is now claiming he canceled the climate debate at the last minute because I am not worthy to debate him. Cameron claims I have not achieved a 'stature in our society' that is 'similar to his.' Looks like I may have a long wait to rise to Cameron's level of environmental consciousness!" said Mark Marono, Climate Depot.
But you know what, we've become familiar with climate alarmists refusing to debate or answer questions. As Marono noted, "Cameron was given the standard Al Gore talking points, and he was repeating them..." It's too bad that Cameron is also taking cues from Gore's attitude toward hard questions.

We know we haven't heard the last of this story. Stay tuned, for the next installment in the Cameron No-Show.


NTS Notes: James Cameron calling for debate ONLY with people of his own "stature" is a slap in the face of everyone that knows the truth about Global Warming being a scam. How egotistical of him to think that he has higher "stature" than others and that Global Warming skeptics do not meet his standards!

Considering the fraud that Global Warming truly is, I am of the belief now that we should definitely not debate with a clown like James Cameron because he is well below our stature!

Posted by Northerntruthseeker at 2:09 PM

This man is unequivocally a fraud. The story for his movie Avatar is based off a book called Bishop's Gait. He has no standing to speak of because actually he is someone that was propped up. If you want proof as to actually how disgusting this individual is, read this blog.
http://bishopsgait.blogspot.com/2010/09/1000-thievery.html