From The Files Of Absurdity, Volume CXLIV: Criminal Ben Bernanke Asks For "Help" To Save US Economy!

The United States of America is right now on the verge of complete and total economic collapse.  The nation is embroiled in an un-winnable war in Afghanistan, and is presently about to do as its masters in Tel Aviv command, and launch a new un-winnable war against Iran.  The unemployment rate in the US is above 20% and rising with no hope of recovery in sight.   People are losing their homes, and are now living in tent cities across that once great nation.  Manufacturing in the US was off-shored over the last few decades, and the result is the US no longer builds anything, other than weapons, that can be sold to other nations.


The main reason why the US is in such bad shape is due to the massive DEBT that has ballooned over the last few decades and is now out of control.  That Federal debt stands at above the reported 13.3 TRILLION dollars that the US Government still officially states, but the real debt is obviously in the Hundreds of trillion dollars range.   The Federal debt was created when the US sold its soul in 1913 to private criminal bankers, and allowed the creation of the "Federal Reserve" system for the printing of the nation's currency at INTEREST!.   The present chairman of this criminal Federal Reserve System is none other than a criminal himself, Ben Bernanke....


Which brings me to my latest file in my "Files Of Absurdity" series.  It seems that the chairman of the criminal Federal Reserve, Ben Bernanke himself, according to this new article from www.guardian.co.uk, is actually having the audacity to ask for "help" from the US Government itself in saving the US economy!  This is absolutely outrageous, and here is that article for my own readers to ponder:

Ben Bernanke calls for help to revive the stuttering US economy

Ben Bernanke, chairman of the Federal Reserve, says the Fed needs help to revive the US economy. But it won't get any 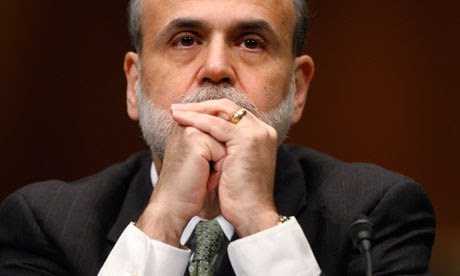 What did the chairman of the Federal Reserve say in Jackson Hole? According to much of the reaction, Ben Bernanke said the "Fed stands by to boost US growth" (FT), or that the "Fed is ready to prop up economy" (NYT) or even that the "Fed stands ready to support recovery" (WSJ).
In other news, a man was bitten by a dog. And by that I mean: the reverse would actually be news.
Yes, Bernanke said the Fed would act if the economic outlook deteriorated further, or if there were signs of deflation. He doesn't appear to think that either of those events are likely to occur, especially the deflation, but if they do, the Fed will do stuff. Which is exactly what you'd expect a modern central bank governor to say.
But what was missed was Bernanke's low-key plea for help - from the government.
Bernanke kicked off his Jackson Hole speech by detailing the problem the US faces, notably: "In many countries, including the United Statesand most other advanced industrial nations, growth during the past year has been too slow and joblessness remains too high."
He followed that by saying: "This list of concerns makes clear that a return to strong and stable economic growth will require appropriate and effective responses from economic policymakers across a wide spectrum, as well as from leaders in the private sector. Central bankers alone cannot solve the world's economic problems."
Now, appointed technocrats such as Fed chairmen have to avoid getting involved in politics. They can't come out and say "what the US economyreally needs is another fiscal stimulus passed by Congress", even if that's what they believe.Americans, more than the citizens of other advanced economies, are particularly spooked by the prospect of unemployment because, as theFT's Martin Wolf observes, "jobs are, in the US, the only safety net for those of working age." So consumers react to economic uncertainty by cutting back on spending and saving money or paying off debt. Bernanke noted: "Households, collectively, are even more cautious about the economic outlook and their own prospects than we previously believed."
To combat this there's only so much that can be done by monetary policy, the part of the economy under Bernanke's domain. There's anold joke that relying on monetary policy to run an economy is like playing golf with only one club. The missing club is of course fiscal policy.
The White House and Democrats could exploit Bernanke's plea by pushing for further fiscal stimulus and allowing monetary and fiscal policy to work in tandem. Given the fervour of Republican opposition, the chances of Barack Obama passing another stimulus package worth serious money – in the hundreds of billions of dollars – are non-existent, despite the fact that the bond market's appetite for buying US Treasuries means it could be cheaply financed. And once the Republicans take control of the House and possibly Senate after the 2010 midterm elections in November, the chances are less than zero. So the Fed is going to have to do all the heavy lifting by itself.
There's little the Fed can do that it's not doing already about the central problem of the US economy: its housing market. Some 29% of all houses with mortgages in the US are "under water" – that is, the resale value is less than the outstanding mortgage. That's a dead weight around the economy's throat but US policymakers mistakenly believe that the housing market's distress is a symptom and not a cause.
Bernanke thinks the housing market will pick up, if prices fall far enough and credit remains easy, but the problem there is that a further fall in house prices drags more mortgages under water, and puts off the day when house building starts adding new jobs to the economy.
In the meantime, Bernanke's Fed doesn't have much powder left in its locker, with monetary policy already extraordinarily easy. Earlier this week Alan Blinder, a former Fed official and a very smart economist,outlined steps the Fed could still take – all of which Bernanke ticked off in his Jackson Hole speech.
"The bad news is that the Fed has already spent its most powerful ammunition, only the weak stuff is left," Blinder warned. And he's right.
Bernanke, though, is also right that a durable recovery is underway. The prospects of a "double dip" into a second recession are far fetched. Unemployment remains weak but the jobs market always lags behind the rest of the economy.
The only surprise is that the economy has not recovered more quickly, based on its revival from previous slumps. But that, I believe, is because of the housing market, which has never seen such a dramatic collapse in the course of US history. Fixing that needs the "appropriate and effective responses from economic policymakers" that Bernanke is asking for.


It seems that the only way to help to save the US economy is for the Government to have the guts to end the debt immediately, end private banking printing of currency, and print their currency themselves debt and interest free.  However, considering how the criminals control the US Government itself, this will not happen unless the people themselves remove this criminal control, and those elected officials that are under that control,  from the US government!


I still cannot believe the nerve of this criminal in asking for help to save the economy that his own policies has destroyed.  It is beyond outrageous, and another sad chapter in my Files Of Absurdity indeed!


NTS
Posted by Northerntruthseeker at 9:08 PM