More Re-Writing Of History: Israel's Attack On Egypt During Six Day War Of 1967 Was NOT "Pre-Emptive"!

I have poured through tons of so called "History" books in my life. All the way through School, College, and University, I would spend time in libraries looking at history as written in our education system. Now it seems that most of our so called "recorded" history is nothing more than a pack of lies and falsehoods. More and more I have discovered that true history is kept out of books purposely for the ultimate goals of the criminals who are trying to shape our planet and society today for their bidding!
Now comes evidence that another piece of so called "recorded" history has to be sent to the garbage bin. According to this article, from www.foreignpolicyjournal.com, it seems that the Israeli attacks on Egypt at the beginning of its "Six Day War" in 1967 was absolutely NOT a pre-emptive strike but a diabolically planned strike to cripple Egypt so that Israel could roll over the Sinai Peninsula unopposed! Here is that article for my readers to view:

Israel’s attack on Egypt in June ’67 was not ‘preemptive’

It is often claimed that Israel’s attack on Egypt that began the June 1967 “Six Day War” was a “preemptive” one. Implicit in that description is the notion that Israel was under imminent threat of an attack from Egypt. Yet this historical interpretation of the war is not sustained by the documentary record.

The President of Egypt, then known as the United Arab Republic (UAR), Gamal Abdel Nasser, later conveyed to U.S. President Lyndon Johnson that his troop buildup in the Sinai Peninsula prior to the war had been to defend against a feared Israeli attack. 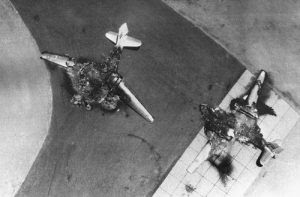 Israel's June 5, 1967 surprise attack on Egypt resulted in the obliteration of Egypt's air force while most of its planes were still on the ground.

In a meeting with Nasser, Johnson’s special envoy to the UAR, Robert B. Anderson, expressed U.S. puzzlement over why he had massed troops in the Sinai, to which Nasser replied, “Whether you believe it or not, we were in fear of an attack from Israel. We had been informed that the Israelis were massing troops on the Syrian border with the idea of first attacking Syria, there they did not expect to meet great resistance, and then commence their attack on the UAR.”

Anderson then told Nasser “that it was unfortunate the UAR had believed such reports, which were simply not in accordance with the facts”, to which Nasser responded that his information had come from reliable sources (presumably referring to intelligence information passed along by the USSR).

Nasser added that “your own State Department called in my Ambassador to the U.S. in April or May and warned him that there were rumors that there might be a conflict between Israel and the UAR.”

U.S. intelligence had indeed foreseen the coming war. “The CIA was right about the timing, duration, and outcome of the war”, notes David S. Robarge in anarticle available on the CIA’s website.

On May 23, Director of Central Intelligence Richard Helms presented Johnson with the CIA’s assessment that Israel could “defend successfully against simultaneous Arab attacks on all fronts … or hold on any three fronts while mounting successfully a major offensive on the fourth.”

In an document entitled “Military Capabilities of Israel and the Arab States”, the CIA assessed that “Israel could almost certainly attain air supremacy over the Sinai Peninsula in less than 24 hours after taking the initiative or in two or three days if the UAR struck first.”

Additionally, the CIA assessed that Nasser’s military presence in the Sinai was defensive, stating that “Armored striking forces could breach the UAR’s doubledefense line in the Sinai in three to four days and drive the Egyptians west of the Suez Canal in seven to nine days. Israel could contain any attacks by Syria or Jordan during this period” (emphasis added).

Although the Arabs had numerical superiority in terms of military hardware, “Nonetheless, the IDF [Israeli Defense Force] maintain qualitative superiority over the Arab armed forces in almost all aspects of combat operations.”

Johnson himself told the Israeli Foreign Minister, Abba Eban, “All of our intelligence people are unanimous that if the UAR attacks, you will whip hell out of them.”

Israel meanwhile claimed that it was “badly outgunned”, apparently presuming, Robarge writes, “that Washington accorded its analyses such special import that US leaders would listen to its judgments on Arab-Israeli issues over those of their own intelligence services.”

Yet “Helms had the Office of National Estimates (ONE) prepare an appraisal of the Mossad assessment”, which stated: “We do not believe” that the Israeli claim of being the underdog “was a serious estimate of the sort they would submit to their own high officials.”

Neither U.S. nor Israeli intelligence assessed that there was any kind of serious threat of an Egyptian attack. On the contrary, both considered the possibility that Nasser might strike first as being extremely slim.

The current Israeli Ambassador to the U.S., Michael B. Oren, acknowledged in his book “Six Days of War“, widely regarded as the definitive account of the war, that “By all reports Israel received from the Americans, and according to its own intelligence, Nasser had no interest in bloodshed”.

In the Israeli view, “Nasser would have to be deranged” to attack Israel first, and war “could only come about if Nasser felt he had complete military superiority over the IDF, if Israel were caught up in a domestic crisis, and, most crucially, was isolated internationally–a most unlikely confluence” (pp. 59-60).

Four days before Israel’s attack on Egypt, Helms met with a senior Israeli official who expressed Israel’s intent to go to war, and that the only reason it hadn’t already struck was because of efforts by the Johnson administration to restrain both sides to prevent a violent conflict.

“Helms interpreted the remarks as suggesting that Israel would attack very soon”, writes Robarge. He reported to Johnson “that Israel probably would start a war within a few days.”

“Helms was awakened at 3:00 in the morning on 5 June by a call from the CIA Operations Center”, which had received the report “that Israel had launched its attack” and that, contrary to Israel’s claims that Egypt had been the aggressor, Israel had fired first.

Yitzhak Rabin, who would later become Prime Minister, told Le Monde the year following the ’67 war, “I do not think Nasser wanted war. The two divisions he sent to the Sinai would not have been sufficient to launch an offensive war. He knew it and we knew it.”

Israeli Prime Minister Menachem Begin acknowledged in a speech in 1982 that its war on Egypt in 1956 was a war of “choice” and that, “In June 1967 we again had a choice. The Egyptian army concentrations in the Sinai approaches do not prove that Nasser was really about to attack us. We must be honest with ourselves. We decided to attack him.”

Despite its total lack of sustainability from the documentary record, and despite such admissions from top Israeli officials, it is virtually obligatory for commentators in contemporary mainstream accounts of the ’67 war to describe Israel’s attack on Egypt as “preemptive”.

NTS Notes: Well, there you have it... Another piece of so called "historical fact" put into the shredder!
It seems that history again has been purposely distorted so that the Zionist state of Israel looks like an innocent victim when it is absolutely not. Israel has always had a vision of a "Greater Israel" where they would have total hegemony and control of the region from the Nile River all the way to the Euphrates in Iraq. The attack against Egypt at the beginning of the 6 Day War in 1967 was absolutely pre-planned and premeditated! The term "Pre-Emptive" strike in this situation is therefore an outright lie.
Our Zionist Jewish controlled media including our education and history books has always painted a false picture of the "small and weak" country of Israel surrounded by evil Arab nations bent on its "destruction". That lie has to be stopped and the truth must be known that Israel is absolutely NOT a "weak nation" and is in fact a criminal nation bent on seizing territory by force from its neighbours to attain its evil dream of a "Greater Israel". The truth must be told!
More to come
NTS
Posted by Northerntruthseeker at 9:34 PM