The Coming Economic Collapse: 50 Random Facts That Make You Wonder What In The World Has Happened To America!

I have just finished a short "vacation". A few days of R and R are important to recharge the batteries and just to get away from all of the troubles and issues that are happening in the world around us. But it is now back to the business at hand....
I came across the following article from a website: www.theeconomiccollapseblog.com, and I found its facts to be very intriguing and very factual. It is called "50 Random facts that make you wonder what in the world has happened to America", and I am enclosing that article here for my own readers to view right here: 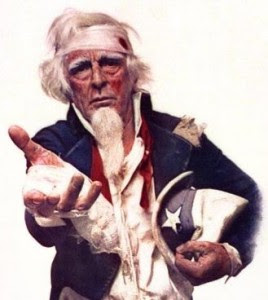 Our world is changing at a pace that is so staggering these days that it can be really hard to fully grasp the significance of what we are witnessing. Hopefully the collection of random facts below will help you to "connect the dots" just a little bit. On one level, the facts below may not seem related. However, what they all do have in common is that they show just how much the United States has fundamentally changed. Do you ever just sit back and wonder what in the world has happened to America? The truth is that the America that so many of us once loved so much has been shattered into a thousand pieces. The "land of the free and the home of the brave" has been transformed into a socialized Big Brother nanny state that is oozing with corruption and has accumulated the biggest mountain of debt in the history of the world. The greatest economic machine that the world has ever seen is falling apart before our very eyes, and even when our politicians actually try to do something right (which is quite rare) the end result is still a bunch of garbage. For those who still love this land (and there are a lot of us) it is heartbreaking to watch America slowly die.

The following are 50 random facts that show just how dramatically America has changed....

#50) A new report released by the United Nations is publicly calling for the establishment of a world currency and none of the major news networks are even covering it.

#49) The state of California is so broke that Arnold Schwarzenegger has ordered California State Controller John Chiang to reduce state worker pay for July to the federal minimum allowed by law -- $7.25 an hour for most state workers.

#48) A police officer in Oklahoma recently tasered an 86-year-old disabled grandma in her bed and stepped on her oxygen hose until she couldn't breathe because they considered her to be a "threat".

#47) In early 2009, U.S. net national savings as a percentage of GDP went negative for the first time since 1952, and it has continued its downward trend since then.

#46) Corexit 9500 is so incredibly toxic that the UK's Marine Management Organization has completely banned it, so if there was a major oil spill in the North Sea, BP would not be able to use it. And yet BP has dumped over a million gallons of dispersants such as Corexit 9500 into the Gulf of Mexico.

#44) It has come out that one employee used a Federal Emergency Management Agency credit card to buy $4,318 in "Happy Birthday" gift cards. Two other FEMA officials charged the cost of 360 golf umbrellas ($9,000) to the taxpayers.

#43) Researchers at the State University of New York at Buffalo received $389,000 from the U.S. government to pay 100 residents of Buffalo $45 eachto record how much malt liquor they drink and how much pot they smoke each day.

#42) The average duration of unemployment in the United States has risen to an all-time high.

#41) The bottom 40 percent of all income earners in the United States now collectively own less than 1 percent of the nation’s wealth.

#40) In the U.S., the average federal worker now earns about twice as much as the average worker in the private sector.

#37) The federal government actually has the gall to ask for online donations that will supposedly go towards paying off the national debt.

#36) The Cactus Bug Project at the University Of Florida was allocated $325,394 in economic stimulus funds to study the mating decisions of cactus bugs.

#35) A dinner cruise company in Chicago got nearly $1 million in economic stimulus funds to combat terrorism.

#34) It is being reported that a 6-year-old girl from Ohio is on the "no fly" list maintained by U.S. Homeland Security.

#33) During the first quarter of 2010, the total number of loans that are at least three months past due in the United States increased for the 16th consecutive quarter.

#32) According to a new report, Americans spend twice as much as residents of other developed countries on healthcare, but get lower quality and far less efficiency.

#31) Some experts are warning that the cost of bailing out Fannie Mae and Freddie Mac could reach as high as $1 trillion.

#30) The FDA has announced that the offspring of cloned animals could be in our food supply right now and that there is nothing that they can do about it.

#29) In May, sales of new homes in the United States dropped to the lowest level ever recorded.

#27) Federal border officials recently said that Mexican drug cartels have not only set up shop on American soil, they are actually maintaining lookout bases in strategic locations in the hills of southern Arizona.

#26) The U.S. government has declared some parts of Arizona off limits to U.S. citizens because of the threat of violence from Mexican drug smugglers.

#25) According to the credit card repayment calculator, if you owe $6000 on a credit card with a 20 percent interest rate and only pay the minimum payment each time, it will take you 54 years to pay off that credit card. During those 54 years you will pay $26,168 in interest rate charges in addition to the $6000 in principal that you are required to pay back.

#22) Four of the biggest U.S. banks (Goldman Sachs, JPMorgan Chase, Bank of America and Citigroup) had a "perfect quarter" with zero days of trading losses during the first quarter of 2010.

#20) BP has hired private security contractors to keep the American people away from oil cleanup sites and nobody seems to care.

#19) Barack Obama is calling for a "civilian expeditionary force" to be sent to Afghanistan and Iraq to help overburdened military troops build infrastructure.

#18) On June 18th, two Christians decided that they would peacefully pass out copies of the gospel of John on a public sidewalk outside a public Arab festival in Dearborn, Michigan and within 3 minutes 8 policemen surrounded them and placed them under arrest.

#17) It is being reported that sales of foreclosed homes in Florida made up nearly 40 percent of all home purchases in the first part of this year.

#16) During a recent interview with Larry King, former first lady Laura Bush revealed to the world that she is actually in favor of legalized gay marriage and a woman's "right" to abortion.

#15) Scientists at Columbia University are warning that the dose of radiation from the new full body security scanners going into airports all over the United States could be up to 20 times higher than originally estimated.

#13) The FDIC's deposit insurance fund now has negative 20.7 billion dollars in it, which represents a slight improvement from the end of 2009.

#12) The judge that BP is pushing for to hear an estimated 200 lawsuits on the Gulf of Mexico oil disaster gets tens of thousands of dollars a year in oil royalties and is paid travel expenses to industry conferences.

#11) In recent years the U.S. government has spent $2.6 million tax dollarsto study the drinking habits of Chinese prostitutes and $400,000 tax dollars to pay researchers to cruise six bars in Buenos Aires, Argentina to find out why gay men engage in risky sexual behavior when drunk.

#10) U.S. officials say that more than three billion dollars in cash(much of it aid money paid for by U.S. taxpayers) has been stolen by corrupt officials in Afghanistan and flown out of Kabul International Airport in recent years.

#9) According to a report by the U.S. Department of Transportation's Bureau of Transportation Statistics, the baggage check fees collected by U.S. airlinesshot up 33% in the first quarter of 2010 to $769 million.

#8) Three California high school students are fighting for their right to show their American patriotism - even on a Mexican holiday - after they were forced to remove their American flag T-shirts on Cinco de Mayo.

#7) Right now, interest on the U.S. national debt and spending on entitlement programs like Social Security and Medicare are somewhere in the neighborhood of 10 to 15 percent of GDP. By 2080, they are projected to eat up approximately 50 percent of GDP.

#6) The total of all government, corporate and consumer debt in the United States is now about 360 percent of GDP.

#5) A 6-year-old girl was recently handcuffed and sent to a mental facility after throwing temper tantrums at her elementary school.

#4) In Florida, students have been arrested by police for things as simple as bringing a plastic butter knife to school, throwing an eraser, and drawing a picture of a gun.

#3) School officials in one town in Massachusetts are refusing to allow students to recite the Pledge of Allegiance.

#2) According to one new study, approximately 21 percent of children in the United States are living below the poverty line in 2010.

#1) Since 1973, more than 50 million babies have been murdered in abortion facilities across the United States.

NTS Notes: Lets face the facts... America today is a mess, and it is definitely on the verge of total economic collapse. There is almost no manufacturing base left due to greedy corporations rapidly off shoring all manufacturing to third world nations in pursuit of cheap labour. The US is involved in two major wars at present in the Middle East that have no end in sight, and a third against the innocent country of Iran is just around the corner. The American national debt level is now greater than the entire value of all assets in the United States itself, and therefore can never be paid off under the present criminal banking system.
I have been asked recently if the only hope left for America is a new revolution, and I seriously now believe that is the only way that the criminals that created the mess in the first place can be removed from power and then the country can be put back on the right track towards rejuvenation. Sadly, there seems to be no other alternative available in healing that once great nation.
More to come
NTS
Posted by Northerntruthseeker at 10:56 PM