UN Votes For New Round Of "Sanctions" Against An Innocent Iran!

It was only a matter of time before the UN would show exactly who is in control of their organization, and who actually controls the UN Security Council. Their failure to get a condemnation of Israel's massacre of innocent humanitarian workers, thanks to the puppet nation of Israel; the United States, was indeed bad enough but now according to the following article from www.dailymail.co.uk, it seems that the Israelis and their puppets in the United States have now convinced the UN Security Council to vote for a new round of sanctions against Iran for their so called refusal to drop their "Nuclear Programme." Here is that article:

The United Nations today approved a fourth round of sanctions against Iran over a nuclear program Western powers suspect is aimed at developing atomic weapons.

There were 12 votes in favour of the resolution. Lebanon abstained while Turkey and Brazil voted against it.

Just hours earlier the U.S., Russia and France had earlier dismissed a proposal by Iran to swap some of its enriched uranium for reactor fuel, diplomats said. 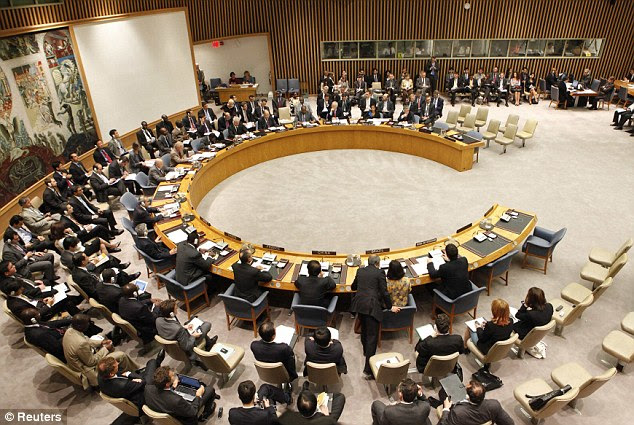 In progress: The U.N. Security Council begins its crucial Iran sanction meeting in New York today. The council approved a fourth round of sanctions against Iran over a nuclear program

The three diplomats familiar with the replies said they contain a series of questions that would have in effect stalled any negotiations on the issue - and generally diminished any chance of talks because they present Tehran with indirect demands that it is not ready to meet.

The International Atomic Energy Agency confirmed receipt of the three-nation response and said it would be passed on to Tehran.

The U.S., Russia and France have said that - unlike the original plan drawn up eight months ago - the swap proposal negotiated by Brazil and Turkey would leave Iran with enough material to make a nuclear weapon. And they noted that Iran intends to continue a new program of enriching uranium to a higher level.

The reply by the three nations was confidential. But Glyn Davies, the U.S. chief representative to the International Atomic Energy Agency, appeared to outline those U.S., French and Russian problems with it in comments to a 35-nation meeting of the IAEA board.

Beyond that, he said Iran appeared 'determined to defy and to obfuscate' international attempts to probe its nuclear program for suspected attempt to make nuclear weapons.

'The fundamental issue remains: Is Iran willing to met its international non-proliferation obligations, build international confidence, and enable the IAEA to provide assurances as to the peaceful nature of its nuclear program?' he said in comments to the closed session made available to reporters.

'The (IAEA) director general has told us that Iran is preventing the IAEA from doing so.'

A European Union statement also criticised Iran for stonewalling attempts to probe its nuclear activities and refusing to heed U.N. Security Council demands for a freeze on enrichment, which can make both nuclear fuel and fissile warhead material.

But his Iranian counterpart, Ali Asghar Soltanieh told the meeting that 'illegal resolutions' by the council will not stop his country from exercising its 'legitimate right to develop its nuclear program'.

She said: "I think it is fair (to say) that these are the most significant sanctions that Iran has ever faced.

'The amount of unity that has been engendered by the international community is very significant.'

In the final version of the U.N. resolution, sanctions will be tougher than previous penalties but still far short of crippling economic punishments or an oil embargo.

The sanctions would ban Iran from pursuing 'any activity related to ballistic missiles capable of delivering nuclear weapons', bar Iranian investment in activities such as uranium mining, and prohibit Iran from buying several categories of heavy weapons including attack helicopters and missiles.

Annexes to the resolution would target 40 new Iranian companies or organisations, including 15 linked to Iran's powerful Revolutionary Guard.

Following the resolution's approval, the number of entities under sanctions has more than doubled from 35 to 75.

Read more: http://www.dailymail.co.uk/news/article-1285330/U-N-approves-new-sanctions-Iran-Turkey-Brazil-voting-resolution.html?ITO=1708&referrer=yahoo#ixzz0qPz4XjFv
NTS Notes: Now lets try this again.... Iran is building nuclear reactors for electrical power for its people. Nuclear reactors require nuclear fuel that is enriched to well under the 10% purity mark. Iran has enriched their fuel to well below that mark for their nuclear reactors. The Iranians do not possess the capability of enrichment of Uranium to bomb grade purity, which requires over 90% purity! The Iranians can not ever reach that level of enrichment for years to come, and that is fact. Also, they have asked for and obtained an enrichment agreement for their nuclear fuel with Turkey and Brazil to satisfy any IAEA rules, laws, and inquiries about their programme. That agreement was ready to go forward, but appears now to have gone by the wayside by this new outrageous sanction agreement.
Iran has been bending over backwards to accept any rules and regulations about their nuclear fuel needs, and yet the US and Israel still want their nice little war against that innocent country to go ahead as planned. The world turns its back again on the fact that Israel that has never signed the NPT treaty and never allows IAEA inspection of their criminal and clandestine Nuclear Weapons program. And thus again people overlook the hundreds of nuclear weapons in Israel's arsenal. The hypocrisy continues!
The idea of these sanctions against an innocent country like Iran is absolutely revolting. The Iranians have not done anything illegal, and have been actually in full compliance with all IAEA regulations and laws. This passing of sanctions shows again who exactly rules the planet, and how even organizations like the UN are powerless to stand up to their criminality.
The phony claim in this article that Iran is trying to build a nuclear weapon has already been proven again and again to be ridiculous and ludicrous. But again, it is the media stretching, distorting, and outright lying, to try to make Iran the next "threat" to the world. The Mail is just proving by this article to be another propaganda news site that avoids the real truth about Iran.
Is there any silver lining for Iran and the world in this? Believe it or not.... Yes...Thanks to the Russians and the Chinese actually voting to accept a new round of sanctions against Iran, the United States and their masters in Israel, now cannot justify to the entire world launching their precious war against Iran without letting the so called sanctions actually take time to work first. I am wondering if the Israelis and their American puppets were hoping that the Russia and China would have voted against the sanctions so that they could somehow justify the irrelevance of the UN itself, and therefore could have found the excuse for getting their nice new war against Iran going sooner?.... The actual period for these sanctions to take effect against Iran may be months, if not a year. Iran will survive in the meantime because it has not been hit by any economic sanctions and will most probably find ways around these new sanctions, definitely.
Now for the foreseeable future the focus of the entire planet can shift back to the collapsing economies, Israel's clandestine Nuclear Weapons programme, the illegal blockade of Gaza and the Humanitarian relief efforts to break that illegal blockade, Israel's continuing massacre of innocent people, and the total control of the United States by the criminal state of Israel.
It will have to be the efforts of the blogosphere and real truthful news sources that will show that Iran is not the threat that is perceived in the Zionist Jewish controlled MSM, and show that the real threat is the criminal state of Israel, and their puppets in the United States. Let us, readers, be the sources of the real truth.
More to come
NTS
Posted by Northerntruthseeker at 10:51 PM