The War In Afghanistan: The REAL War Going On!

In this article, I will focus on the Opium drug trade, and exactly what the war in Afghanistan is really about. Some of the facts may alarm some readers, but the revelations are truly shocking!
When the Taliban were destroying the Poppy Fields, and executing the drug lords during the 1990's, the world supply of Opium was falling to very low levels, and the PRICE for both the Opium and its refined drug, Heroin were skyrocketing. This makes sense because of basic supply and demand. But is there something more? It seems that the Zionist drug lords want to control the Opium from Afghanistan due to its high quality and therefore its powerful addictive effect on the actual drug users. The obvious reason for the invasion of 2001 was to secure the Afghan Opium fields and to get the high quality Afghan Opium flowing to markets around the world to drive the poorer quality Heroin suppliers out of business, and make the thousands of Heroin users totally dependant on the Afghan Heroin!
Here are some interesting pictures that show the obvious reason why American and NATO forces are in Afghanistan: 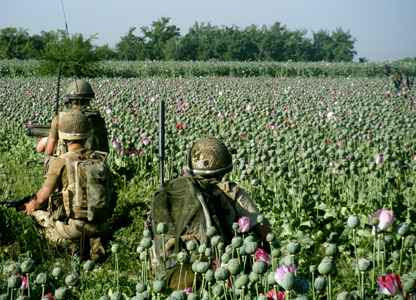 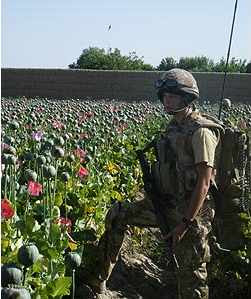 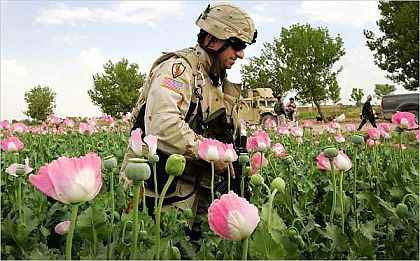 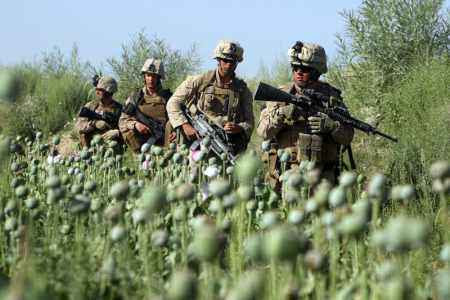 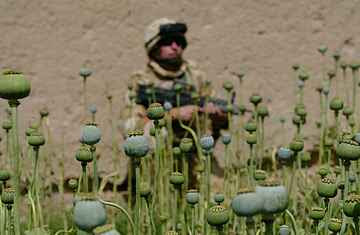 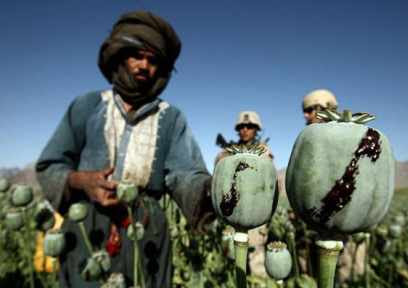 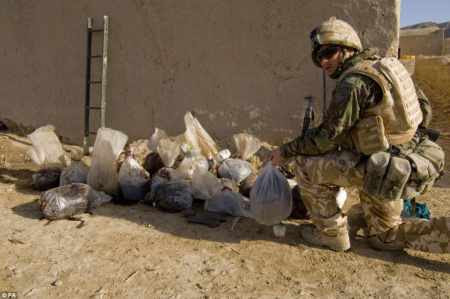 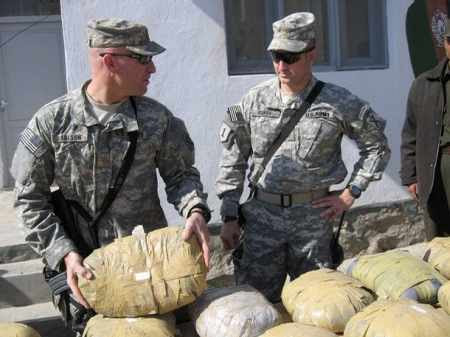 In Afghan fields the poppies grow.

Row on row.
Now for some interesting speculation.... What if the invasion served a two fold mission? One was to secure the fields... But the SECOND and more important purpose was to flood the world markets with the Afghan derived Opium and Heroin to create a massive increase of Afghan Heroin addicts around the world. It does make sense, because once a population becomes addicted to that higher quality Heroin, then it would only be a matter of restricting the supply ( or controlling it outright), and the PRICE immediately rises for supplies! Is this not a strong possibility of exactly what the Zionist game is all about? Make thousands upon thousands of new Heroin addicts on CHEAP Afghan Heroin, and then once they are addicted enough, pull the cheap supply and hyper inflate the price to these dependant addicts!
That speculation may not be too surprising at all, because I came across an article through the Boston Online news service at www.bostonchannel.com, that clearly states that there is a massive upswing in the amount of Heroin addicts in the Boston area of the United States alone fully addicted to a sudden surge in CHEAP Heroin!
Here is the article:

BOSTON -- A lethal combination of rock bottom prices combined with a spike in the potency and availability of heroin on Massachusetts streets has led to a startling increase in the number of heroin-related deaths in recent years.NewsCenter 5’s Bianca de la Garza reported Tuesday that the state’s heroin crisis has spread from inner cities to tranquil suburbs.
Click To Comment |

Low Price, High Potency Spike Heroin Deaths
“It just makes you think you’re nothing,” said Maureen Coppinger, a recovering heroin addict. “It took everything from me.""It’s ruined everything," said Sarrie Meggison, another addict now seeking treatment along with Coppinger at Project Cope in Lynn.Addicts and drug enforcement officials share the same enemy – a surge in the strength and accessibility of heroin.“It's actually our No. 1 priority,” said Special Agent Steven Derr of the federal Drug Enforcement Agency. “You can go out for $10 and get a bag of heroin. I don't think the future is particular bright."The new mission, according to Derr, is to stop the flow of heroin from Colombia to New England streets. That’s where Coppinger and Meggison found heroin, and soon got hooked."I've gone to over 30-something detoxes," said Meggison.Coppinger added, “The drug makes you think you’re worthless, you're better off dead, you’re better off without your family."“The heroin we saw today is not the heroin we saw 20-25 years ago,” said Derr. “It’s much, much, much stronger. Even the first time they are using it, it’s too strong for them."And that may explain, in part, the state’s recent sharp rise in opoid-related overdose deaths. In 1996, there were 178. A decade later, the number of fatal overdoses had more than tripled to 637 – killing more people than motor vehicle accidents."Don't assume it’s just the cities, don't blame the cities. It’s everywhere," said Salisbury Police Chief David L'Esperance.For L'Esperance, who became chief three years ago, the fight against heroin is personal. His 20-year-old son, Christopher, died of an opoid overdose two years ago.“He was a great kid until he got into that. Then it all changed,” he said. “There is no stereotype for this, that is what people have to understand."It’s something recovering addicts know firsthand. Both said they are thankful to be alive, but heroin has left a permanent mark on them."It got to the point last year where I wanted to die,” said Coppinger. “You don't care if you live or die, it’s that bad I really truly want to die."“I had the house, the family, a job," said Meggison. “This isn’t a joke,” said Coppinger. “For young kids going out and experimenting, really think before you do things."Local and federal law enforcement told NewsCenter 5 they agree that rehab is critical for people battling heroin.

Copyright 2009 by TheBostonChannel.com. All rights reserved. This material may not be published, broadcast, rewritten or redistributed

NTS Notes: Notice this article states clearly the rise in "High Potency" Heroin on the streets of Boston, Massachusetts! Where do you think they are getting this high potency Heroin? It is coming in from Afghanistan!!! Therefore, my reasoning as to the true purpose for the war in Afghanistan is probably very close to the truth. Think about it, Readers? Why not flood the market for a while with cheap Afghan Heroin, and then after thousands of people are addicted to their drugs, as the primary supplier they will artificially restrict the supply! The immediate result would be a shortage of supply and the sudden massive, if not astronomical, rise in price! The profits to these Zionist Rothschild drug lords would also be astronomical! Is this not a possibility of their sick and deadly game, and why they have their minions in Afghanistan to protect THEIR Poppy fields?
We need to end the farce of that war in Afghanistan to end, and to get our troops home, now! If we stop the Opium flow out of that country, then these criminals can be stopped.
More to come
NTS
Posted by Northerntruthseeker at 10:39 PM

A note from personal experience. First yes you are right. I have been aware of this for along time. However, the drug is still only one facet of the useless war, there are many other factors.

Everything you say is correct, and I also recall reading an interview with a Canadian soldier telling why he did not re-enlist and one of his reasons was that he got tired of guarding poppy fields.

In the late 1960's just as the hippie movement was in its last years as a rotted out destroyed movement, "the scene" in Toronto was flooded with cheap heroin. Up until then it was pot, hash, psychedelics, methamphetamine.

I was not as I am now and was very involved in the culture, but still hoping for good to return to what had begun with such high spirits *I thought at the time*.

The stuff cost $6 for a horsecapsule, which was incredibly cheap. Incredibly cheap. I did not inject, ever, but still partook of this delicious treat a few times. And, yes, it was amazing to experience. Then a few weeks later what was so easy to find, was gone. $6 was now $19 and much harder to locate.

I woke up one day with a minor craving for that special place it took me but after spending 5 hours trying to track some down, my common sense kicked in and I realized, looking that long for something was very unhealthy and I stopped, the end of my involvement.

If I had injected, it would have been almost impossible to control by then I am sure. However, not so others. Over the next few years, heroin addiction in Toronto really blossomed, crime went up, etc etc etc.

This is what they also did to win control over China. The Golden Triangle and opium were all nicely balanced and opium was used as the lord created it, to ease the pain of the dying. Sure there were addicts but not so many. The British created a huge addiction among the Chinese, as a means of destroying the culture and gaining a power hold in the country. It worked.

The opium of India, the Golden Triangle, and now Afghanistan are important to these high level thugs. Meanwhile it is also a main source of income for the farmers and the drug lords. Yet often children and women more or less slaves do most of the harvesting.

The "god" of these creatures are
Gold ~ Oil ~ Drugs.

I think it is time to pull up some of my older posts on how they were breaking the soul of America because it seems to me one of the things was to leave people with no work, feeling invalidated, and turning these lost people into addicts and or drunks. Yep, your theory is bang on, my friend.

We also know, I have old articles, involving the CIA drug involvements in great detail. BTW names figuring largely in there were Cheney and Busch. GW had a coke problem at one point early in his presidency.

Mr. Clinton was known for having the nose available for the biggest and most frequent intake in Arkansas. Again I forget the details but the Clintons made a fortune in the coke trade when Bill was Governor.

Back to heroin. Those occasional stories we get of fields being torn apart by our troops? Usually they have been fields already harvested and ready for tilling and replanting.

You did not think there was war in Viet Nam or Cambodia just to save the people from communism did you? Again, opium.

OK I just found a post I put up in 2007 and it covers the opium aspect lightly. It is 10 things they did not tell Canadians about why we were in Afghanistan. Maybe it needs to be reposted. Smile.

Excellent piece. Yours I mean.. LOL.