Breaking News: German Doctor Arrested For Simply Trying To Make Youtube Video That Attacks The COVID-19 Fraud - Our Very Freedom Of Speech Now In Danger Thanks To This Fraud!

I want to start this article by giving everyone an update on what has just happened here in my home province of Manitoba.. The fucking scumbag in charge, that heinous Brian Pallister and his fraudulent head 'doctor' criminal bastard running the COVID-19 scam in Manitoba, Brent Roussin, have just decided to lock down Manitobans even further and basically throw away the key!

Here are some of the details of what these pricks are now doing to Manitobans; Starting tonight at midnight CST, homeowners are NOT allowed to have ANYONE in their homes in all of Manitoba other than ONE extra person, who can be either a relative or someone doing contract/repair work... This is obviously being done by these fucking pricks to try to destroy CHRISTMAS for anyone here in Manitoba to prevent gatherings... And of course they are also doing this to prevent any resistance to their entire criminality!

AND starting at midnight tonight, these bastards are stopping ALL sales of what they deem as 'non-essential goods'... This means that ANYONE out there after tonight wanting to buy anything that is NOT a food item or what they claim are 'essential' can not... I looked at their list of 'non-essential goods' and I have to ask the question as to WHY??  Non-essential goods do not carry this bullshit virus, so WHY??  It does appear that the Pallister criminals are now going out of their way to DESTROY every business here in Manitoba and also ruin Christmas in the process.... And where the fuck is the outcry in this travesty??

OK, I have fumed enough about the hell that the criminal pricks are doing to Manitoba... Sadly the citizens here will simply bend over and take this criminal nonsense as most are now too stupid to live and are living their lives in phantom fear thanks to the never ending propaganda from the liars in the Jewish controlled media outlets.... I say that if there ever was a time for RESISTANCE here, these criminal actions to destroy the lives of Manitobans has to be the catalyst for that movement...

Well, Onto the subject at hand... I was sent a ghastly report earlier today from several emails showing a 'Twitter' feed where a brave doctor named Dr Andreas Noack in Germany was at his residence preparing to make a Youtube video about the scam-demic in Germany, only to have the German thought police come rushing in to have him arrested on the FRAUD charges of some ludicrous "Infection Protection Law" that the brutal German authorities had just passed less than the day before.... I do want to present what I think is the best coverage of this atrocity and outrage that comes courtesy of my fellow Canadian real truth seeker, Greencrow, who hails from the wilds of southern British Columbia and writes her blog "Greencrow As The Crow Flies" at www.greencrowasthecrowflies.blogspot.com... Here is that informative article here, and of course I have my own thoughts and comments to follow: 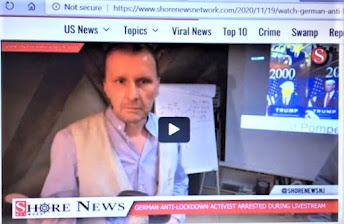 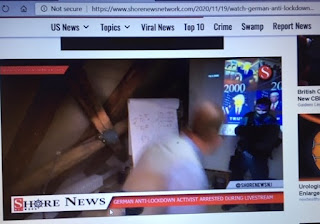 Policeman points gun at Dr. Andreas Noack
and orders him to the floor 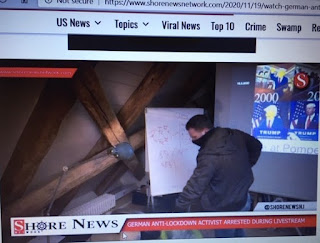 Other police officers arrive and
take Dr. Andreas Noack away 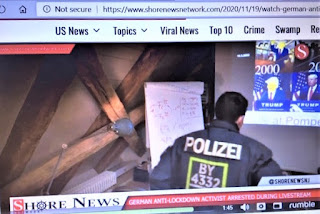 Policeman finally shuts off Recording Device
HERE'S THE LINK TO THE VIDEO OF Dr. Andreas Noack BEING ARRESTED IN HIS OWN HOME WHILE LIVESTREAMING A VIDEO...THIS IS THE END GAME, FOLKS!

Folks, this is shocking!  RAH just sent me a link to a video of Dr. Andreas Noack, a German Activist, being arrested in his own home while live-streaming a video about the lockdown.  This could be happening to any of us soon!  Thanks RAH...you da man!

GERMANY – It’s not yet known why, but a German doctor known for providing medical assistance to protesters during that country’s lockdown protests was arrested while live-streaming yesterday.  Dr. Andreas Noack was rumored to be under investigation for not complying with German COVID-19 lockdown laws, but some speculate there could be more to it.   The arrest came after the German Parliament passed the “Infection Protection Law’

During the live stream, police can be heard banging on the door at the location where Noack was broadcasting.  “It’s the police,” said a man off-camera.  Then police entered the building forcing Noack to the ground before turning off his livestream.

Greencrow says:  Whew!  This was quite the morning.  Three posts and the last one Breaking News.  Folks...it's not done in vain.  My readership on this blog has exploded and all the posts...even those left in the dust of newer ones...get very high readership.  So, don't forget to scroll down and see the older posts which, in fact, are quite recent.  Love you guys wherever you are..and particular kudos to my intrepid "cub" reporters [and these guys are REAL reporters] FreakedOut and RAH.
Posted by greencrow at 11:24 AM

NTS Notes: To me, this is an outrage and a definite attack on free speech and the rights of an individual to their own sanctity in their own homes...

And I too want to thank "RAH" for his input for Greencrow's article as well...

Lets face reality here... This is only the beginning as these pricks want to suppress and destroy every type of opposition to their criminal acts and their push now to have everyone on planet EARTH destroyed via their heinous 'vaccines'....   It could only be a matter of time before real truth seekers such as myself, Greencrow, and others, are also brutally suppressed and arrested for simply trying to tell the truth and awaken the masses..

I will be following this report to find out what happens with Doctor Andreas Noack... I do hope he does get either released very soon, or I can guarantee he will see a 'fair' trial much like that kangaroo court in Germany that did such a bang up job with Monika Schaefer and her brother Alfred Schaefer....  We shall soon see..

Posted by Northerntruthseeker at 5:48 PM

Thanks for reposting this glimpse into our future in The Great Reset. I am shocked and appalled to hear what has happened in Manitoba. This is criminal...based on few if any "cases" and "deaths"...all the CovID diagnoses based on the fraudulent use of the PCR test.

It is simply a criminal effort to "break the will" of the people in the run up of even more heinous assaults on our bodies, souls and minds!

This latest arrest is a FUCKING OUTRAGE too far.

The German police caught carrying out the dastardly deed on camera are likely descendants of Gestapo or Stasi officers who should have learned something from history.

Sadly, these criminal scum think they can arrogate to themselves God-like powers to detain all humanity.

It's high time we in the resistance thought long and hard about tactics. We have long passed the time when civil disobedience or mass demonstrations can realistically make any difference at all.

Here in the UK we had a German doctor arrested at Speakers Corner during the mass anti-lockdown protest in Trafalgar Square. More recently, a 19 year old girl was arrested and held for 24 hours for simply addressing a small anti-lockdown crowd in a town centre in Devon and Cornwall. Another guy was muscled to the floor by police as he came out of a gym that had remained open after the latest lock-down orders. We have police breaking up church services, weddings and funerals.

Either we FIGHT BACK now or say a final farewell to any vestige of freedom for the hereafter.

I think it's clear now that we are going down with the sheeple. They'll be vaccinated to death while we ROT in the COVID camps.