Canadian Federal Election: Evil And Sinister Chrystia Freeland Gets Roasted At Town Hall For Being A Warmonger!

Readers to this blog are well aware by now about how I have been blasting that horrific Justin Trudeau and his criminal Liberal party constantly since even before he called a federal election up here in Canada slated for this coming October 21st..... I have laid it out clearly that I honestly do not give a crap about what Trudeau did some 18 years ago, as other Canadians should as well... The REAL issues should be how Justin Trudeau has basically ruined this nation for the last 4+ years since most Canadians gullibly and stupidly elected him as our Prime Minister.....

BUT what has been worrying me has been the how and the why the Jew spew media has suddenly dredged up Justin Trudeau going "black face" at a party almost 2 decades ago?    It does appear that the heinous Liberals and their Jewish controllers are actually contemplating having Justin 'removed' from the leadership of the Liberal Party of Canada and to have him replaced with none other than the most sinister Canadian alive today, the Jewish warmonger Chrystia Freeland!......

Yes, I have also been blasting that evil witch Freeland here at this blog for the last year at least, and especially since SHE is Canada's so called "Foreign Minister" and was the creature responsible for running Canada's attempt to overthrow the peaceful and innocent government of Venezuela last spring..... This sinister creature is absolute pure evil,and sadly the Liberals are seriously considering her to be their next leader!

Well, my fellow Canadian truth seeker, Greencrow (www.greencrowasthecrowflies.blogspot.com), who of course hails from the wild and wooly parts unknown called southern British Columbia, has also taken notice of the evils of Chrystia Freeland, and she just put out a brand new article where supposedly Chrystia Freeland was at a "Town Hall" meeting recently, and several protestors came to that town hall meeting and screamed the truth about her being nothing more than a sinister and evil warmonger!  Here in fact is Greencrow's article about this important event, and I do have further thoughts and comments to follow: 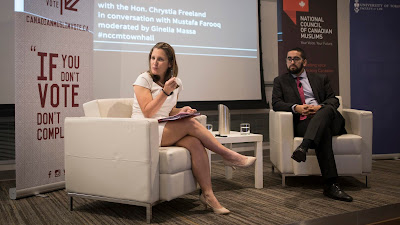 Chrystia Freeland at Townhall
h/t to Xymphora for link

Like other alternative/truth bloggers, I've been wondering where Canadian Liberal Cabinet Minister/SorosCIAn mole Chrystia Freeland is during all the brouhaha about Trudeau's blackface.  She's kept an unusually low profile.  But she suddenly emerged yesterday at a town hall--that had to be cut short due to unruly protesters.  Please read the following story that appeared in CityNews and I will have more comments to follow:

A town hall with Foreign Affairs Minister Chrystia Freeland held by the National Council of Canadian Muslims was cut short Sunday after protesters calling her a “war monger” repeatedly interrupted the event in Toronto.

Protesters held up signs raising issues such as Venezuelan independence while another at one point held up a sign that read: “Save Yemeni Children.”

“If you’re for democracy, why do you condone the sale of weapons of mass destruction to Saudi Arabia,” said one unidentified man. “Why are you waging economic war against the people of Venezuela who have done no harm to Canada?Why are you a war monger?”

After several interruptions, organizers stopped the event titled “What’s at stake this federal election” held at the University of Toronto.
The town hall came days after the prime minister’s re-election bid was hit by controversy, after images emerged of Prime Minister Justin Trudeau’s past dressing in brown- or blackface as part of costume events.

No direct questions were posed about the images, but in her opening remarks Freeland reiterated her comments from Friday that “racism and intolerance are unacceptable, always and in all forms” and she was “disappointed” when she saw the images.

Freeland said that she accepts Trudeau’s apology, which she believes is “sincere,” but on Sunday told the town hall that its not for her to choose whether or not to accept it or forgive the prime minister.

“He needed to apologize, and he has, to the people who have been really hurt by seeing those images,” the foreign affairs minister told the several dozen people who attended the event.

“And it’s up to those people to make their own judgements about that.”

Greencrow says: LOL.  Wish I could have been there--to see the meagre crowd that showed up,  apparently made up mostly of Truth to Power protesters who were asking Freeland inconvenient questions. These intrepid individuals represent the vast majority of Canadians.  We don't like war and we hate warmongers.  Why can we not have a leader who speaks this reality?  Because we're occupied, that's why.

In summing up this incident, I can suggest that Freeland was given just an itsy bitsy tiny taste of the kind of demonstrations she'll face, coast to coast--should she ever take over from Justin [le Dauphin] Trudeau.
Posted by greencrow at 9:08 AM

NTS Notes:  Here in fact is a short video from Youtube showing that protest at that town hall meeting:


Lets face facts here... Apparently a lot of Canadians are indeed awakened and can see the truth about this most evil and sinister Freeland bitch.... It is so sad though that she is not only seeking re-election in her own constituency this coming October 21st, but is also in the running to be the replacement for Justin Trudeau if he fails to continue to be Canada's Prime Minister as of this coming October 21st...

I again want to thank Greencrow for this one...  It does indeed show that there are some people out there that can see the truth about Freeland and how she is indeed nothing but a blood thirsty warmonger.... The sad part again is that she is one step away from being the leader of this country!


Posted by Northerntruthseeker at 3:12 PM

Good to see others are awake in Canada!

Hey, Penny... Nice to see you... And I just love your recent article concerning the fraud of climate change..

I will probably post that important video in your article here as well.