This Is Not Good: Turkey Shoots Down Russian Su-24M Aircraft - The War In Syria Has Just Been Escalated!

Lets face the facts... The American/Israeli/NATO attempts to destroy Syria have failed miserably with their fake "terrorist" group called ISIS now on the run in Syria.... It would have been only a matter of time before the good guys, the Russian/Syrian/Iranian/Lebanese/Hezbollah allied forces, freed all of Syria from the criminal attempts to have that peaceful nation destroyed....Therefore the US/Israel/NATO criminal cabal have been desperately looking for anything that could further escalate the conflict.... And today it seems they may have done exactly that!

I found out this morning that Turkey has just shot down a Russian Su-24M combat aircraft that they "claim" was violating southern Turkish airspace.... This is a shocking new development in the war in Syria.... To help understand the details of this latest shocking news, I want to present the link to the Daily Mail Online news service article out of the United Kingdom at www.dailymail.co.uk, that discusses the immediate aftermath of this travesty where Russian President Vladimir Putin is saying there will be "serious consequences" for Turkey's actions in this event.... First here is the link to that Daily Mail article here:

Next, I want to present the latest article from a fellow Canadian, Greencrow, who writes "Greencrow As The Crow Flies" at www.greencrowasthecrowflies.blogspot.com, that gives one pretty good explanation for this action by Turkey....Here is Greencrow's article here:

Breaking News this morning.  It would appear that Turkey has taken steps to re-establish its oil theft/smuggling route out of neighbouring Syria.  This morning (Tuesday, November 24, 2015) Turkish jets shot down a Russian SU24 warplane over Syrian airspace.  The pilots apparently ejected safely. 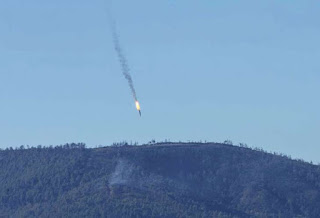 Russian Jet downed in Syria...fired on from ground according to Russians

Now there is a lot of tooing and frowing about whether it was in Syrian or Turkish airspace.  NATO is getting involved.  Yes, they will be bringing in the big guns.  Russia better have China on its side. This is a VERY serious development.
Here is the latest update...the plane was shot down from the ground.


MOSCOW, Nov 24 (Reuters) - Russia's defense ministry said on Tuesday one of its fighter jets was downed in Syria, apparently after coming under fire from the ground, Interfax news agency reported.
The Turkish military said it shot down a plane after it was repeatedly warned about violating Turkish airspace.
But the Russian defense ministry said the Su-24 plane had not violated Turkish airspace. The ministry said the pilots of the jet had ejected and parachuted to the ground. (Reporting by Maria Kiselyova; writing by Vladimir Soldatkin; Editing by Christian Lowe) This is a breaking news update. Reuters' earlier story follows...Ankara, Nov 24 (Reuters) - Turkish fighter jets shot down a warplane near the Syrian border after it violated Turkey's airspace on Tuesday, a Turkish military official said, but the nationality of the downed aircraft was not immediately clear.
Turkish F16s warned the jet over the airspace violations before shooting it down, the military official told Reuters.


Coincidentally, I had just copied a link from "Uprooted Palestinian Blog" where that blogger reports that Qatar had been the go-between between Kiev and ISIS...selling ISIS some anti-aircraft weaponry.  Here is the relevant quote;


The revealed information clearly indicates that the Qatar Ministry of Defense is arranging supplies of the Ukrainian air defense systems to Syria-based terrorist organizations via Bulgaria and Turkey. The US officers in Qatar have approved the deals. Taking into account that “Pechora 2D” system is able to strike the aircrafts at the heights up to 21 km, the investigation of the A321 Metrojet downfall over Sinai may receive an unexpected turn…

You can't just stop Zionist global criminality with a few jets.
Posted by greencrow at 1:33 AM

NTS Notes: OK, I can guarantee the Jew spew media will be going absolutely hog wild today with reports that Russia "violated" Turkish airspace, and that the plane was "rightfully" shot down due to that violation... However, the fact is that Turkey has been pushing their "airspace" into northern Syria itself as part of the NATO/US plan to create a safe zone for their "ISIS" fraud terrorists...

OK, if the Russian plane did in fact momentarily touch into Turkish airspace, there was absolutely no need to have the plane shot out of the sky for according to the liars in the media and our governments, Russia is supposed to be on the same side in this fight against the big bad "terrorists" right? ... Honestly what this proves is that Turkey, the US, NATO, and Israel are absolutely in the war in Syria to not destroy, but to protect ISIS!

And yes, the US is indeed desperate to try to stop Russia's destruction of the tankers that have been illegally and blatantly stealing Syria's petroleum and sending it over the border into Iraq in long convoys under the watchful eyes of the US military itself.... Russia has turned their attention over the last week to these convoys and has indeed been blowing them up by the hundreds!

Yes, the American/Israeli/NATO cabal has been looking for anything to escalate the war against Syria and they may have just found it.... It will be interesting to see what action Russia now takes in retaliation against Turkey for this act and I can guarantee we will not have long to wait... Stay tuned for the next few days will prove to be most interesting indeed...


Posted by Northerntruthseeker at 8:12 AM

That self-important sack of shit, Hollande and his 'rent boy,' Obama, are giving a joint news conference at the WH. Hollande is puffing himself up, showing the world how big his ego is, when everyone knows France hasn't been relevant since they got kicked out of Indo-China back in 1954, but that hasn't stopped them strutting around like bad asses. This display of impotency was/is on all cable news channels, even the business ones and one all local channels, which is telling.

At the same time, NATO's Secretary-General was giving a press conference and said that it was time to 'deescalate' the Turkey-Russian incident and pull back. Whew, that means NATO wants no part of Erdogan's batshit crazy maneuvers in Syria.

My take on it is that the USA, Israel and England have been whispering in Erdogan's ear, slyly telling him that Turkey can be a world power, playing with the Big Boys, all you have to do is to irritate the Bear and when it responds, we'll come to your rescue.

Just like what France and England told Poland about Germany before WWII.

After all, a Turkish president that just built a 100 room mansion must have some trophies to hand on the wall.