The Global Warming Fraud: Here's Proof "Climate Change" Cultists Have Been SCAMMING Americans (And Everyone Else) For DECADES!

Yes, Canada has a new government and a new Prime Minister... And many people living here in Canada are fully aware of one of Justin Trudeau's platforms, which is of course to have Canada sign off on "Climate Change" protocols that are to be put forward very soon at the upcoming Paris Accords on Climate Change... It is therefore so sad that Justin is unaware that it is all a fraud!

As I have stated many times before, there is no such thing as AGW, or man caused "Global Warming"... It is and always has been a scam for nothing more than to fleece our nation's people out of more money and taxes... The real alarming thing that I find is that in spite of my best efforts and many others that have been trying to reach the public about the real truths behind the Global Warming, or as they call it now "Climate Change" fraud, many people are either too brainwashed or too gullible to take notice....

I want to present the following very interesting article that comes from the Refreshing News website, at www.refreshingnews99.blogspot.in, entitled: "Here's Proof "Climate Change" Cultists Have Been SCAMMING Americans For Decades".  As the title indicates, these scam artists have been fooling everyone for decades as it pertains to this "Climate Change" fraud.... I have that article right here for everyone to see for themselves, and of course my own thoughts and comments to follow: 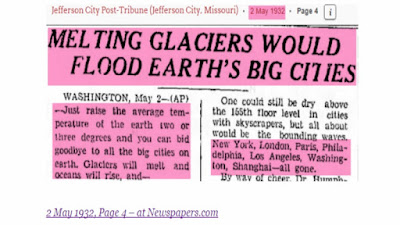 Someone took the time to look up some old news archives and found an amazing thing – the global warming, ice age, climate change cult has been going on for decades, literally.
The article is from 1932 and basically uses the same scare tactics as they did back in the 70s and of course again now.
These people have been scamming Americans for decades only now they are spending BILLIONS of taxpayer dollars to pay for Democrats to continue their scam.
From Twitchy:

Global warming alarmists, including John Podesta, are warning that the flooding of coastal cities due to rising sea levels is imminent due to climate change.
As it turns out, at least they’re being eco-friendly by recycling doom-and-gloom predictions… from over 80 years ago

If these people didn’t have this alarmist B.S. that Democrats go for, most of them wouldn’t even have jobs. 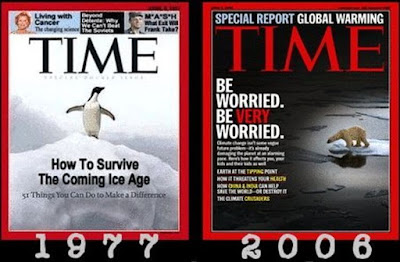 So taxpayers get to pay for a bogus lie that Democrats continue to push based on junk science so ‘global warming alarmists’ in the science community can have jobs.
This has got to be one of the biggest scams in the history of the United States and Americans get to pay for it out of their pockets; with more expensive consumer goods and with job killing regulations.
Way to go Democrats!
Posted by pooja


NTS Notes: Honesty, when the hell will people learn and wake the hell up?   It seems that the only time people will actually take notice is after these scam artists get their fraud Carbon tax system imposed on our nations and it starts hitting everyone in their pocketbooks...

I personally do remember when in the late 70's the fraud artists tried to sell the false idea that the planet was entering a new "Ice age"... It is so amazing how quickly so many people forget ......

Yes, so many nations are going to gather together in Paris shortly to sign off on new accords to "save the planet" from ourselves through the fraud of man caused "Climate Change".... Honestly I hope that on that first day, Paris gets one hell of a cold snap and/or a blizzard just to give these suckers a taste of  the truth that the planet is not warming but is in fact entering a long cold trend...

And about Justin Trudeau going to Paris for these fraudulent accords?  Unless he is part of the scam, I do hope that someone takes him aside and fills him in on the truths about this fraud...

NTS
Posted by Northerntruthseeker at 1:14 PM

I have heard that men have in times past, taken advantage of ignorant people who are not expecting eclipses and so forth, to manipulate them. This article is one example, though I do not know if this particular tale is true or not: